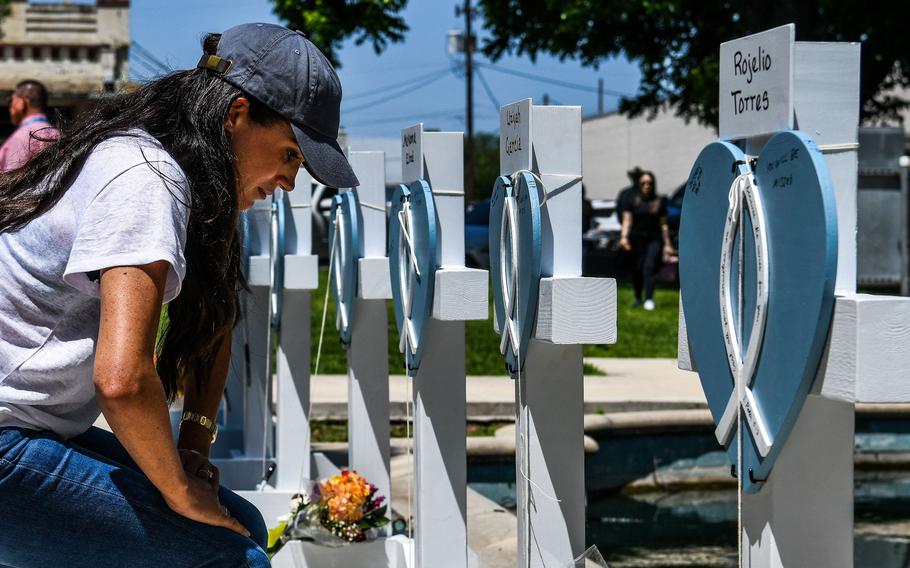 Meghan, Duchess of Sussex, places flowers as she mourns at a makeshift memorial outside Uvalde County Courthouse in Uvalde, Texas, on May 26, 2022. (Chandan Khanna, AFP, Getty Images/TNS)

UVALDE, Texas (Tribune News Service) — Meghan, the Duchess of Sussex, paid a visit to a memorial for the victims of the school shooting in Uvalde, Texas, on Thursday afternoon.

Accompanied by a bodyguard and wearing a baseball cap, white T-shirt and jeans, the former Meghan Markle looked down at crosses left to memorialize the 19 children and two teachers killed in the attack. Ignoring calls from reporters, she placed white roses tied with a purple ribbon at the cross for 10-year-old Uziyah Garcia.

Someone had written on the cross, “You will be missed.”

The boy’s father, Sergio Garcia, 35, of San Angelo, Texas, described Uziyah as an energetic, loving and gentle boy. Garcia hadn’t spend much time with his son over the last eight months, as the boy’s parents were in a custody dispute.

But, Garcia said, that didn’t stop Uziyah from spilling his love for his father in their short moments together.

Garcia said his son always expressed his love. He didn’t say goodbye without saying “I love you,” and wished his dad a good day at work in the mornings.

Garcia sobbed as he remembered teaching his only son how to ride a bike without training wheels, and playing basketball and football with him.

This Sunday, Uziyah was meant to be reunited with his father for summer vacation in San Angelo. He wanted it to be just like last summer, filled with visits to the Dallas Zoo, Six Flags Magic Mountain and Hurricane Harbor.

Or maybe like their most recent spring break — the last time Garcia saw Uziyah — which they spent watching movies, going to arcades and trampoline houses.

“He was my little man,” Garcia said.

Now, instead of planning his vacation with his son, Garcia is waiting for the boy’s body to be released. He drives the four hours from San Angelo to Uvalde, back and forth, as he waits to hear news.

The hardest thing, he said, is imagining what his son’s final moments were. Was he scared? Was he crying?