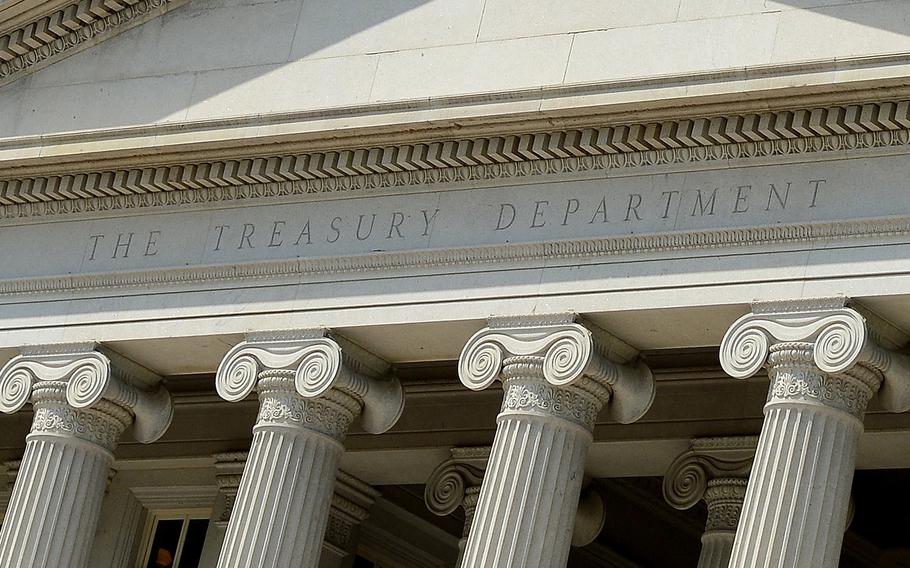 The U.S. Treasury Department building in Washington, D.C., on Aug. 22, 2013. The department’s Office of Foreign Assets Control is expected to let a temporary exemption for Russia lapse once it expires on May 25, according to people familiar with the matter. (Chuck Myers/TNS)

WASHINGTON (Tribune News Service) — The Biden administration is poised to fully block Russia’s ability to pay U.S. bondholders after a deadline expires next week, a move that could bring Moscow closer to the brink of default.

The Treasury Department’s Office of Foreign Assets Control is expected to let a temporary exemption lapse once it expires on May 25, according to people familiar with the matter. The waiver, issued shortly after the U.S. levied sanctions on Russia over its invasion of Ukraine in February, has given Moscow room to pay coupons, helping it avert default on its government debt.

The end of the carve-out could be the final straw in Russia’s debt saga after almost three months of war in Ukraine. It’s managed to make all its payments to creditors so far, weaving through the tangle of sanctions that closed off some avenues.

That includes an 11th-hour escape earlier this month, when blocked payments were eventually allowed through after Moscow tapped its domestic dollar reserves. But it’s unclear how it can sidestep the end of the U.S. loophole.

Some Treasury officials had privately argued that allowing Russia to pay its debt would further drain its coffers and redirect resources that would otherwise be spent on weapons and military operations in Ukraine. But the administration has decided against extending the waiver as a way to maintain financial pressure on Moscow, the people said.

Another person familiar with the matter said that Treasury hasn’t made a final decision. Spokespeople at the White House and Treasury Department had no immediate comment.

Ultimately, any impact on Russia’s finances from payments to creditors is dwarfed by the money the country is earning every week on exports of oil, gas and other commodities.

“It is an interesting one,” said Matthew Vogel, a London-based portfolio manager and head of sovereign research at FIM Partners. The move would leave Russia as “a debtor seemingly desperate to make payments, but not allowed to do so.”

Moscow’s next debt payments are due May 27, on foreign bonds maturing in 2026 and 2036. The former is dollar-denominated but allows for payment in euros, Swiss francs or sterling, as well as for interest payments in dollars to accounts in Switzerland, the U.K. or the EU.

The euro-denominated 2036 bond has an additional clause allowing payment in rubles.

But given the U.S. decision effectively stops U.S. investors from getting money from Moscow, those clauses may not be enough to allow Russia to sidestep tougher restrictions.

If Russia does find a route, the next sovereign transfer stipulating payment in dollars is on June 24, when the interest on a 2028 sovereign note comes due. Overall, Russia is staring down more than $490 million in foreign-currency bond payments owed to creditors by the end of June.

“It continues to be our baseline scenario that a default will happen,” said Carlos de Sousa, an investor at Vontobel Asset Management in Zurich. “I don’t know why the U.S. would renew the carve-out. Russian sovereign debt is very low, they still have resources and some money flowing in. So for them to continue to service the debt is not too onerous. The Russian government just wants to keep the reputation.”