Russian debt payments confront US Treasury with a tough call 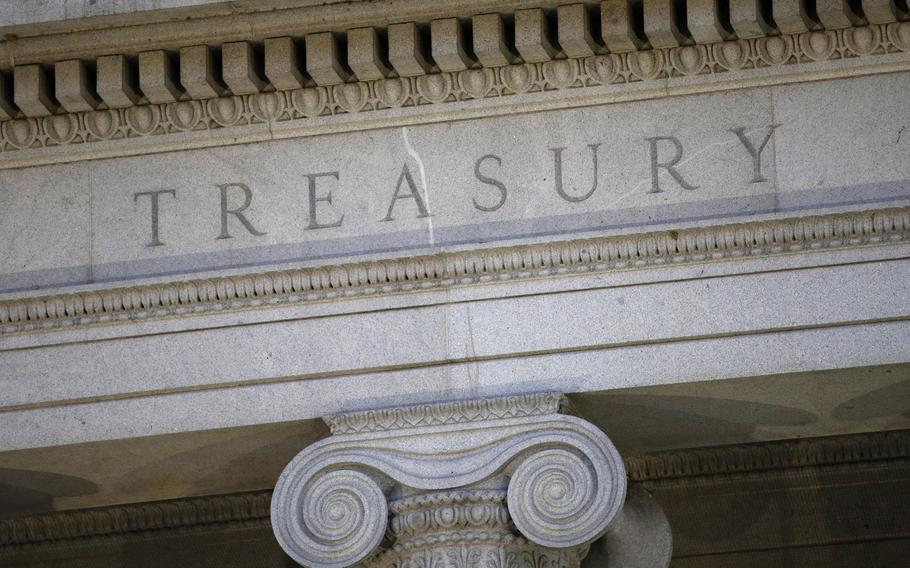 Treasury Secretary Janet Yellen said Tuesday that the matter is being “actively examined” before a crucial deadline in two weeks, and a decision will be made shortly. (Patrick Semansky/AP)

As Russia faces another round of payments on its sovereign debt, Biden administration officials are weighing whether forcing Moscow into default for its invasion of Ukraine would really be the best outcome.

Treasury Secretary Janet Yellen said Tuesday that the matter is being “actively examined” before a crucial deadline in two weeks, and a decision will be made shortly.

Russia is constrained by economic sanctions over its invasion of Ukraine and won’t be able to service its foreign debt, unless the U.S. acts before May 25 to extend a license that permits American banks and individuals to accept the payments. The Treasury could grant exceptions for certain cases.

“We want to make sure we understand what the potential consequences and spillovers would be of allowing the license to expire, and we have not yet made a decision,” Yellen said without elaborating on the pros and cons.

Although it’s not unusual for such licenses to be extended — Venezuela is a recent example — Russia’s situation is unique because President Vladimir Putin’s forces are engaged in active military operations against a U.S. ally that’s being armed with American weapons. Any easing of penalties on the country could be viewed as a concession, according to Timothy Ash, a senior strategist at Bluebay Asset Management.

“If they do extend the license, the market assumption will be that the financial stranglehold on Russia has eased,” Ash said. “So they’ve got themselves in a bit of a tangle actually.”

Some Treasury officials have argued privately that allowing Russia to pay its debt would further drain its coffers and redirect resources that would otherwise be spent on weapons and military operations in Ukraine, according to a person familiar with the matter who discussed the internal deliberations on condition of anonymity.

Additional concerns include limiting the impact of the sanctions on the financial systems of the U.S. and allies and not hurting American investors in Russian bonds. There’s also concern that if Russia is unable to pay its bondholders, and a default is declared, that the country could contest its liability in any legal proceedings that would follow.

“Ultimately, I think that the U.S. and its allies still see an interest in the Russian government paying their American and global investors, especially if it drains Russia’s new assets,” said Rachel Ziemba, an adjunct senior fellow at the Center for a New American Security. “We could see additional restrictions on what funds Russia can use for these payments or other tweaks, but my hunch is that a version of the general license will be extended. This reflects a preference to allow payment for global investors who made investments legally at the time.”

Others, including Ash, counter that forcing Russia into default would have a greater impact on its ability to sustain the Ukraine invasion than trying to drain the assets via bond payments, which represent a fraction of what the country takes in every day through energy sales.

“Should U.S. national security interests be driven by the profit and loss of a few bondholders who made the wrong call?” Ash said. “I don’t think so. These are professionals, they should have known better.”

Payments due May 27 on two of Russia’s foreign bonds, which mature in 2026 and 2036, can be made in currencies other than the U.S. dollar, according to their covenants, so the impact of the May 25 deadline may not be felt until later in the summer if the U.S. doesn’t extend it. The bonds due in 2036 are denominated in euros.

The next sovereign transfer stipulating payment in dollars is on June 24, when the interest on a 2028 sovereign note comes due. Overall, Russia is staring down more than $490 million in foreign-currency bond payments owed to creditors by the end of June.

Russia has so far been able to stave off a messy external debt default, though measures imposed against the nation have already severely complicated payments, hindering and blocking the movement of money.

Should Treasury extend the waiver, Russia should be able to keep paying via its unsanctioned banks so long as it has the dollars and other currencies available domestically. For now, Moscow has plenty of cash, thanks to the billions flooding in weekly from its sales of oil, gas and other commodities, including to Europe.

But if the waiver ends, and regulators in the European Union and UK impose similar restrictions, default would be back on the table as another important payment route is cut off.

One other wrinkle: Russia continues to be able to sell its oil and gas to the European market. The countries that have imposed sanctions on Russia, including the US, have an energy exemption in the penalties, a reflection of how vital the supplier is to European buyers. Though most European nations aspire to phase out dependence on Russian oil imports by year-end, Russia can afford to continue making coupon payments for the foreseeable future, provided it abides by the terms of the bonds. But that’s only if the U.S. extends the general license allowing the payments beyond the May 25 deadline.

“As long as energy transactions are permissible and Russia is using unsanctioned banks, it will continue to be able to fund its financial obligations,” said Daniel Tannebaum, a partner at Oliver Wyman. Citing a payment that was made in late April on two bonds, he said, “The coupon payment was due in dollars. Rubles would have been a default.”

Without commenting on the May 25 deadline, Deputy Treasury Secretary Wally Adeyemo said in a Bloomberg Television interview this week that “the truth is that Russia now has to make choices.”

“And that’s exactly what we want them to do — to have to choose between using their resources to prop up their economy or to fight their war in Ukraine,” Adeyemo said. “And we want to continue to make that choice even harder by continuing to level sanctions until the invasion ends.”