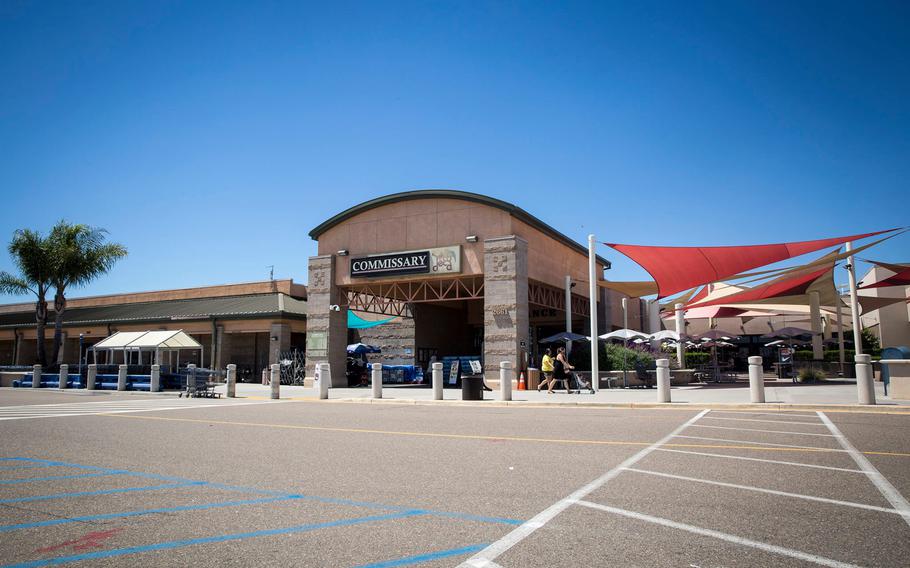 (Tribune News Service) — At last, some military commissaries are trying their own version of Instacart.

U.S. Military Academy graduate Harold Earls IV, 29, was in town last week to check in on commissaries at the Miramar Marine Corps base and Naval Base San Diego at 32nd Street, where he said the service will roll out June 1 for a 90-day trial. His company, YouUp, won the West Coast contract covering three bases, including one in Washington state.

The idea blossomed when he was stationed at the Army base in Fort Myer, Va., in 2020. Earls was shopping at the local Giant supermarket with his wife, Rachel, and their two young boys.

The Earls were entitled to shop at the commissary, where they could buy groceries at cost. Instead, with little kids and little time, they found themselves relying on a supermarket near their house because it was easier and more convenient.

The West Point graduate took his wife's complaint to heart upon retiring from active duty.

He enlisted his friend and mentor, Douglas Vercellotti, former chief of staff of Dell Technologies, to help formulate a business plan and assemble a core team of veterans with business experience.

"We were just trying to solve a problem that existed in our own military community," Earls said. "We reached out to the commissaries, and they said they were interested." As it turned out, the U.S. Defense Commissary Agency (DeCA) was formulating a similar e-commerce concept.

Earls' goal was to make shopping more convenient, along with reviving flagging commissary sales, to enable commissary operators to negotiate greater discounts from suppliers and distributors which, in turn, would be passed on to customers.

Commissary groceries are sold at cost by government mandate and not subject to sales tax. The YouUp plan would include the 5 percent fee for the commissary, plus, to cover its operating expenses, a delivery charge of roughly $4.

Currently, commissary shoppers get a mandated 23.7 percent savings even after the 5 percent commissary use surcharge is deducted.

There is another benefit — the hiring of military spouses (reported to be 22 percent underemployed compared to their civilian counterparts) and veterans with military base access to deliver the groceries.

The website, www.YouUp.us/Hire, currently is soliciting applications for deliverers, or carriers, who will be paid $20 an hour, plus customer tips. Unlike Instacart workers, they don't actually shop in the store but pick up orders bagged by commissary workers and placed at the curb.

That's because the Defense Commissary Agency began instituting a CLICK2GO online order system with curbside pickup in 2019. The pilot home delivery program is an extension of that service.

Earls said his company is led and staffed by veterans, members of Gold Star families who've lost a loved one on active duty and military spouses.

One of the newly hired carriers is Valerie De Castro, a Camp Pendleton mom with a 9-month-old baby and a toddler, age 4. She heard about the program through a military spouse Facebook group and signed up.

"I have my kids with me all the time," De Castro said. "This is an opportunity to make some money and help support my kids so they have the opportunities in life I want to give them." A couple of her friends also have applied as carriers.

The program won't just target off-base shoppers. "I know some families living on base who don't own a second car," De Castro said. When a spouse is working, they often ask if anyone can pick up commissary items for them.

Neeley McAllister, a Gold Star widow who lives in Virginia, is in charge of hiring community leaders and drivers for YouUp. She estimates about 50 delivery drivers have been hired so far in San Diego. They are a mix of military spouses, veterans and military retirees, with about half living on a base.

"Some spouses have been so excited, they've posted about it on their own Facebook pages," said McAllister, who is relying heavily on word-of-mouth, military group social networking and military publications to get out word about the new service.

If the three-month pilot project goes well, Earls foresees the program being rolled out to all 236 commissaries here and abroad, eventually employing as many as 3,000 workers.

This may help stem hemorrhaging commissary sales. Defense Commissary Agency figures show a drop from $6.09 billion in sales in 2012 to $4.5 billion in 2019.

Plus, shopping online became a way of life during the pandemic, and delivery services are flourishing.

It's also a long overdue convenience for veterans, disabled vets, widowed spouses and others.

Ninety percent of commissary-eligible shoppers live off-base, according to the Defense Commissary Agency. Many, especially moms with young children, have neither time nor fortitude to brave the often-long lines for entry.

This also will open the door to many who retain commissary privileges but currently don't have credentials necessary to enter a base.

The delivery service applies only to commissaries, not base exchanges, which sell non-grocery items and already accept online orders for shipping.

The YouUp.com service is being offered only online, although an app may be added. Beginning June 1, same-day delivery will be available within three hours of ordering on Mondays through Fridays.

"We would like to be part of the solution," Earls said.