California will be ‘a beacon of hope’ for out-of-state abortion seekers, say leaders 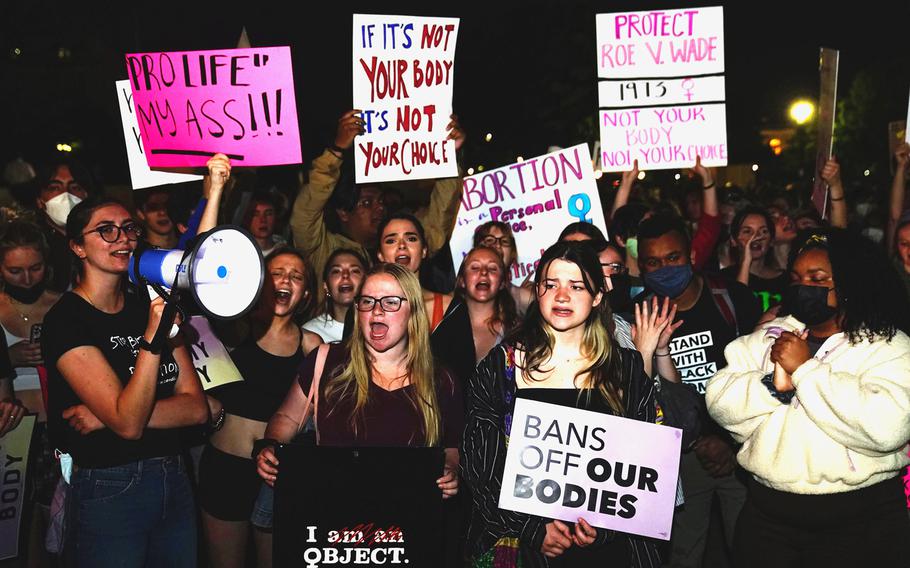 A crowd gathers outside the Supreme Court on May 2, 2022, after a purported leak indicates that Roe vs. Wade will be overturned. (Kent Nishimura/Los Angeles Times)

SACRAMENTO (Tribune News Service) — Defiant California leaders stood ready Tuesday to protect residents and nonresidents alike from any federal rollbacks of abortion rights, though they could face significant challenges in expanding the state’s capacity to serve as a haven for those arriving from outside its borders.

Gov. Gavin Newsom and Democratic leaders quickly announced plans for a constitutional amendment on the November ballot that would ask voters to ensure permanent abortion access in the state, regardless of the U.S. Supreme Court’s final decision on whether to revoke existing rights granted under the landmark case Roe vs. Wade.

At a news conference Tuesday, Democratic members of the California Legislative Women’s Caucus vowed to be “a beacon of hope” to those who live in states where abortion access is already limited and could disappear altogether.

“We will not leave the women and families impacted by the backward, reckless policies of other states without options,” said Senate President Pro Tem Toni Atkins (D-San Diego).

While the timing of Monday’s disclosure of a Supreme Court draft opinion to overturn the landmark 1973 ruling was a surprise, California officials have been preparing for this moment for years. In 2019, the California Future of Abortion Council launched an effort to counter a federal rollback. More than a dozen bills are pending in the Legislature to bolster abortion services.

In March, Newsom signed a law to make abortions cheaper for people on private insurance plans. And earlier this year, Atkins introduced Senate Bill 1375, which would include abortions among the services nurse practitioners can perform without the oversight of a doctor — an effort sparked by reports that more than 40% of California counties do not have clinics that provide abortions.

“We already have access issues in the state of California. We don’t have enough providers,” Atkins said Tuesday.

Those challenges could grow if lawmakers make good on their promise to open California’s doors to those in other states seeking help. As many as 1.4 million women could travel to California every year seeking abortion care — an increase of almost 3,000% — if other states ban the procedure, according to the Guttmacher Institute, a research organization that supports reproductive health and abortion rights.

Costs for the state would almost certainly rise if that happens, though Atkins said Tuesday the price tag is “hard to determine.” California would likely have options: last week, her budget staff estimated a state budget surplus of as much as $68 billion by the early summer of 2023.

Other proposals regarding funding include a bill that would create a state-administered fund for abortions that encourages private-sector donations, “so that the state funds don’t have to provide alone for this influx,” state Sen. Nancy Skinner, D-Berkeley, the author of Senate Bill 1142, said Tuesday.

“We are going to do our best to create a welcoming and safe environment with the ability to support (nonresidents), and we will see how that works once we have the fund established,” she said. “We know that wealthy women will always have choice; others will face death. But California will be the national beacon for reproductive justice. We hope and ask that other states be so bold.”

Even before Monday’s leak of the draft Supreme Court opinion, California abortion clinics were seeing an influx of patients from Texas, according to Jodi Hicks, chief executive and president of Planned Parenthood Affiliates of California.

“I could not be more devastated for the people in other states that are going to be facing what they’re going to be experiencing,” she said, while reiterating that the high court’s decision is not yet final. “I just want to make sure that we’re telling those stories, that we’re talking about people that have never traveled outside of the state that they live in right now, and now they have to navigate how to travel, how to navigate a public health system that is hostile to their needs at a time when they’re most vulnerable.

“We’re learning as we go,” she added.

The Santa Clara County Board of Supervisors on Tuesday approved a budget proposal for $3 million to expand services for Planned Parenthood Mar Monte, the largest Planned Parenthood facility in the U.S., citing an increase in demand. Providers there report that they are expecting 200 to 500 more abortion seekers from out of state per week due to the possible Supreme Court action.

Dr. Amir Nasseri, an OB-GYN at Her Choice Women’s Clinic in Santa Ana, said he’s prepared to receive more out-of-state patients. He could likely double or triple his patient load and is willing to extend his hours into evenings and weekends and hire more physicians if there is a demand, he said.

The clinic currently terminates an estimated 80 pregnancies a month, he said. Until six months ago, it was mainly locals who came for abortions. But after Texas enacted a strict law banning abortions after six weeks of pregnancy, the clinic received about a dozen calls a week from women in the red state seeking to terminate their pregnancies. Even so, only half show up.

“The other half cancel or don’t show up because they cannot secure the time or funds for travel,” Nasseri said. “Some can’t coordinate child care for their existing children. My guess is that for every patient we are seeing, there is probably a dozen or more who want to come and see us but cannot. They cannot afford the travel costs.”

“You have to remember that some people don’t do a lot of traveling. They don’t have the means to do that,” Perrucci said. “They also have children at home that need taking care of. They may also be taking care of adults in their household. We forget all the nuance of poverty and how poverty is restrictive of freedom.”

An amendment to the California Constitution to enshrine abortion rights into state law must be approved by a supermajority in both legislative houses by the end of June to get a place on the Nov. 8 statewide ballot.

According to a poll conducted last year by the nonpartisan Public Policy Institute of California, 79% of likely voters said they did not want Roe vs. Wade overturned.

Skinner said at Tuesday’s news conference that the draft court opinion, if it’s published, would be about more than abortion rights — it would be “about denying the will of the people.”

Despite California’s reputation as the most friendly state to abortions, leaders on Tuesday said securing access for residents will not be enough.

“California has been and will continue to be a beacon of hope and a refuge for reproductive justice and health for anyone and everyone, but justice won’t be realized until women across the United States regain their full autonomy of their bodies,” said Assembly Member Cristina Garcia, D-Bell Gardens.