Abortion has long been complicated for Biden, now he leads the fight 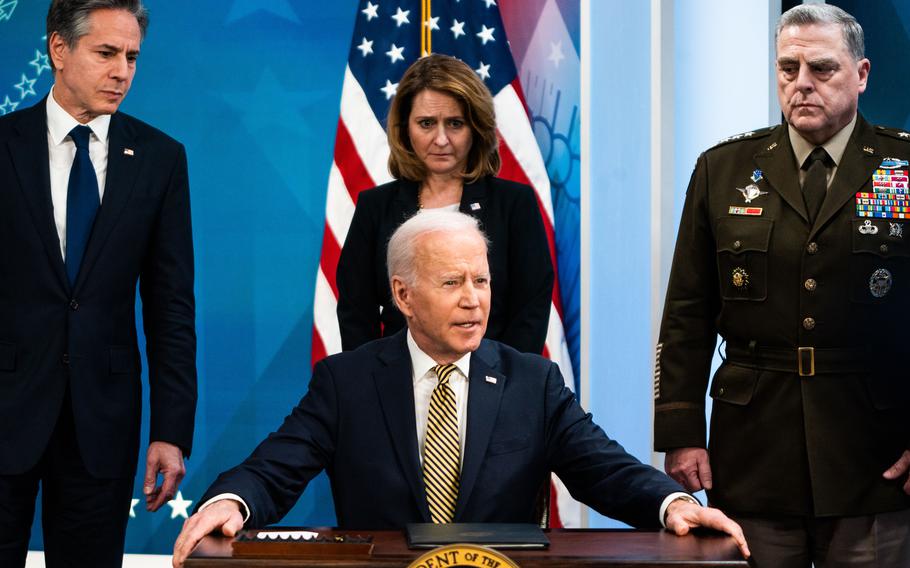 President Biden speaks to the news media on March 16. He is backed by, from left, Secretary of State Antony Blinken, Deputy Defense Secretary Kathleen Hicks and Gen. Mark A. Milley, chairman of the Joint Chiefs of Staff. (Demetrius Freeman/The Washington Post)

WASHINGTON — Joe Biden became a senator in 1973, just 17 days before the Supreme Court decided the landmark abortion rights case Roe v. Wade. Soon after, the young senator, a practicing Catholic, told an interviewer that he disagreed with the decision and that he had views on such matters that made him “about as liberal as your grandmother.”

“I don’t like the Supreme Court decision on abortion. I think it went too far,” he concluded in 1974. “I don’t think that a woman has the sole right to say what should happen to her body.”

Nearly a half-century later, with Biden evolving along with his party on the issue of abortion rights, he again declared the court was moving too far — this time, he argued, in the opposite direction.

“The idea that we’re going to make a judgment that is going to say that no one can make the judgment to choose to abort a child, based on a decision by the Supreme Court, I think, goes way overboard,” Biden said on Tuesday in reaction to a leaked Supreme Court draft opinion proposing to overturn Roe v. Wade.

Throughout his career, Biden’s views on abortion — at least as a political matter — have steadily shifted in a way that has in recent years placed him in line with his party but at uncomfortable odds with his church. And now that he has become the second Catholic president in U.S. history, he suddenly finds himself the country’s highest-ranking champion of abortion rights as it faces its greatest challenge since Roe.

“It concerns me a great deal that we’re going to, after 50 years, decide a woman does not have a right to choose,” Biden told reporters as he boarded Air Force One on Tuesday.

Abortion has long been a vexing issue for some Catholic Democrats, and Biden has been openly conflicted over it. While as president he has been an ally of abortion rights groups, he has also almost never used the word “abortion,” as though he finds it uncomfortable — or politically risky — to do so.

But as a clear supporter of abortion rights, he has been at odds with a group of American bishops, with some refusing to offer him Communion and others saying the president — who attends Mass almost every weekend — has no right to call himself a serious Catholic.

“For Joe Biden, his gap from the institutional leadership of the church in this country and also in the Vatican is widening,” said Massimo Faggioli, a Villanova University theology professor and author of “Joe Biden and Catholicism in the United States.” “Because politically, he has to defend Roe v. Wade, to legislate on it probably. That will expose him to even more accusations that he’s a heretic, he’s not a Catholic, and that all Catholics who voted for him are heretics.”

The only other Catholic president, John F. Kennedy, confronted more open prejudice for his faith and famously gave a speech to Protestant ministers two months before the election to clear the air.

“I believe in an America where the separation of church and state is absolute, where no Catholic prelate would tell the president, should he be Catholic, how to act, and no Protestant minister would tell his parishioners for whom to vote,” Kennedy declared.

But Kennedy was elected more than a decade before Roe v. Wade, so he did not confront the conflict over abortion as Biden does.

“He is a Catholic president who has no real majority in Congress, but even less in his church,” Faggioli said of Biden. “This is a problem that Kennedy did not have.”

And while Biden has received support from the Vatican, with Pope Francis welcoming him and protecting him from the sometimes-vocal criticism of his American coreligionists, that relationship could now grow more complex. Biden, as the nation’s most prominent Catholic, could shift from defending an existing law — one that has been accepted precedent for nearly a half-century — to actively pressing for new legislation to codify abortion rights in law.

It could also mark a new role for Biden himself. In five decades of public life, he has sometimes signaled unease with going against church teachings, but now he has a political imperative to do just that, and in a high-profile way.

“He is the most prominent Catholic political spokesman right now, and this is a uniquely important period for him to have a strong voice on the issue,” said Mark Rozell, who co-edited the book “Catholics and US Politics After the 2016 Elections.”

Biden’s complex feelings on abortion — an apparent discomfort, combined with a sense that the procedure should not be banned — mirror those of many Americans, however. Because of that, Rozell suggested Biden’s message could resonate if he handles the issue forthrightly.

“If he can speak forcefully and effectively on this issue, representing the angst that not only Democrats but swing voters feel, that could be transformative in this election cycle,” said Rozell, dean of the Schar School of Policy and Government at George Mason University. “It is a compelling moment for the president.”

Biden on Tuesday nodded toward some of his own views, with a reference to St. Thomas Aquinas, the 13th-century theologian.

“Roe says what all basic mainstream religions have historically concluded, that the existence of a human life and being is a question,” Biden said. “Is it at the moment of conception? Is it six months? Is it six weeks? Is it quickening, like Aquinas argued?”

A White House official, speaking on the condition of anonymity because they were not authorized to be identified, said that Biden “has been very consistent over the years that he will not impose his personal faith on others” and that the president supports codifying Roe v. Wade.

The position Biden landed on for much of his career has been to support abortion rights but oppose federal funding for the procedure. At times, he has opposed such funding even in cases of rape and incest, a position that aligned him with Republicans but put him out of step with other prominent Catholic Democrats such as the late senator Edward M. Kennedy.

For decades, Biden also supported what’s known as “Mexico City policy,” which prohibits U.S. funding for foreign organizations that perform or actively promote abortion. And in 1982, Biden was among the few Democrats to vote for a constitutional amendment that would have let states bypass Roe v. Wade and restrict abortion.

At the time, Biden said it was “the single most difficult vote I’ve cast as a U.S. senator,” adding, “I’m probably a victim, or a product, however you want to phrase it, of my background.”

As he approached his 2008 presidential campaign — he dropped out and ended up becoming Barack Obama’s running mate — he mused about the tension between his faith and his political role. “I’m a practicing Catholic, and it is the biggest dilemma for me in terms of comporting my religious and cultural views with my political responsibility,” he said on NBC’s “Meet the Press” in April 2007.

To his hometown paper, he described himself as “middle-of-the-road” on abortion and conceded that “I may not be what the party’s looking for. . . . I may not be ‘pure’ enough about abortion rights.” Biden noted that he had voted to limit so-called partial-birth abortion — but had also opposed restrictions to Roe v. Wade. “And so,” he said, “I’ve made everybody angry.”

As Biden entered the 2020 presidential primaries, he found himself needing to appease a Democratic Party that had shifted, becoming more emboldened and unified on abortion rights, as well as women’s rights more generally.

A key moment during his presidential campaign came when he reversed his long-held position on the Hyde Amendment, which prohibited federal funding for abortion. He was initially resistant to changing but faced an uproar within the party.

So one night in Atlanta, he read from his notes, deviating from the teleprompter to reverse the position he had held for four decades, saying the growing assault on Roe had persuaded him circumstances had changed. It was a sign to abortion rights groups that he was willing to shift and oppose the Hyde Amendment.

“The Biden administration is absolutely an ally in the fight for reproductive freedom and protecting abortion access,” said Sam Lau, the senior director of advocacy media at the Planned Parenthood Action Fund. “At the same time, more can and must be done to blunt the barrage of attacks.”

Biden, in fact, told Planned Parenthood Action that as president he would be an ally.

“We will protect women’s constitutional right to choose,” he said in a June 2020 video. “I am proud to stand with you in this fight.”

They didn’t know at the time how fierce the fight would ultimately become.