Fear and dislocation: Ukrainian students in US warily watch the war 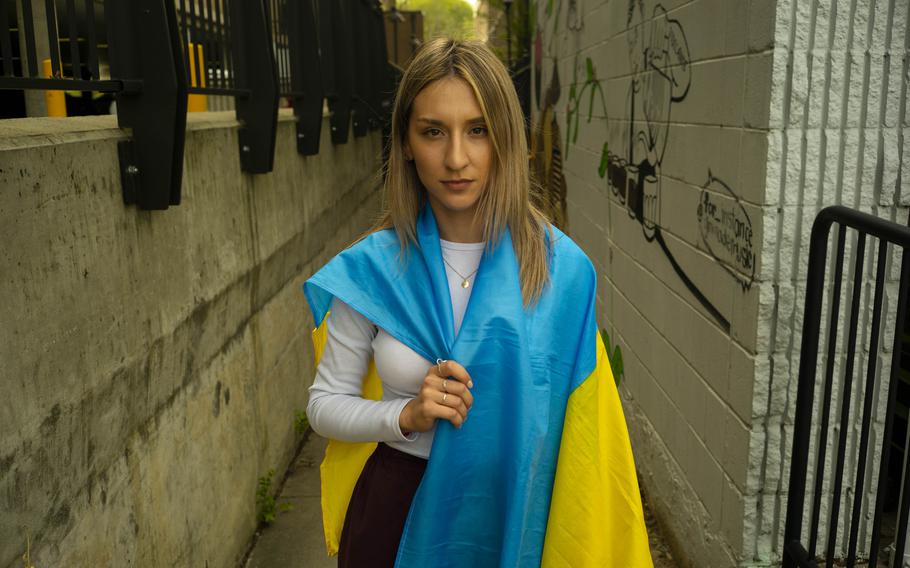 Tetiana Tytko, a graduate student at the University of Maryland from Lviv in western Ukraine, said that when the bombing began, she didn’t know what to think or what to do. When she saw streets where she used to live and work shelled, she was at first unable to believe it was real. “I was completely delusional,” she said. (Robb Hill/for The Washington Post)

When Solomia Dzhaman thinks of Ukraine, she thinks of her grandparents’ farm — plucking ripe strawberries to eat, pulling apples off trees in the orchard and picking currants off the vine so her grandparents could sell them at the market.

“Pastoral, tranquil memories like that,” she said. “That’s the scene that’s been playing in my head when I think about Ukraine.”

She’s trying to hold on to the images of the home she knew, not the images that saturate the news now: men with gunshots to the head lying in the road, people fleeing over bridges, bombs shattering homes. She left the campus of Columbia University, unable to concentrate on her engineering classes in-person while friends are on the front lines and relatives are living in fear.

The war has upended life for Ukrainian students in the United States, and spurred university and federal officials to take quick action to help.

For some students here on a visa, it opened questions about when and whether they could safely return. For some settled here more permanently, it surfaced painful emotions about home and heart and how best to help in a humanitarian crisis. And for some Ukrainian students, the war kept them from continuing their studies abroad this spring, as they crossed borders to flee the violence — or turned to help the fight.

While his classmates are on campus, he is in the midst of war.

“Many towns are completely destroyed,” he said. “Many cities are experiencing complete humanitarian disaster: no electricity, no gas, no light, no water, nothing at all. They’re just simply dying.”

He and others began working in a volunteer battalion, making Molotov cocktails, cooking food, driving aid to military posts. Now he is raising money for thermal visors, bulletproof vests, radio transmitters and other military supplies.

“We are defending our freedom,” Tymoshchenko said.

Within days of the outbreak of the war, U.S. higher education leaders joined to ask federal officials for help supporting the roughly 1,700 Ukrainian students enrolled here. In March, the U.S. Department of Homeland Security designated Ukraine for temporary protected status for 18 months, allowing students whose visas are about to expire to apply to stay in this country.

As weeks go by, it’s increasingly clear that it will be difficult for many Ukrainians to return home anytime soon, said Barbara Snyder, president of the Association of American Universities.

Schools and organizations have responded with individual support and, in some cases, broader efforts to assist students.

The Institute of International Education has multiple efforts to help, and has already distributed emergency grants to more than 225 Ukrainian students, according to Jonah Kokodyniak, a senior vice president at the organization.

Hampton University, a historically Black university in Virginia, offered to fund tuition, room and board for the summer semester for 50 to 100 students studying in Ukraine.

Columbia University, which offers a full scholarship for displaced students, also launched efforts including emergency fellowships for scholars from Ukraine.

And at many colleges, students and others organized relief efforts and fundraisers. At Johns Hopkins University, four Peabody Conservatory graduate students, including a flutist from Ukraine, organized a benefit concert last week that closed with a melody by the late Ukrainian composer Myroslav Skoryk.

Students described horror and uncertainty as they tried to balance the unthinkable overseas with logistical hurdles here. A pregnant student at Columbia wondered if her husband would be able to join her in New York since she will not go home to Ukraine after the semester ends. A graduate student who fled to Poland before the war broke out has been juggling his studies at Berkeley very early in the morning with his work during the day, his 2-year-old daughter and evenings helping refugees at the border.

Others report the trauma of watching from afar. Tetiana Tytko, a graduate student at the University of Maryland from Lviv in western Ukraine, said that when the bombing began, she didn’t know what to think or what to do. When she saw streets where she used to live and work shelled, she was at first unable to believe it was real. “I was completely delusional,” she said. She would wake up not wanting to look at her phone, afraid of the news she might see but unable to think about anything other than the war.

Though her parents were glad she was safely out of the country, she found it painful not to be there. When her family is in bomb shelters, she’s unable to reach them.

She and others at Maryland created a Ukrainian student group and began raising money, collecting and filling old suitcases with tourniquets and other emergency medical supplies. “It never feels like we are doing enough,” she said.

The university’s police department donated 20 used body-armor vests that have been shipped to Ukraine. David Mitchell, the chief of the department, said he had seen television footage of elderly people taking up guns to fight, and doctors, nurses and other volunteers in the line of fire — all without body armor. He said it was overwhelming meeting with Ukrainian students at Maryland and hearing about their aunts and uncles, grandparents and friends “under attack, because they want democracy — they want freedom.”

Mariya Curry, who is studying psychology at Columbia, said many of her relatives live in Irpin and were hiding in their basements for many days without food. “My heart is there,” she said. “I can’t stop crying.”

Dzhaman, who is from the Ivano-Frankivsk region of Ukraine, spent the first days of the war reading the news constantly and trying to help others who needed a safer place to stay, offering shelter with her extended family in the west.

When another Ukrainian student at Columbia University told her about watching the live map of places getting shelled, and seeing his old neighborhood, the places he used to shop, his apartment, on the map, she understood.

They were all “just kind of grieving together,” she said.

Dzhaman, who has U.S. citizenship, sought permission to finish the semester virtually so she could be with her parents and sister in Illinois. She posted on social media asking for donations of blood-clotting products and tourniquets, and was surprised by the volume of response — thousands of dollars’ worth of supplies, which her family has been shipping to Kyiv and Mariupol.

She plans to go back to Ukraine, where she used to spend every summer, to help rebuild when the war is over and revisit her old haunts — if she can. “If all of it gets blown up and bombed ... I’ll never see it again,” she worried.

She paused. “That’ll be the first thing I do when I go back: go to the orchard, sit on the grass, eat fresh strawberries.”