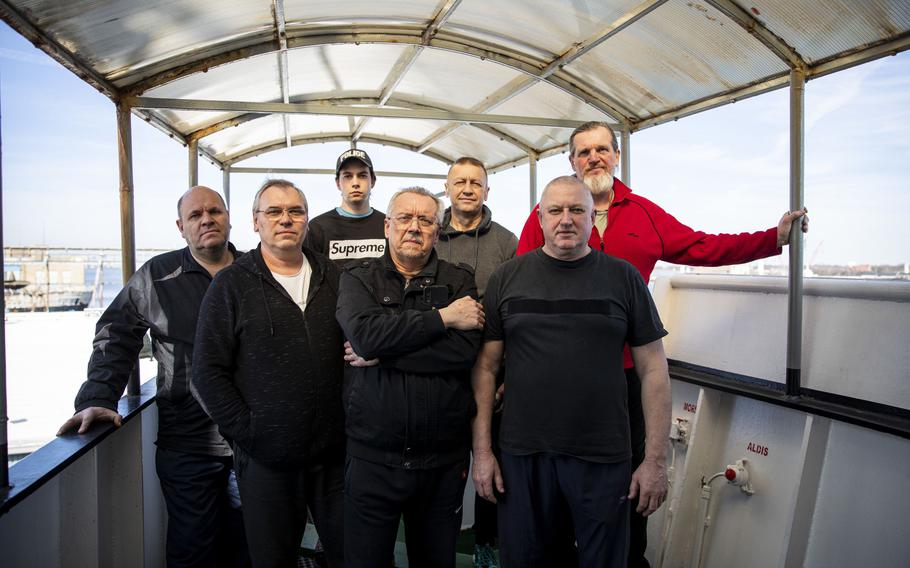 The crew of the Ocean Force has been on the ship since July, following along as their country Ukraine, has been invaded by Russia. From the left, Koval Vadym, 56, second engineer; Vitaliy Boyko, 53, third officer; Taupe Andrii, 19, steward; Gennadiy Shevchenko, 60, captain; Viktor Kushmila, 56, chief officer; Volodymyr Shykhov, 60, chief engineer; and Kuzhbarenko Sergiy, 56, bosun. (Tyger Williams, The Philadelphia Inquirer/TNS)

PHILADELPHIA (Tribune News Service) — The seven Ukrainian sailors who’ve been stuck on a merchant ship docked in Philadelphia as Russia invaded their country have finally been allowed to go ashore — presumably into the embrace of Philadelphia’s Ukrainian community of Philadelphia.

The seafarers left the ship Wednesday morning and were headed to the U.S. Customs and Border Protection office in Old City. Their hope is to receive temporary protective status, which would allow them to live here while their homeland is at war, according to Iryna Mazur, a Philadelphia lawyer and Honorary Consul of Ukraine.

The men were earlier spared from detention, which had been another possibility.

For nine months, one week, and four days, Captain Gennadiy Shevchenko and his crew had been confined to the Ocean Force merchant ship, a 348-foot-long and 66-foot-wide cargo vessel docked first in Delaware then in South Philadelphia, at Pier 82. They’d been performing maintenance and keeping the ship running while attorneys and advocates tried to sort out their future.

Since the Russians invaded the crew’s homeland on Feb. 24, more than 4.9 million Ukrainians have fled their country. The Biden administration has agreed to resettle 100,000 Ukrainians. Those landing in Philadelphia will join about 60,000 émigrés and people of Ukrainian ancestry, one of the largest Ukrainian communities in the nation.

The men have followed the news from their ship. They say they have lost friends in the war, but not family members.

Boatswain Sergiy Kuzhbarenko, 53, has a five-and-a-half-year-old daughter in Mariupol, the war-torn city in southeastern Ukraine where, according to its mayor, more than 10,000 civilians have been killed.

The first opportunity Kuzhbarenko has, he says, he wants to see her face. He misses home “heartily” he said via the captain, who translated for many of the crew members.

Help has come from Barbara Shipley from the International Transport Workers’ Federation, the Seamen’s Church Institute, Mazur, and J. Stephen Simms, a Baltimore maritime attorney, who have been working to ensure the crew received back pay — they got nothing between November and March — and figure out what will happen to the crew.

The heavy load carrier’s previous owner ran out of money, according to a lawsuit filed in federal court in Delaware. On March 1, ownership of the ship changed hands, and the new boss has been paying the crew to keep the vessel running until now, when it can be towed for repair in the Caribbean.

Back in March the crew members were awarded the funds they had not been paid since November. That money will help them settle in Philadelphia’s Ukrainian community until it is safer for them to return home.

In the meantime, they want jobs, their captain said.

But they don’t know if their legal status will allow them to work here. They know little of what awaits them. 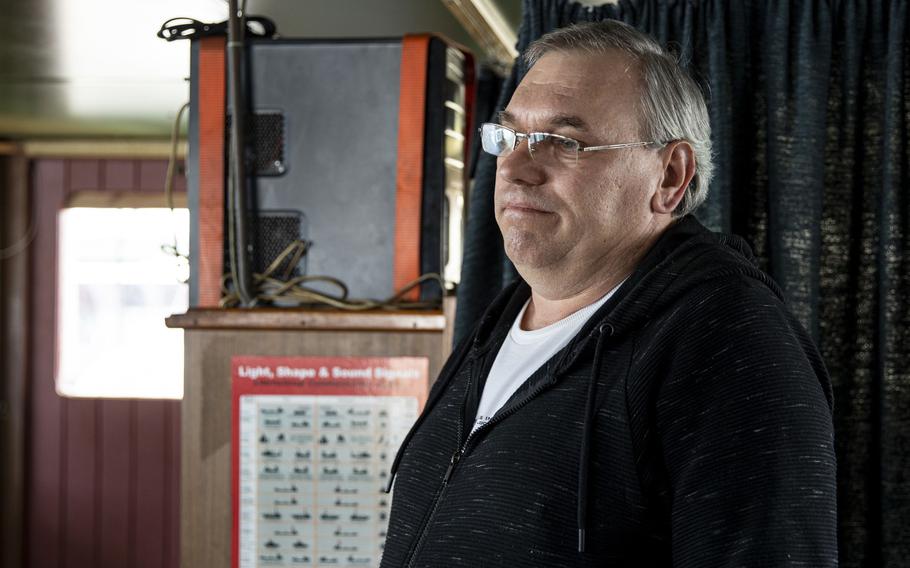 Vitaliy Boyko, 53, talks in the bridge of the ship "Ocean Force," at the Philaport in Philadelphia on March 15. Boyko is among a crew of seven who have been aboard the ship since July. (Tyger Williams, The Philadelphia Inquirer/TNS)

Vitaliy Boyko’s daughter turned 12 on March 14. Throughout that day, the ship’s third officer was able to speak to her and his wife, but being so far away from them tears at him. Watching the news, seeing his country at war, is wrenching.

Once he gets a couple of days of rest, Boyko’s hoping to find work and contribute to the country that’s taken him in — until the first chance arrives for him to return to his loved ones.

“I’m not gonna stay in United States forever,” he said. “What I will do? My family is there, I am here. I will try to earn money and then go back.”

Most of the crew agreed. While they welcome the chance to see the city after spending so many days at sea and docked, they cannot stop thinking about home. Although they said that their families are safe, that doesn’t mean they don’t worry about them.

Most of the crew are from Odesa, which more than one of them called the “greatest city in the world.” The strategic Black Sea port boasts an impressive opera house that is now heavily guarded to prevent Russian attack.

“Every space, every building, they have their own history,” Shevchenko said. “The city is full of history.”

Andriy Tiupa, a 19-year-old steward on the Ocean Force, said he misses his mother, his father, siblings and fiancée. He knew he wanted to be on a ship and be a seafarer, but he didn’t anticipate being so far away when trouble came to his home.

He too wants to rest, then find work so he can provide a little for his family.

As the seven men stood for a group photo in front of the ship one recent afternoon, their mood was bright. This ship, while it protected them for nearly a year, was finally going to be in their rear view.

The men got a small taste last month of what life in Philadelphia may be like. After their initial plight went public, a reader named Jim Malin brought the men hot cheesesteaks from Campo’s in Old City.

By email, he shared the experience: “I had an interpreter and after we prayed over the meal, when I looked up, two of the guys were weeping. Such a sad, tragic situation.”