MUKACHEVO, Ukraine — The commander of Ukrainian forces making a last stand in the southern port city of Mariupol issued a dire warning Wednesday saying his fighters holed up in the Azovstal steel plant were "dying underground."

In audio messages sent to The Washington Post, Maj. Serhiy Volyna of the 36th Separate Marine Brigade, holding out against an advancing and much larger Russian force, appealed for other countries to help them secure a way out.

"While the world is asleep, in Mariupol, the guys are dying," Volyna said. "They're suffering losses. They're being bombed with heavy bombs ... torn up by artillery, and they're dying underground — the wounded and the living there."

His comments came as another deadline set by the Kremlin — for Ukrainian forces in Mariupol to surrender by 2 p.m. local time (7 a.m. Eastern) Wednesday or face a bitter end — expired. Previous deadlines issued by Moscow were also refused.

Russia's state-run news agency Wednesday reported that a "mop-up operation in Mariupol" was "nearing its conclusion," citing a statement from a pro-Moscow separatist group in the area.

A planned humanitarian corridor to evacuate women, children and the elderly from the city also fell through, according to the governor of the Donetsk region where Mariupol is located.

"I don't know when we will be able to unblock Mariupol," Ukrainian President Volodymyr Zelensky said at a news conference Wednesday with European Council chief, Charles Michel, in Kyiv.

Zelensky said that there were two potential ways to end the standoff in the city — either a diplomatic solution or one in which the besieged Ukrainian force is armed with "serious and heavy weapons."

Zelensky said he was open to a diplomatic solution but that "so far Russia does not agree to this."

Volyna, the commander, had told The Washington Post earlier on Tuesday that his fighters did not believe Moscow's promises of safe passage out and would not lay down their arms. He urged global leaders, including President Biden, to carry out an "extraction" of the Ukrainian force from Mariupol, with a third country guaranteeing their safety.

He added that more than 500 forces were wounded and that civilians were also sheltering inside the Azovstal Iron and Steel Works plant under a barrage of fire.

The sprawling industrial facility's underground network of tunnels have provided cover for the Ukrainian fighters in the strategic coastal city, including the far-right Azov regiment.

Russian forces moved into Mariupol and cornered fighters in their last foothold after an assault that pummeled the city and a siege that choked off vital supplies. Taking full control of Mariupol would expand the grip of Russian forces along the Sea of Azov coast and help form a land bridge from the border to the Crimean peninsula that Moscow annexed in 2014.

As the Russian deadline expired Wednesday, an adviser to Zelensky's office, Oleksiy Arestovych, maintained that fighting still raged around the steel plant.

"Mariupol is holding on. Fighting is underway in the vicinity of the Azovstal plant and a few other districts," he said. He added that Ukrainian forces were battling to repel an escalating Russian offensive in the east along multiple fronts.

Street fighting and shelling have thwarted attempts at shuttling people out and prevented a Red Cross team from reaching Mariupol to help civilians out in recent weeks.

The city's deputy mayor, Serhiy Orlov, said Wednesday that food and medical supplies at the steel plant had nearly run out, the BBC reported.

"They have an absolute lack of everything. A lack of water, food, medicines, help, and Russia totally blocks everything, any humanitarian help or evacuation," he said.

While many were evacuated from the city, which had a prewar population of more than 400,000, Ukrainian officials have estimated that nearly 100,000 people remain inside. Residents who managed to flee told of being trapped in basements with little food or water, while contacting those left behind grew difficult.

"This could be our last message," Volyna, the Ukrainian commander, said in an earlier video. "We might only have a few days or even hours remaining."

Francis reported from London and Masih from Washington. The Washington Post's Annabelle Chapman in Warsaw and Miriam Berger in Washington contributed to this report. 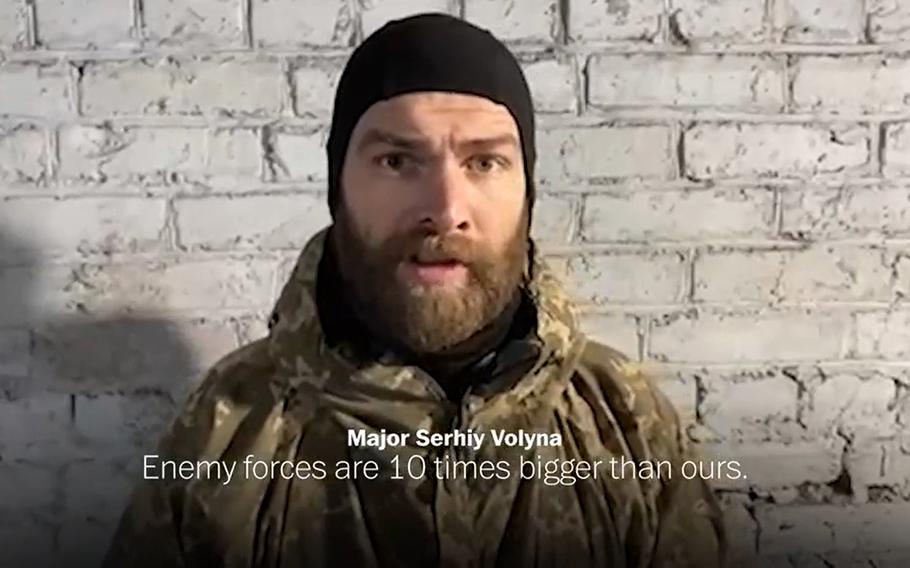