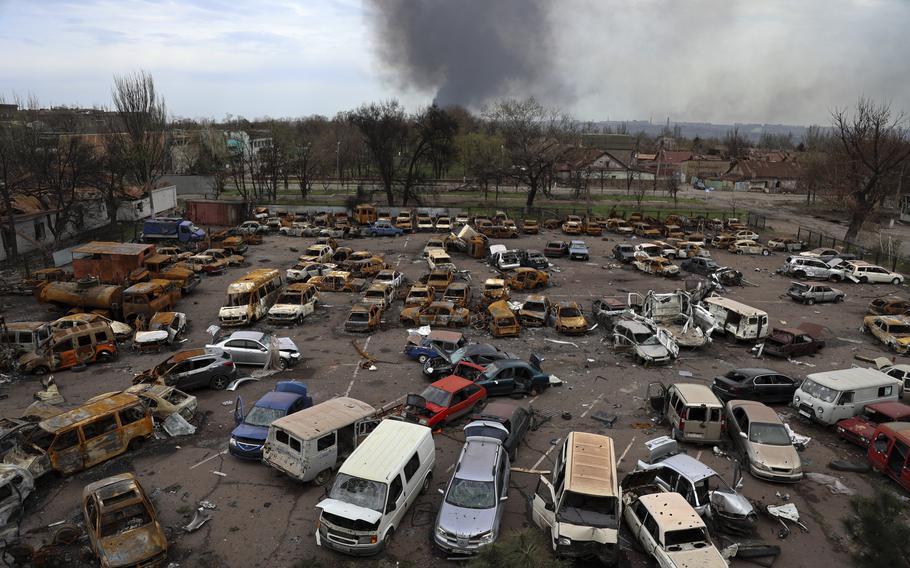 Damaged and burned vehicles are seen at a destroyed part of the Illich Iron & Steel Works Metallurgical Plant, as smoke rises from the Metallurgical Combine Azovstal during heavy fighting, in an area controlled by Russian-backed separatist forces in Mariupol, Ukraine, Monday, April 18, 2022. Mariupol, a strategic port on the Sea of Azov, has been besieged by Russian troops and forces from self-proclaimed separatist areas in eastern Ukraine for more than six weeks. (Alexei Alexandrov/AP)

Long before Mariupol's Azovstal Iron and Steel Works became a key battleground in Ukraine, it played a dominant role in the port city's economy. As one of the largest metallurgical factories in Europe, it pumped out more than 4 million tons of crude steel annually and provided livelihoods to tens of thousands of people.

But now, amid a devastating war and a weeks-long siege by Russian forces, the sprawling industrial park is no longer producing steel. Instead, the plant and its network of underground tunnels are serving as a shelter and final holdout for thousands of Ukrainian fighters, including many from the Azov Battalion, one of Ukraine's most skilled — and controversial — military units.

As many as 1,000 civilians are also hiding in the subterranean network, Mariupol's city council said Monday in a Telegram message.

Russia's Defense Ministry on Tuesday repeated its demand that Ukrainian fighters inside the facility lay down their arms, giving them a new deadline of noon local time. The deadline passed without any apparent surrender. Ukrainian officials said that Russian forces were bombing not only Azovstal but also nearby residential areas.

Azovstal was originally constructed in the early Soviet era and was later rebuilt after the Nazi occupation of Mariupol between 1941 and 1943 left it in ruins. It now occupies four square miles along the city's waterfront.

"Under the city, there is basically another city," Yan Gagin, an adviser with the pro-Moscow separatist group the Donetsk People's Republic, told Russian state news network RIA Novosti over the weekend.

Gagin complained that the site was designed to withstand bombings and blockades — and that it has an inbuilt communication system that strongly favors the defenders, even if they are far outnumbered.

Sergiy Zgurets, a Ukrainian military analyst, told Reuters that the Russians are using "heavy bombs" in the Azovstal area, given its large size and number of workshops.

Mariana Budjeryn, an expert at the Harvard Kennedy School's Belfer Center for Science and International Affairs, said the situation in Mariupol looked increasingly "hopeless," based on the information that is trickling out.

"This city got besieged slowly and the area of control under Ukrainian forces choked, as it were," said Budjeryn, who is from Ukraine. "There is probably tactical and security advantage for the defending forces to make their last stand at this large industrial facility. It's like a mini fortress."

A lot remains unknown, she said, including what kind of armaments or access to air defenses the Ukrainian forces have left.

But if Russia were to take the steelworks, it would be a much-needed victory for the Kremlin.

After failing to overrun Kyiv in the war's first days, Russian forces have regrouped in eastern Ukraine with an apparent plan to seize large parts of the Luhansk and Donetsk regions, together known as Donbas.

Mariupol, with a prewar population of about 450,000, is one of the last urban areas of Donetsk that is not fully under Russian control. Capturing it would give Russian forces a land bridge between Russia and Crimea, the peninsula it annexed from Ukraine in 2014.

Azovstal and similar sites in the city are also prime examples of why Donbas and its industrial heritage are so important for both Ukraine and Russia. Mariupol is Ukraine's second-largest port city, and before comprehensive Western sanctions, Russia had a booming steel sector that was valued as the fifth largest in the world.

Donbas is known best for its coal, but Mariupol also had a profitable metal industry. Roughly 40,000 residents were employed at Azovstal and another nearby steelworks owned by the same company, Ilyich Iron and Steel Works, according to Ukrainian steel giant Metinvest.

Together, Azovstal and Ilyich accounted for roughly one-third of Ukraine's crude steel production in 2019, according to tracking from the analyst group GMK Center. That year, steel and related industries contributed 12% of Ukraine's gross domestic product.

Russian forces stormed the smaller Ilyich plant last week. But Metinvest said in a statement to Reuters last week that it would "never operate under Russian occupation."

Taras Shevchenko, director general of Ilyich Iron and Steel Works, said Monday in an interview with the Ukraine 24 news channel that the Russian action in Mariupol was a "deliberate, systematic destruction of industry."

He said the company was assessing the extent of the damage and vowed to restore the metallurgical plants. His remarks were published on Metinvest's website.

Azovstal has seen conflict before. Production at the site began in 1933, but less than a decade later Mariupol was overrun by German troops during World War II, and works were halted amid a dramatic exodus of civilians from the city.

But by 1944, just one year after the occupation ended, work was already underway to rebuild the plant, which soon became a productive and profitable part of the Soviet steel industry.

Seventy years later, steelworkers from Azovstal organized to forcefully retake Mariupol from pro-Russian separatists in 2014. The resistance - in a city where a majority spoke Russian and had often voted for politicians friendly to Moscow - surprised many observers.

Rinat Akhmetov, Ukraine's richest man and the owner of Metinvest, has served as a member of parliament for the pro-Moscow Party of Regions. He has been accused of murky underworld dealings — accusations he has long denied — and had a supporting role when federal investigations looked at President Donald Trump's links to Moscow.

Akhmetov turned against the separatists in 2014. This year he refused to back the Russian invasion, and despite a public feud with President Volodymyr Zelensky, he has helped fund the government by making a $34 million advance tax payment.

Ukraine's steel and iron industry declined after 2014, with crude steel production from Azovstal dropping by more than 1 million tons between 2013 and 2015, according to GMK Center. But with new investment in Mariupol, there had been a positive trend for the industry in more recent years. Metinvest had plans for a $1 billion investment in its steel and iron industry sites in the area.

In mid-March, the chief executive of Azovstal said nearby fighting meant the site had been shut down for the first time since the Nazi occupation. Enver Tskitishvili, speaking in a video address from Kyiv, said the shutdown would be only temporary.

"We will return to the city, rebuild the enterprise and revive it. It will work and bring glory to Ukraine the same way it always has," Tskitishvili said. "Because Mariupol is Ukraine. Azovstal is Ukraine."

The Washington Post's Ellen Francis contributed to this report.