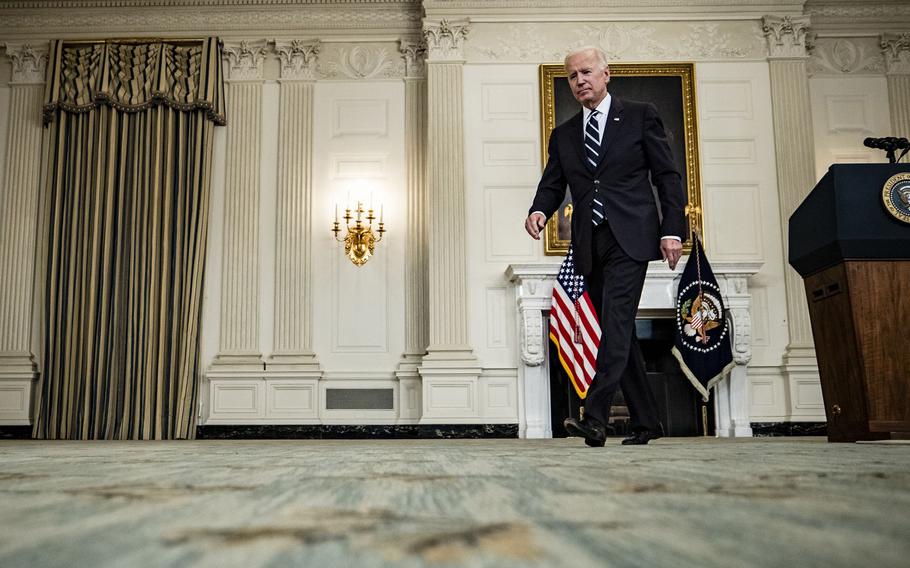 President Joe Biden departs after speaking in the State Dining Room of the White House in Washington, D.C., on Sept. 9, 2021. (Samuel Corum/Bloomberg)

The U.S. will release roughly a million barrels of oil a day from its reserves for six months beginning in May, a historic drawdown underscoring White House concern about rising gas prices and supply shortages following Russia's invasion of Ukraine.

President Joe Biden also will invoke Cold War powers to encourage domestic production of critical minerals for batteries for electric-vehicles and other uses, the White House said in a statement. Battery materials will join the list of items covered by the 1950 Defense Production Act.

The White House said that the release from the Strategic Petroleum Reserve was "unprecedented."

"This record release will provide a historic amount of supply to serve as bridge until the end of the year when domestic production ramps up," the White House statement added.

Biden will order as much as 180 million barrels released from U.S. reserves over the next several months. He'll speak about his plan at the White House at 1:30 p.m. in Washington.

Pump prices are weighing heavily on the White House's political prospects in November, when voters will decide whether Biden's party will retain control of Congress. The president has struggled to tame both gasoline prices and broader inflation, which is at 40-year highs as the global economy adjusts from pandemic disruptions.

Despite the administration's assurances last year that gasoline prices would fall in 2022, they have instead risen dramatically. The White House has blamed the increase on Russia's invasion of Ukraine, noting in its statement that gasoline prices have spiked nearly $1 a gallon since the start of the year.

"The United States is the largest oil producer in the world and is a net energy exporter," the White House said in its statement. "Despite that, the actions of a dictator half a world away can still impact American families' pocketbooks."

The administration also will push the International Energy Agency to coordinate releases from reserves by other oil-consuming nations. The organization will meet within days, two people familiar with the matter said, and the administration expects other countries will make some reserve releases but not as much as the U.S.

U.K. Business Secretary Kwasi Kwarteng is considering proposals for his nation to join the effort, according to a person familiar with the matter. The person declined to say what amounts of oil the country would release from its reserves.

But the releases won't be accompanied by greater production from OPEC+ nations, after the cartel said Thursday it'll stick to gradual increases. OPEC+, which includes Russia, ratified an existing plan to increase supply in May by 432,000 barrels a day in an online meeting, according to a statement.

The goal of Biden's plan is to create a bridge for U.S. supply until the fall, when domestic production is anticipated to increase, the White House said. In its statement, the White House criticized U.S. energy companies for not ramping up production faster.

"There are oil companies that are doing the right thing and committing to ramp up production now," the White House said. "Still, too many companies aren't doing their part and are choosing to make extraordinary profits and without making additional investment to help with supply."

OPEC+'s refusal to increase its own production may blunt any effect of the U.S. release, the largest by far in the history of the Strategic Petroleum Reserve.

Oil dropped by more than $5 a barrel in a matter of minutes following the news late Wednesday of Biden's plans. Brent crude, the international benchmark, was down 4.6% at $108.28 as of 4:02 p.m. in London.

"It is hard to overstate the scale of this intervention if it bears out," Kevin Book, managing director of ClearView Energy Partners, said in a research note. "It would be the largest draw-down volume announced in the 45-year history of the SPR by a factor of 3.6x."

OPEC+'s decision to stick with plans for a gradual supply increase was in line with expectations. Riyadh has prioritized its relationship with Moscow, which co-leads the OPEC+ alliance, and the cartel insists there's no shortage of oil in the market.

Yet U.S. gasoline prices are near record highs, even after Biden previously announced releases totaling 80 million barrels in November and March.

The administration also plans to issue waivers of a U.S. law, the Jones Act, that requires oil to be transported between American ports only by U.S.-built, -flagged and -operated vessels. That will ensure the flood of reserves are delivered in an orderly and timely manner, a senior administration official said.

The government will take waiver requests seven days a week and aims to process them within two days, the official said.

The move had been encouraged by leading oil refiners, according to two people familiar with the matter.

Biden's previous releases of oil from U.S. reserves have had a muted effect on prices -- U.S. average pump prices rose after the administration began discussing its first release last fall.

Although oil in the stockpile has been sold or exchanged roughly two dozen times, including to mitigate supply disruptions, reduce the deficit and offset federal spending, it's never been on this scale.

As of March 25, the reserve had 568 million barrels remaining, according to Energy Department data.