'I want to donate to the Ukrainian military.' Crowdfunding becomes part of Ukraine's arsenal 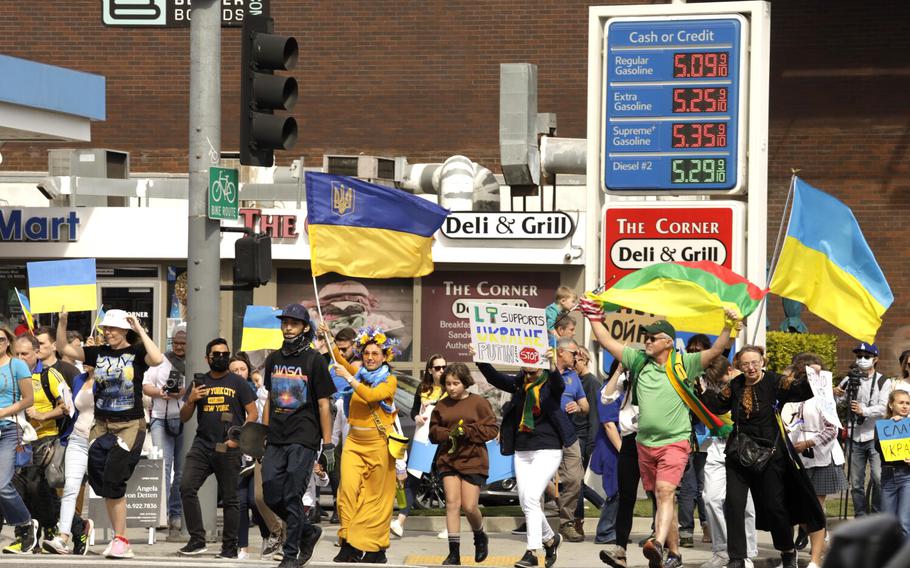 Hundreds of Ukrainian Americans and others march past a gas station featuring high prices for gas during a rally to denounce Russia’s invasion of Ukraine along Santa Monica Boulevard in Westwood, Calif., on Feb. 26, 2022. (Genaro Molina, Los Angeles Times/TNS)

(Tribune Content Agency) — It was one of the more unusual online crowdfunding efforts in recent years: When Russia invaded Ukraine in late February, many internet users and some mainstream American news outlets shared links for donating to Ukraine's outmatched military.

One of the crowdfunding supporters was Emmy Gengler, chief executive of Softjourn, whose California-based technology services company has posted information on platforms including Twitter and LinkedIn about how to donate to humanitarian efforts as well as a National Bank of Ukraine fund to help finance the Ukrainian armed forces.

Softjourn "has been supporting the Ukrainian army for the last eight years," since Russian-backed separatists took over part of eastern Ukraine and Crimea, said Gengler; company support has included medical equipment such as ambulances. Softjourn has employees on multiple continents, including about 200 employees based in Ukraine, some of whom have left the country and some of whom are staying and working through the conflict, Gengler said. Calls and meetings are sometimes interrupted by air-raid sirens. In addition to the war hitting close to home for Softjourn, "we also have to look at the bigger picture, which is that I do not believe Putin will stop with Ukraine," Gengler said.

As the U.S. government and other NATO powers send weapons to Ukraine and impose economic sanctions on Russia, many private citizens, companies and others sympathetic to Ukraine have been waging a parallel effort online to directly and indirectly contribute to the country's resistance and humanitarian efforts.

Like many global crises in the 21st century — like the recent "digital Dunkirk" to help some Afghans flee Taliban rule — a smartphone and an internet connection are sometimes all that's needed for civilians in liberal democracies to pitch in, at least within the geopolitical boundaries drawn by their own governments. The U.S. government, at least so far, has not seemed to try to restrain American citizens from providing aid to Ukraine's armed resistance.

Crowdfunding brings internet users "into the intimate proximity to the conflict," said Olga Boichak, a Ukrainian-born lecturer in digital cultures and a digital war expert at the University of Sydney in Australia, who has studied the military crowdfunding efforts that had already been underway in Ukraine since 2014. "It unsettles the boundary between the military logistics and the civilian logistics."

In the days since the Russian invasion began, cryptocurrency users have sent more than $59 million in crypto assets to the National Bank of Ukraine account for the military and to a popular Ukrainian nonprofit, Come Back Alive, that helps provide resources to frontline fighters, according to Elliptic, a crypto analytics company. The National Bank of Ukraine has reported receiving the equivalent of nearly $100,000 in donations in foreign currencies, including the U.S. dollar, euro, British pound, Canadian dollar, Chinese renminbi, Japanese yen, Swiss franc, Polish zloty, and the Australian dollar.

"I've had several folks reach out and say, 'Hey, I want to donate to the Ukrainian military," said Lindy Kyzer, director of content for ClearanceJobs.com, which Kyzer described as "the CNN of the security clearance process" to get jobs working with classified U.S. government information. "I haven't found anything that said that's illegal, but if you have an active clearance, you shouldn't be donating to a foreign military."

Kyzer said she had also been contacted by U.S. National Guard members wanting to directly sign up to fight with the Ukrainian military, which she advised against, given their official duties. "Welcome to the crowdfunded military effort," Kyzer said. "It's fueled by internet and web-savvy [people] and cryptocurrency and the ubiquitousness of the spread of information."

Longtime fears over Russian "disinformation" campaigns to mislead public opinion in other countries have also cooled as many social-media users have instead been won over by the PR offensive by Ukraine's entertainer-turned-president Volodymyr Zelenskyy, whose defiant speeches against the invasion have been retweeted tens of thousands of times on Twitter.

U.S.-based tech giants like Google and Meta have played their own role in the opinion wars by restricting access to Russian-backed media channels such as RT, which have refused to call the invasion a "war" in accordance with Kremlin policy. Platforms have also been cracking down on social media users engaged in "coordinated" deceptive posting.

Many of these efforts have often come at the explicit request of Ukrainian leaders reaching for every tool available to help fight off a vastly larger military on the physical battlefield, while also hoping to economically and politically isolate the Russian government in the international arena to make peace more appealing.

"No more @Apple product sales in Russia!" Ukrainian Vice Prime Minister Mykhailo Fedorov wrote on Twitter, in one of his many messages tagging companies and officials demanding Russian boycotts. "Now @tim_cook let's finish the job and block @AppStore access in Russia. They kill our children, now kill their access!" he implored, calling out the Apple CEO.

Not every boycott request is granted, and there are limits to how far some outsiders are able — or willing — to go in helping erect a new, digital Iron Curtain around Russia, which itself has been criminalizing media and digital content that strays from the government's tightly controlled propaganda about the scope and bloodiness of the war.

Some cryptocurrency supporters also rejected Ukrainian calls for cryptocurrency exchanges to block Russian users, arguing in part that citizens shouldn't be punished for the actions of their government. After a request from Ukraine officials to effectively kick Russian websites off the internet, the Internet Corporation for Assigned Names and Numbers, which helps manage web addresses, said it had neither the technical ability nor unilateral authority to take such steps.

"Your desire is to help users seek reliable information in alternative domain zones and prevent propaganda and disinformation," the organization's president, Göran Marby, argued in part in an otherwise sympathetic letter. "It is only through broad and unimpeded access to the Internet that citizens can receive reliable information and a diversity of viewpoints."

Some U.S. digital platforms have been squeamish about allowing crowdfunding for Ukrainian nonprofits that provide equipment to the Ukrainian military.

Patreon blocked fundraising for one of the most popular such groups, Come Back Alive, as a violation of its platform policies restricting "anything that facilitates harmful or illegal activities." (Come Back Alive had said its efforts included training "350 snipers, more than 2,000 sappers and more than 3,000 gunners, and training is being conducted to train UAV [drone] operators.") GoFundMe has blocked any fundraiser that supports "any war effort support, regardless of the country, which can include funding weapons, any supplies to soldiers, and propaganda."

A U.S. State Department spokesperson declined to specifically address Americans' donations to Ukrainian military efforts but emphasized there are many humanitarian relief efforts that can also be supported.

While the digital component of the story might be novel, there's nothing new about American civilians picking sides in foreign conflicts and wanting to help, even if their government doesn't. Direct aid from U.S. civilians for fighters has often been explicitly forbidden in other conflicts, depending on whether the U.S. government has sanctioned the combatants or designated them as terrorist groups.

"If there's been one thing I've learned, it's that supporting violence abroad is something done only in the most like tightly controlled of situations, in that the government sets the agenda, and deviating from its line to support violence abroad is done at your peril," said Wadie Said, a law professor at the University of South Carolina and a former federal public defender who has written about terrorism prosecutions in the U.S.

Martin Galvin, a New York attorney and former national publicity director of Irish Northern Aid, recalled how U.S. officials accused the group of acting as a front for the Irish Republican Army during the Troubles, which Galvin denied. (Galvin said he a saw "a lot of parallels" with the Ukrainian resistance against Russia and that he was "very sympathetic": "You're dealing with overwhelming force from someone you view as foreign occupier.") During the 1970s and '80s, U.S. officials clamped down on Americans, including Galvin, who wanted to support Irish republicans opposing British rule.

"They tried to use the Foreign [Agents] Registrations Act. They would visit people, say you're involved with a group; they tried to say we were agents of the Irish Republican Army, which we said we were not," Galvin said. "We were Americans who were concerned and wanted to help Ireland the way many people want to help Ukraine today."

Galvin expressed amazement at the ways Ukrainians and their supporters could use digital tools to rally support today compared to decades past.

When it comes to U.S. neutrality laws, Jason Blazakis, a senior research fellow at the Soufan Center and a former director of the Counterterrorism Terrorism Finance and Designations Office, at the U.S. Department of State, said he thought it seemed unlikely U.S. officials would legally crack down on pro-Ukraine crowdfunders given its own support of Zelenskyy's government.

"It's very clear that the United States has picked a side, right?" Blazakis said. "It would be hard for the U.S. to do much about it, because the U.S. is providing direct support too."