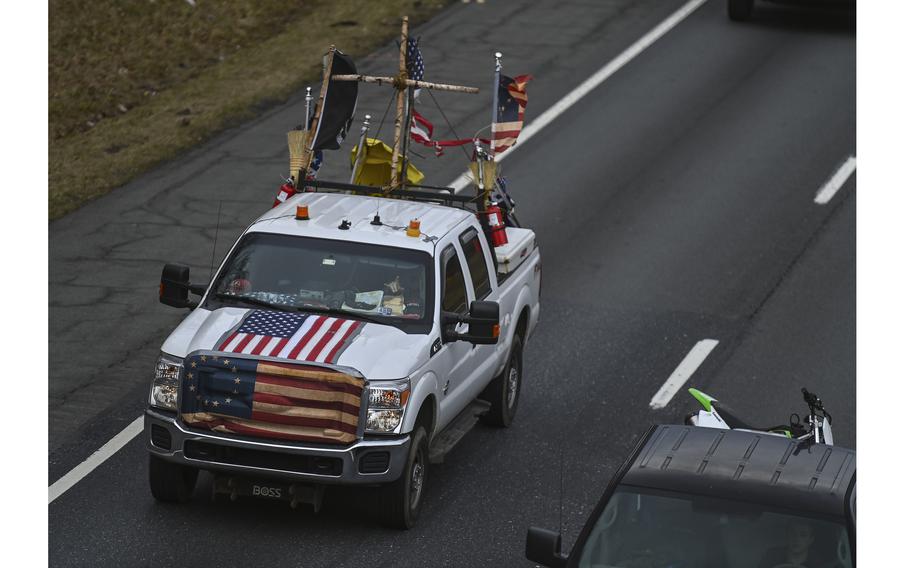 WASHINGTON — Hundreds of trucks, cars and SUVs protesting the government's response to the coronavirus pandemic circled the Capital Beltway on Monday for a second day as the group announced it secured a meeting in Washington with two senators.

Organizer Brian Brase said that the group, which began its demonstration on Sunday with two loops around the Beltway, has no plans to take the protest beyond the highway but acknowledged that there's a faction of the convoy that wants to head into the nation's capital. Authorities said traffic disruptions Monday were minimal and there were no reports of convoy-related incidents during the group's single loop of the 64-mile Beltway.

The group says it wants to hold lawmakers accountable for the government's pandemic responses, describing frustrations with workplace vaccination mandates and other measures intended to limit the spread of the coronavirus. Members of the convoy will meet Tuesday with Sens. Ron Johnson, R-Wis., and Ted Cruz, R-Texas, although it wasn't clear whether that would alter the convoy's plans for the rest of the week.

An advisory from Johnson's office indicated that the senators would meet on Capitol Hill with convoy members "to discuss the harmful effects of President [Joe] Biden's vaccine mandates."

Del. Eleanor Holmes Norton, D-D.C., said she spoke Monday with U.S. Capitol Police Chief Tom Manger, who said he wasn't expecting security threats as a result of the convoy and that traffic disruptions were minimal. Citing reports that convoy members wanted to meet with members of Congress, Norton said she hopes the group will be satisfied and go home.

"It looks like they understand that blocking traffic doesn't help their cause, whatever their cause is," Norton said. "It seems their cause has dissolved with masks coming down, and covid no longer quite the problem it has been nationwide."

Joel Valdez, a spokesman for Rep. Matt Gaetz, R-Fla., said the congressman and two other House members planned to host an invitation-only "roundtable discussion" with truckers on Tuesday, although it wasn't clear whether the group was the same as those involved in the convoy.

The "People's Convoy" rolled out of its base at Maryland's Hagerstown Speedway onto Route 40 on Monday morning, making its way from Interstates 81 to 70, then to I-270 before merging onto the Beltway. It took about 25 minutes for the convoy to pass, with several breaks in between. The convoy was made up of about 130 large trucks, as well as hundreds of smaller vehicles.

It included a teal bobtail flying American flags pulling a sign that read "Farmers and Truckers for Freedom." Hundreds of pickup trucks and cars trailed, carrying various flags with slogans including "Don't Tread On Me."

The trucks traveled at speeds between 20 and 50 mph, mostly in the right lane as they tried to stay together, while leaving enough space for other traffic to weave between trucks. Construction workers stopped in the median to wave and cheer. On almost every overpass between Hagerstown and the Beltway, people waved flags and signs. Convoy drivers honked in response.

Brase, a 37-year-old truck driver from northwest Ohio, said a Monday morning delay in returning to Washington was the result of security concerns. The group merged onto the Beltway about 12:40 p.m., hours after lengthy discussions began in Hagerstown about the day's plans.

"There were concerns about people trying to come in here who didn't belong," he told supporters, warning that those who intend to "cause harm, violence and disruption" were not welcome.

Authorities across the D.C. region have monitored the group and warned drivers about potential traffic problems.

Virginia State Police spokeswoman Corrine Geller said that the agency will continue to follow the plan it had in place over the weekend. She said there were no serious problems reported Monday.

"They're moving," she said, adding that the convoy didn't cause major traffic issues. "It's Northern Virginia, so it's bad on a good day, but we've had no complaints" from other motorists.

D.C. Police Chief Robert Contee told reporters at a Monday briefing that officials continue to monitor the convoy. While peaceful demonstrations are welcome, he said, Contee warned that "there are certain things in the District we are not going to tolerate." He did not elaborate.

Shortly after the convoy crossed the Potomac River on Monday, the parade of hundreds of big rigs, pickup trucks, motor homes, at least one charter bus and scores of cars streamed past, taking up two middle lanes and moving at normal speeds. The procession was broken into about five rolling segments, each typically led by two semis, parallel with one another, as cars and trucks trailed.

Big trucks blasted their horns and occasionally belched diesel fumes as they passed.

American flags were draped across truck grilles or shot up from door frames and pickup beds, many accompanied by the Canadian flag or the yellow Gadsden flag. Trucks carried both hand-drawn and professionally printed banners that read "Freedom Convoy 2022."

On the Lewisville Road overpass in Virginia's Fairfax County, a woman in workout attire yelled "Let's go Brandon!" as she waved to the convoy below. The phrase is code for a profane expression against Biden.

The convoy didn't appear to cause significant slowdowns for other travelers, who moved in and out of the procession.

The group plans to stay at the Hagerstown Speedway "at least" through Saturday, Brase said in an interview Sunday, adding that he hopes "this is all over by Wednesday." Crowds at the speedway have shown support for former president Donald Trump and disdain for Biden.

At times during Monday's pre-departure briefing, people cheered to show their support, shouting, "We're with you!" and calling out "Brian! Brian!" in hopes of getting his attention and answers to questions about the group's future.

He reiterated that he did not want to go into D.C. "at this time" or block the Beltway.

Brase said drivers had to meet a minimum speed of 55 mph. It was difficult to distinguish which vehicles were part of the demonstration on Sunday after the group merged with regular Beltway traffic.

The largest "People's Convoy" group left Adelanto, Calif., on Feb. 23 for a cross-country trip and arrived in Hagerstown on Friday night. Many made the 2,500-mile journey from Southern California, while others joined along the way.

"I'm hopeful that we have successful dialogue with congressmen and women and senators that help get what we're looking for pushed through in a timely fashion," Brase said in an interview Sunday. "If they don't come to the table to meet with us or they ignore us, then every day it will escalate."

Brase said Sunday the group is coordinating with law enforcement to avoid impeding traffic and acknowledged that "obviously there's a natural disturbance. We're hoping one lap by two lanes, so we get back here sooner before rush hour or anything like that."