Parents have a new headache as masks in school become optional 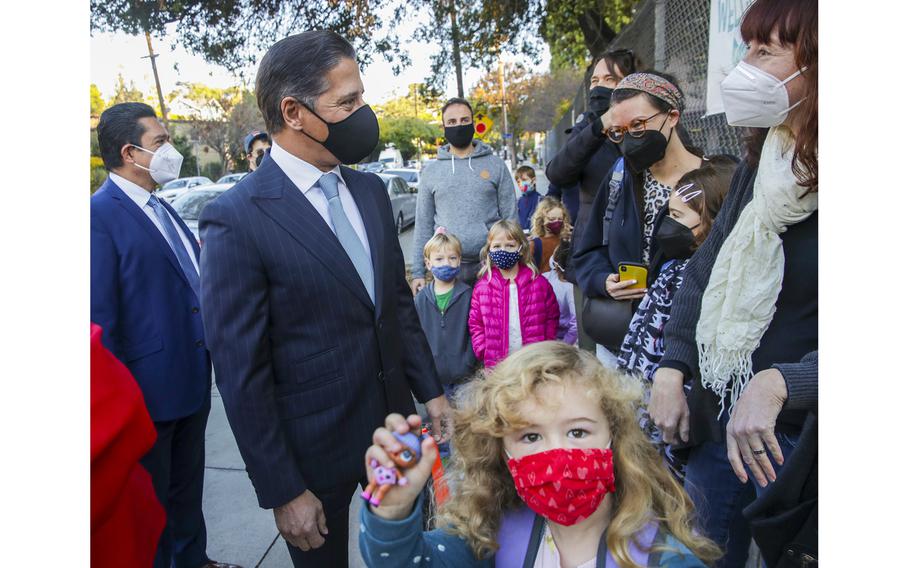 Some adults say the change is overdue, and that after years of pandemic angst, their kids yearn to see the faces of teachers and classmates. Others say mask choice opens a new arena for peer pressure and ridicule, a perennial issue, but one that’s newly serious with varying vaccination rates and shots out of reach for the youngest students.

Schoolchildren already face pressure to fit in, particularly in matters of clothing and appearance. Parents have limited ability to control their offspring outside the house — not news to anyone who has waged a battle over skirt length or green hair. Now, masks are the new headache.

Lupe Hernandez’s vaccinated 8-year-old son, Nico, caught COVID in December and faces lingering side effects. Nico, who has special needs, will remain masked when the mandate ends at his school in New York City’s Tribeca neighborhood.

Hernandez says her son already “feels different just being autistic,” and the last thing she wants is extra anxiety when he sees other students not wearing masks.

Tori Mikos, of Hampshire, Illinois, in Chicago’s exurbs, has three children in elementary school, and says they won’t be wearing masks.

“I’m thrilled that we are going to mask-optional,” she said. “This is something that myself and many parents have wanted for a really long time.”

But her children face new crosscurrents of pressure, Mikos said. “We’ve had more parents, even in the carpool, say rude comments,” she said.

Kids who persist with masking will have it worse, she said.

“The kids will tease kids that are wearing the mask,” Mikos said. “I hope that does not happen.”

More than half of the largest 500 U.S. districts now practice mask-optional policies, according to Burbio, a Pelham, New York, data company that tracks school closings. New Jersey, which enacted some of the strictest safety measures at the height of the pandemic is lifting its mandate Monday, as is New York City, the nation’s largest district.

New York City’s private Horace Mann School, with some 1,800 students in nursery through 12th grade, is telling families its Monday transition to mask-optional life will be hard.

“While the sunsetting of the mask mandate indoors and when on campus will be a relief to some, it will be a source of discomfort and even anxiety for others,” head of school Thomas Kelly said in a letter to parents.

The Austin Independent School District in Texas asked parents, students and teachers in a survey whether it was time to make masks optional, and the results so far have been perfectly split, with 6% unsure. Almost a third of respondents said the mandate should stay in place for the rest of the school year. Still, the district made masking optional effective Monday.

The policy shift mirrors relaxed guidance from the U.S. Centers for Disease Control and Prevention that rolled out in late February. Some health experts have questioned the timing, and criticized the move, because of the difficulty of reinstating mask rules in the event of another surge.

In practice, optional policies may create more friction than mandates.

“Some kids who are masking are actually teasing and or bullying the kids who are not masking, and the same is true vice versa, so it’s not just a one way thing,” said Mary Alvord, a psychologist in Montgomery County, Maryland. “It just creates a lot of angst, because now anything can go.”

The added burden comes after a prolonged period of social isolation that caused anxiety and depression among children to spike, according to several studies.

Tajh Sutton, president of her local school board in Brooklyn, is concerned about relaxing the rule. She kept her two children home without a virtual option for months during the beginning of the school year — until she started getting calls from the attendance officer.

Her children returned in November and the whole family had contracted COVID by January.

“My 8-year-old daughter told me she doesn’t want to go school if people are not going to wear masks,” Sutton said. “I don’t understand why we wouldn’t keep the masks on.”

Across the country, more than 12.6 million child COVID cases have been reported cumulatively. January saw the highest level of infection among children throughout the pandemic, though cases fell dramatically in the weeks that followed. Since the beginning of September, there have been nearly 7.6 million child cases, according to a report from the American Academy of Pediatrics.

Chicago Public Schools, the third-largest district in the U.S., expects a mask-optional policy for students and staff “in the near future,” given a drop in cases and hospitalizations, according to an emailed statement. The policy is expected to be released next week, according to CPS.

Meanwhile, the Chicago Teachers Union in a statement on its website Wednesday said it has an “agreement that will hold masking, testing and other key mitigations in place until the end of the year — mitigations that protect every school community in our city.”

Some Chicago parents are frustrated that city schools have lagged public indoor venues and other districts around Illinois in relaxing guidelines.

“All of us were going to be able to enjoy our lives mask-free for the first time in months, and our children, the least vulnerable to this disease, continue to be masked by mandate of the board,” said Nick Kryczka, a parent of third- and fifth-grade students in Chicago’s Jefferson Park neighborhood. “I would describe it as a major inconvenience at the least.”

Health experts have pushed for clearer metrics for when to relax or tighten the guidelines, and raised concern about the public’s willingness to re-mask if those benchmarks aren’t understood when cases begin to spike.

“The thing I’m worried about is the idea for people that this is done — that you can go home and burn your masks and never see them again,” said Jaimie Meyer, associate professor of medicine and public health at Yale University in New Haven, Connecticut. If a new variant emerges, “I’m afraid there won’t be the public appetite for reverting to more restrictive measures.”

Horace Mann will still require masks for its youngest students, and advised parents to keep their own feelings on the issue in check during conversations with their children.

“Masked or unmasked, at HM we treat each other with the respect, kindness and generosity of heart each of us deserves daily,” Kelly wrote.