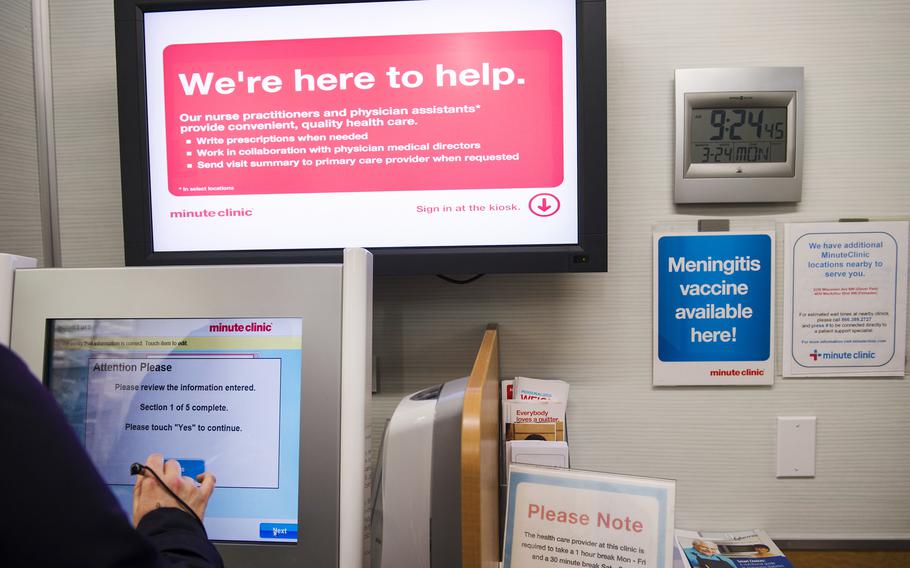 Thousands of pharmacy locations, such as CVS MinuteClinics, are expected to implement the one-stop, test and treat program beginning later this month. (Amanda Voisard/for The Washington Post)

Consumers will be able to walk into a clinic at a CVS or Walgreens, get tested for coronavirus and, if the results come back positive, go home with a free course of antiviral medicine under a new “test to treat” program announced by President Joe Biden this week as part of his new pandemic road map.

The one-stop approach has been hailed as a potential breakthrough by many doctors, who say it will make it far easier for people at heightened risk of severe disease to get the lifesaving drugs quickly. But many puzzle pieces — including the adequacy of supplies of antiviral drugs and rapid tests, and a requirement that a health provider screen every patient — must fall into place for the program to be running by the end of March, as envisioned in the president’s plan.

“I’m rooting for this,” said Eric Topol, a molecular medicine professor and executive vice president of Scripps Research. “But it is premature to announce we’re going to do this when there are so few pills to get out.”

“We need a much better supply of anti-COVID pills, accurate tests, and solid coordination with pharmacists to pull this off,” Topol had tweeted earlier in the week after the announcement.

Administration officials said in interviews that they are confident they have sufficient supplies of both the pills and test kits to launch the program in hundreds of pharmacy locations with a number of chains beginning next week. They say the antiviral drugs have already been bought by the federal government and will be provided free.

“At this point, we have enough paxlovid and molnupiravir to provide the medications,” said Tom Inglesby, senior adviser to the White House COVID response team, referring to the two antiviral drugs.

The program aims to streamline the process for people with underlying conditions to obtain either Pfizer’s paxlovid or Merck and Ridgeback Biotherapeutic’s molnupiravir, which significantly reduce the risk of hospitalization and death. In clinical trials, Pfizer’s pill was shown to be nearly 90% effective at keeping high-risk patients from developing severe illness. Merck’s drug reduced the risk of hospitalization or death by 30%.

“The overall goal of the program is to increase access to lifesaving treatments that need to be given quickly to be effective,” Inglesby said.

The one-stop approach to disseminating the pills is crucial because the medications must be taken within five days of the onset of symptoms to be effective against COVID.

“We have a therapeutic window [that] closes every day you let it go by,” said Gerald Harmon, a family medicine specialist in Georgetown County, S.C., and president of American Medical Association.

Inglesby said that by the end of March, the administration anticipates thousands of Test to Treat spots will be set up in pharmacy-based walk-in health clinics, where patients can see a licensed health provider, as well as in community health centers and long-term care facilities.

Participating providers will be listed on a website by the end of next week, so users can search to find the nearest location offering test to treat services, he said. That website, which hasn’t yet launched, will be continually updated as more pharmacy locations join.

Many doctors praised the idea of the program but worried about how it would be executed. For starters, the antiviral medications cannot be prescribed for everyone. Only people 12 or older with underlying health conditions that put them at heightened risk for severe infection are eligible for Pfizer’s pill, and only those 18 or older with underlying health conditions can receive Merck’s drug.

Both pills also have contraindications. Pfizer’s pill cannot be taken alongside several common medications, including some that treat heart conditions and control cholesterol. It is also not recommended for people with severe kidney or liver problems. Molnupiravir does not have known drug interactions, but is not recommended during pregnancy, or for those under 18 because it could affect bone and cartilage growth.

Under the Food and Drug Administration’s authorization, the pills must be prescribed only by licensed physicians, advanced practice registered nurses, and physician assistants because of the complexity of the medications. But Inglesby said the pharmacy-based clinics have licensed health care providers on-site who can screen patients for possible contraindications before prescribing the pills.

From Topol’s perspective, the biggest challenge facing the proposal will likely be the supply of antiviral pills.

After the FDA authorized the drugs in late December, both Pfizer and Merck began ramping up production, but struggled to meet demand during the peak of the omicron wave in January. Since then, doctors say the pills have become more widely available, but can still be tough to obtain because of pharmacy staffing shortages and weekend closures.

Administration officials noted that production of the pills is ramping up: Last week, the federal government distributed 148,980 courses of paxlovid and 349,776 courses of molnupiravir to the states, and hundreds of thousands of doses remain available, according to data published by the Department of Health and Human Services Office of the Assistant Secretary for Preparedness and Response.

This month, Inglesby said, 1 million additional courses of paxlovid will be sent to pharmacies, including those that will be participating in the test to treat program. In April, another 2.5 million courses of Pfizer’s drug will be shipped out. In addition, Pfizer has indicated it can deliver 10 million treatment courses of paxlovid by June.

Even as the supply of the antivirals has been increasing, the number of new daily cases in the United States has plummeted as the omicron surge wanes. Over the last week, an average of 54,609 new cases was reported each day, and only a fraction of those people would likely be eligible for the drugs.

Topol suggested that if a new variant emerged suddenly, the supply might be outstripped by demand.

“A lot of the success of this depends on the level of circulating virus,” he said. “If it is really low, then a million blister packs may be enough. But if we head into a variant or another surge, it won’t cut it.”

Meanwhile, the availability of rapid coronavirus tests, in short-supply as recently as January, has also increased in pharmacies and other stores as cases have declined. The number of tests now on the market should be sufficient to meet the needs of the test to treat program, said Wilber Lam, a physician and biomedical engineer at Emory University who runs the lab tasked by the National Institutes of Health with evaluating the rapid tests.

While details on the participating providers are still being worked out, two large pharmacy chains, CVS and Walgreens, say they are preparing to sign on, although they do not yet have firm start dates or locations.

“Our pharmacists and pharmacies ... stand ready to further support in the timely and accessible delivery of COVID-19 treatments to patients,” said Karen May, a Walgreens spokeswoman.

Topol said he hopes the program will succeed., “It’s definitely the bold type of move we need,” he added. “This is what we want to have in place to be ready for a surge.”