Ukraine invasion triggers rhetoric for both sides in US energy debate 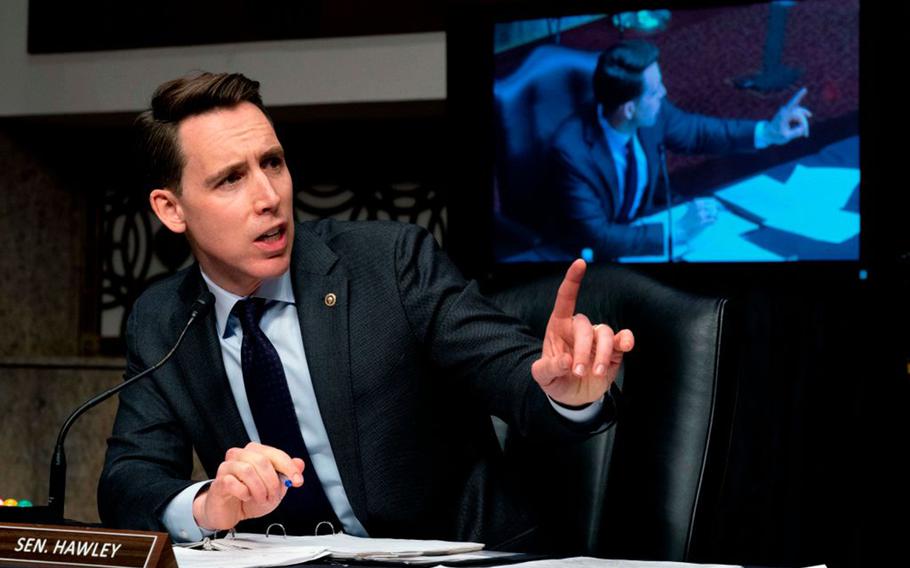 Sen. Josh Hawley, R-Mo., has introduced legislation that would weaken environmental regulation and reinstate a permit for Keystone, among other things. (Andrew Harnik, Pool/AFP via Getty Images/TNS)

WASHINGTON (Tribune News Service) — Both sides in the debate over how fast the U.S. should shift to renewable energy sources are finding ammunition in Russia’s invasion of Ukraine.

Republicans and fossil fuel defenders who believe the U.S. should continue to aggressively drill for oil and natural gas say plentiful American supplies could provide Europe with an energy lifeline if the flow of natural gas from Russia is disrupted.

“What’s happening in Russia and Europe is a stark reminder of the need to support American energy development, not hinder it,” Sen. Steve Daines, R-Mont., said in a statement urging revival of the abandoned Keystone XL pipeline.

Democrats and clean energy advocates say the supply of natural gas from Russia would not be an issue if the world used more solar, wind and other renewable power sources.

“Europe needs to wean itself off of its addiction to Russian gas,” Paul Bledsoe, strategic adviser to the Progressive Policy Institute, said in an interview.

“It funds the malign Kremlin activities,” he said. “Russia gets at least a third of its overall government revenue from oil and gas exports.”

Daines is among dozens of Republicans to press the administration to revive Keystone, though the Canadian company behind that project, TC Energy, abandoned it after President Joe Biden revoked its permit.

Sen. Josh Hawley, R-Mo., introduced legislation Monday that would, among other steps, weaken environmental regulation, reinstate a permit for Keystone and lower a metric known as the “social cost of carbon,” which federal agencies use in considering climate rules, to $0.

“My bill will reverse Joe Biden’s disastrous energy surrender that has allowed Russian energy dominance and instead open up American production full-throttle,” Hawley said. “To stand up to aggressors like Vladimir Putin, we can and we must work to power our nation and the world.”

Asked last week if the president would consider lifting restrictions on the energy sector or reconsider a permit for Keystone, White House press secretary Jen Psaki said, “The Keystone Pipeline is not flowing, so I’m not sure how that would solve anything.”

“There’s also plenty of oil leases that are not being tapped into by oil companies, so you should talk to them about that and why,” Psaki said.

Psaki said Biden has been talking with major oil-producing countries to ensure supplies are available. She declined to predict if the president would consider ordering U.S. companies to stop importing Russian oil.

Heather Reams, president of Citizens for Responsible Energy Solutions, a right-leaning energy group, said that after stressing the importance of energy independence for national security reasons, Republicans can cite the invasion as a “cautionary tale” about the need to balance emissions reductions with other considerations.

Democrats risk being out of touch with the moment if they promote the notion of a total switch from oil and gas to solar, wind and other renewables, she said.

“We don’t have the baseload power for that,” Reams said, referencing electric utilities’ need for fast-starting power plants that can meet demand surges. “It’s not to say we can’t work towards that, but it’s not a realistic option right now.”

Reams called the canceled Keystone pipeline a lost opportunity and said the administration should cut through bureaucratic steps to allow energy projects of all types to advance.

As of mid-February, all seven export terminals in the U.S. were full of tankers, blocking more outbound deliveries of LNG. The U.S. became the top supplier to Europe of LNG in January, ahead of Qatar, Russia, Nigeria and Algeria, according to the Energy Information Administration.

As oil and gas companies and Republicans pushed to weaken environmental rules in the last week, Democrats pushed to decouple from Russia’s energy supplies.

“Through his actions, President Putin has provided the world with an overwhelming incentive to move away from Russian gas and to other forms of energy,” Biden said Feb. 23, before Russia invaded.

Environmentalist and author Bill McKibben urged Biden to invoke the Defense Production Act and direct manufacturers to churn out heat pumps, units that run on electricity rather than fossil fuels, and ship them to Europe.

“Russia is an autocratic petro-state using oil and gas money to finance military aggression,” Manish Bapna, CEO of the Natural Resources Defense Council, said in a statement. “It is weaponizing energy exports to hold Europe hostage to a price and supply crisis of Moscow’s making.”

Following Germany’s move last week to halt the Nord Stream 2 pipeline, meant to carry gas from the St. Petersburg area, under the Baltic Sea to Germany, the European Union is expected to announce a climate plan this week to limit its reliance on Russian gas.

Russia supplies about 40% of Europe’s gas. Roughly 60% of all the goods and services Russia sells abroad relate to fossil energy.

In a report published in December by the Progressive Policy Institute, Bledsoe pressed the EU to adopt regulations that lower methane, the highly potent greenhouse gas that comprises the majority of natural gas. “Russia is the largest methane emitter in the world by far,” Bledsoe said, citing International Energy Agency research. “The lines are leaky.”

Nodding toward the international backlash against Russia and moves in Europe toward renewables and away from methane leakage, he said, “I think this is the beginning of a global revolution in gas to make it far cleaner.” He added, “Countries are going to require gas to lower methane emissions.”

Republicans and Democrats could reach common ground in Congress to export more LNG to help allies in Europe withdraw from Russia’s energy supply and ramp up domestic renewable energy production, he said. “That’s the bipartisan deal to be had.”

The U.S. became the top producer of oil and gas during the Trump administration and has held that position since, EIA data show.

“Oil and gas deposits are only found in certain countries. So those countries, like Russia and Saudi Arabia, quickly realize that they can get away with murder — sometimes quite literally,” Stinnett said by phone.

Just as the collapse in 2021 of Texas’ electrical grid triggered debate about electrical stability, Russia’s invasion may spark a reckoning over ties between fossil energy and geopolitical power, Stinnett said.