US companies shed 301,000 jobs in January as omicron surged 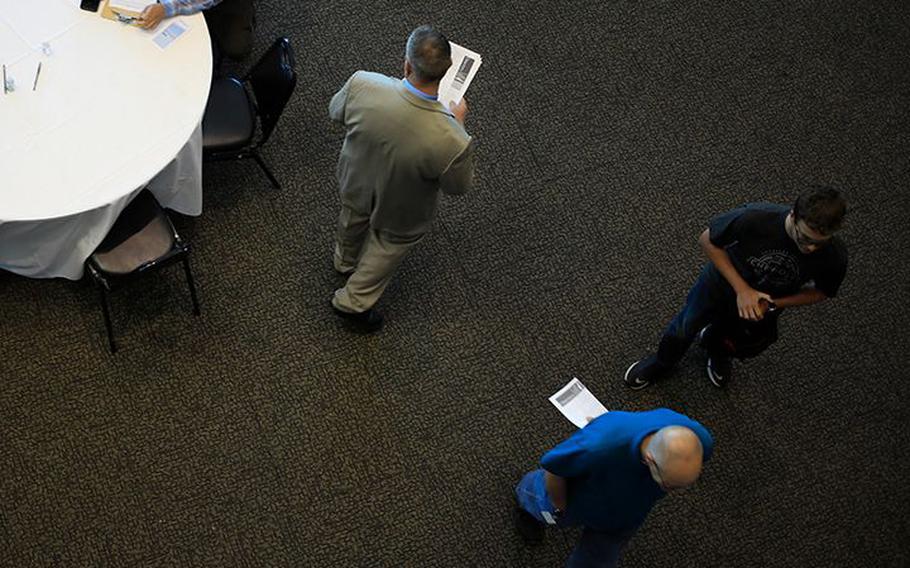 Private payrolls fell by 301,000 in January as surging coronavirus cases weighed on the labor job market, according to data released Wednesday by Automatic Data Processing.

It was the first time the payrolls processing firm has reported negative job growth since December 2020 and marks the biggest decrease since spring 2020.

The federal government will offer its own snapshot on Friday, when it releases January jobs data. Though ADP's estimates often differ from those of the government, the pronounced drop in Wednesday's report ― flipping from a gain of 807,000 jobs in one month, to a loss of 300,000 the next ― could reset expectations for the Labor Department's findings.

Kathy Jones, chief fixed income strategist for Charles Schwab, said the ADP report may be a precursor to a weak jobs report on Friday.

"The one thing to note is that all sectors are negative and the last time that happened was in April 2020," Jones tweeted.

There were ample signs that hiring had slowed leading into the new year.

More than 4 million people quit their jobs in December, according to federal data released Tuesday, and more than 8 million people missed work because they were sick or caring for someone who was sick from late December through early January. About 247,000 Americans have been applying for unemployment insurance each week, according to the Labor Department, a significant uptick from November when the number of weekly claims dropped below 200,000.

One major reason for this is the rapid spread of the omicron variant, which picked up enormous velocity in December, shutting many businesses, schools, and day-care centers and disrupting life for many Americans. The spread of this coronavirus variant appears to have peaked but it is still leading to more than 2,000 deaths per day.

The viral surge caused an estimated 8.8 million people to skip work because they were sick or caring for someone who was, according to Census Bureau. Those numbers were the highest since the agency started collecting that data in April 2020.

The bulk of the job losses came in the service-providing sector, which shed 274,000 positions. Within that sector, 62,000 positions were lost at companies related to trade transportation and utilities, while leisure and hospitality payrolls declined by 154,000. Small businesses were hit harder than medium- and large-size employers, accounting for nearly half of the total losses.

Still, analysts advised caution in terms of interpreting a single economic report. Mike Loewengart, managing director for investment strategy at Morgan Stanley's E*Trade, said he thought the loss would be temporary, as it was driven so heavily by the service sector. Major retailers, for example, tend to shed jobs after the holidays.

"Amid a slew of strong earnings coming in, I wouldn't be surprised if this was shrugged off," Loewengart said in an email.

A number of forces have put pressure on the labor market, particularly in the past year. After more than 20 million people lost their jobs in March and April of 2020, companies have struggled to fill openings. This gave workers more leverage to demand better pay and benefits, which has led many to quit and seek different opportunities.

Some 4.3 million people quit or changed jobs in December, down from November's all-time high but still close to record levels, the Labor Department reported. Employers had 10.9 million job openings in December.

While labor shortages vexed businesses throughout 2021, there are indications the omicron variant worsened matters in some industries. In early January, United Airlines was forced to cut flights as about 3,000 workers called in sick from covid. Walmart closed some stores in January so it could sanitize them, while Macy's trimmed store hours.

This worker leverage, though, has been disrupted multiple times by spikes in coronavirus cases, which have hit thousands of businesses - particularly hospitality and service companies - and forced them to make sudden changes.

As cases surged, employers struggled to deal with sudden outbreaks at work, and they had few of the safety net protections that cushioned the blow of previous waves. The subsidized Paycheck Protection Program loans that bolstered small business employment throughout 2020 are no longer available, with other industry-specific bailout programs drawing to a close.