Forced to flee his Afghanistan homeland, refugee finds peace in Philly — on his skateboard 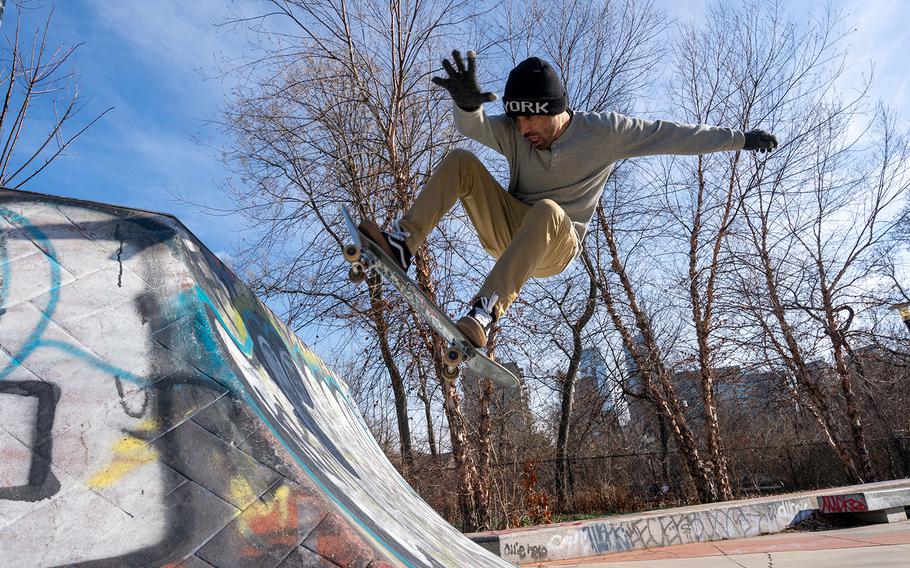 Merza Mohammadi, who was evacuated from Afghanistan amid the Taliban takeover in August, flashes across a quarter pipe at Paine’s Park in Philadelphia on Jan. 14, 2022. (Thomas Hengge, The Philadelphia Inquirer/TNS)

PHILADELPHIA (Tribune News Service) — When Merza Mohammadi flashes across Paine’s Park on his skateboard, the anguish of fleeing Afghanistan seems far away.

It’s atop a speeding, 31-inch strip of Canadian maple that he finds peace, the one place in this new and strange American land where he feels fully comfortable, soothed by the familiar grinding song of plastic wheels on concrete surface.

It would be inaccurate to say that Mohammadi is famous. But he is known, probably the best-known skater in Afghanistan. Or at least he was, until his evacuation amid the Taliban takeover flung him 11,000 miles to a house in South Philadelphia, into a life where everything is different.

In Kabul, he worked for Skateistan, a prominent international NGO, teaching skateboarding to thousands of children, “all the children in Afghanistan, the poor children,” Mohammadi said. He became the focus of a documentary and book about the organization’s efforts to provide sports and educational opportunities to traumatized boys and girls.

And in escaping the country — Taliban control made him and everyone connected to the Western powers a potential target — he left behind everything and everyone.

His mother is still in Afghanistan. And his siblings. And his fianceé. He was the only one with a job, the provider for a family of 10.

What came with him to the United States was the ability to maneuver a skateboard as if it was attached to the soles of his feet. 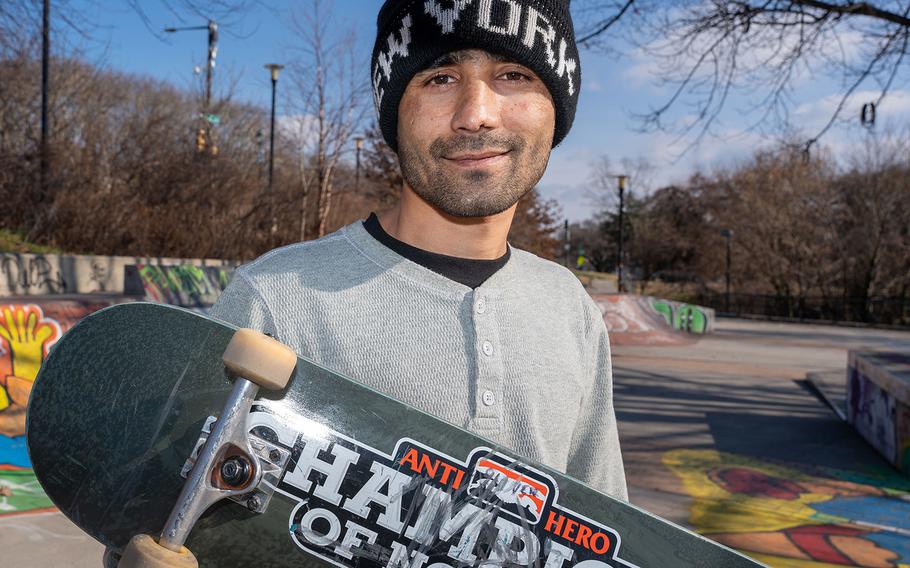 Merza Mohammadi at Paine’s Park in Philadelphia on Jan. 14, 2022. His love of skateboarding traveled with him from Afghanistan to Philadelphia. (Thomas Hengge, The Philadelphia Inquirer/TNS)

Recently Mohammadi, 26, sped up and down and across the rounded quarter pipes of Paine’s Park, leaping onto and off of ledges as if he were weightless.

Not that every landing was perfect.

“One more!” he called out, laughing, as he retrieved his board after a fall.

Skateistan suspended the programs it ran in three Afghan cities amid the mass evacuation that saw the United States airlift 120,000 people to safety. Two-thirds of the staff left the country.

As Taliban fighters came into the capital, Mohammadi headed to the Kabul airport, wading into the huge crowds outside, not sure if he could get through. A Skateistan colleague already had made it inside, though, and she spoke to the American soldiers at the gate.

Mohammadi held up a sign that said “Skateistan,” so they could see him in the masses.

The soldiers waved Mohammadi forward. He showed them his identification card, proof of employment, letters of recommendation, everything he had.

“They said, ‘You’re working with Skateistan?’” Mohammadi recalled. “‘OK, you can go to the U.S.’”

He landed at a first-stop evacuation center in Germany, then flew on to a U.S. government “safe haven” at Fort Bliss in Texas, which at peak housed about 10,000 Afghans in temporary quarters.

As of this month about 21,400 evacuees remain on five U.S. military bases, including 9,800 at Joint Base McGuire-Dix-Lakehurst in South Jersey, as they await resettlement in communities across the nation.

Mohammadi came with the clothes on his back — and a connection to an old Skateistan colleague who lived in Philadelphia.

Brandon Gomez, a lifelong skateboarder originally from Coatesville, had just bought a house in the Grays Ferry section, near the Grays Ferry Skatepark. Once in the U.S., Mohammadi reached out, and Gomez welcomed his friend to come live with him.

Mohammadi’s room in the refurbished 1925 rowhouse is comfortable but spare, the only personal touches being an Afghanistan flag that hangs on a wall, along with the deck of a Skateistan skateboard in the national colors.

South Philadelphia is a long way from the Mekroyan Fountain, a Soviet-era artifact in the center of Kabul. It’s where Australian Oliver Percovich founded Skateistan in 2008, offering Afghan children a safe, fun activity to help build their confidence and encourage their learning.

Mohammadi was a teenager when he first saw people moving across the ground on wheels.

In an interview with Skateistan’s founder, he described how he didn’t know what he was looking at. And his friends didn’t know either.

“Roller-skating,” they told him.

At the time Mohammadi was working washing cars. When first he stepped onto a board, he fell on his back. His family — and his boss — told him he was wasting his time.

But every day after work, he said, he went to the fountain to practice, learning to keep his balance and becoming more comfortable on the board. After about a year, he became an official Skateistan volunteer.

And when Skateistan started a formal Skate School, they offered him a paying job as a skate educator.

It was life-changing. Until then, Mohammadi said in the interview, he was “a simple and ordinary person,” someone who followed the crowd.

Now students called him “teacher.” The way they looked at him offered a new way of looking at himself.

Soon he got involved in helping to build Skateistan skateparks.

“Merza loves teaching skateboarding to others, especially those that come from a disadvantaged background,” said Skateistan founder Percovich, now in Berlin, describing his former employee as “a really kind, thoughtful, and generous human being.”

The journey to America has not changed that.

“He’s encouraging of me, telling me, ‘Thank you, you did a great job, I know how many people you’re working with,’” said Taj Sheikh, Mohammadi’s resettlement caseworker at HIAS Pennsylvania. “He’s happy to be here, but really worried about his family back home.”

The evacuation that propelled Mohammadi out of his country and away from his family also happened to land him in a big skateboarding city.

Philadelphia was long known across the East Coast for the iconic lines and lanes of LOVE Park, now off-limits to skaters. More recently it’s gained attention for Paine’s Park on the banks of the Schuylkill and for the concrete paradise of FDR Skatepark, located under an Interstate 95 overpass.

Dozens of pocket parks dot the metropolitan landscape. Even on cold days, skateboarders rumble across the apron of the Municipal Services Building near City Hall.

Last week, after more than an hour of traversing Paine’s Park, exertion that left him sweating in the winter sun, Mohammadi paused to consider the gains and losses of surrendering his homeland.

“I’m alive,” he said. That’s the main thing. Others are not. And many, including people he loves, are trapped in a country where safety is uncertain and starvation looms.

Mohammadi said he needs to bring his family to the United States, but doesn’t know when or how that might happen. The odds are long. He’s learning English, though in day-to-day life the language barrier can be exhausting.

Gomez, 35, organized a GoFundMe campaign that raised $10,000 to help his friend get settled and started in Philadelphia. Mohammadi has received his Social Security number and work authorization. And he has a job offer — with Gomez, who works for California Skateparks, a company that designs and builds skateboarding venues across the world from its base near Los Angeles.

Mohammadi isn’t sure what he wants to do. Only that whatever is next, skateboarding will be his companion in a country where, at least for now, connections can be too few.