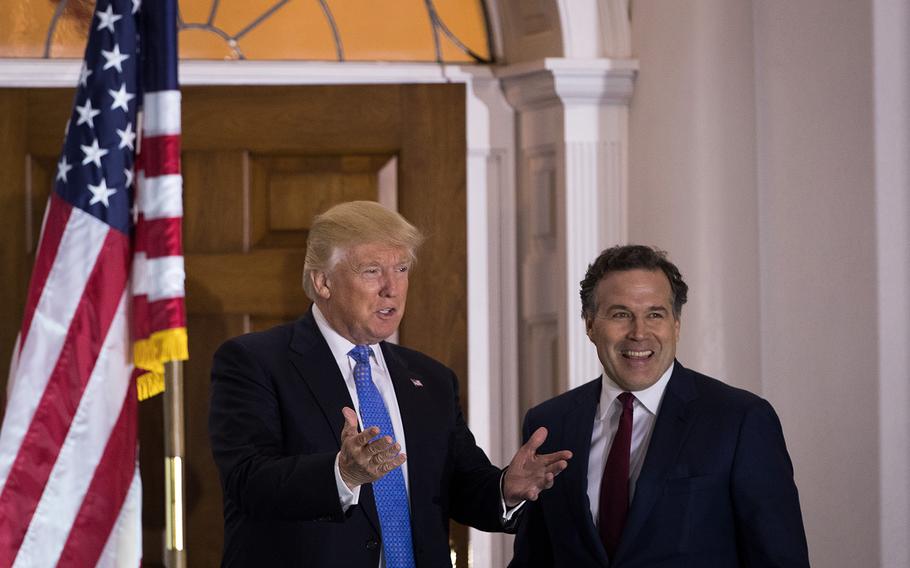 From left to right: President-elect Donald Trump and David McCormick, president of the management committee at Bridgewater Associates, pose for a photo before their meeting at Trump International Golf Club, Nov. 20, 2016, in Bedminster Township, N.J. (Drew Angerer, Getty Images/TNS)

David McCormick, a hedge fund manager and Army veteran, officially launched his long-expected campaign Thursday morning, joining a crowded and free-spending field in one of the country's most critical Senate races.

McCormick, who grew up in Pennsylvania but most recently lived in Connecticut, for weeks has made clear that he intended to run, airing more than $2 million of television ads since late December, meeting with GOP insiders across the state and buying a home in the Pittsburgh area.

His entry, after months of public maneuvering, likely rounds out the Republican field in a swing state contest that could help decide control of the Senate and, with it, the fate of much of President Joe Biden's agenda.

The primary could help set the Republican Party's direction in the wake of the Trump presidency.

McCormick comes to the fray with a sparkling resume that fits the traditional Republican mold, support from some notable GOP figures and an apparent willingness to spend millions of his own fortune. But he also faces questions about whether a hedge fund leader with establishment support can appeal to today's Republican primary voters. He's untested politically, having never run for public office or faced the scrutiny that entails.

Supporters point to McCormick's background, with ties to the military, business world and Pennsylvania. He grew up in Bloomsburg, in central Pennsylvania — where his father was chancellor of the Pennsylvania State System of Higher Education — and went to West Point, became an Army Ranger and earned a Bronze Star while serving in the first Gulf War. McCormick then earned a doctorate from Princeton University, led a business in Pittsburgh and served in several roles in the George W. Bush administration before becoming chief executive of Bridgewater Associates, the world's largest hedge fund.

He left that job this month, but his leadership of a firm that has invested heavily in China is already drawing attacks.

A super PAC supporting Oz greeted McCormick this week with an ad hammering Bridgewater's investments in China and job losses McCormick oversaw in the Pittsburgh area. The spot featured a red Chinese flag and a narrator warning: "He's a friend of China, with a long record of selling us out."

McCormick's team says he has been critical of China in the past, pointing to a CNBC opinion piece he coauthored in June calling the country "the most serious economic and military rival in a generation." That was one of only two sentences referring to China, however, in a larger piece outlining ways that states could use funds included in Biden's coronavirus relief bill, one that passed with only Democratic support.

One of McCormick's first official campaign ads attempts to ground the wealthy executive as a down-to-earth Pennsylvanian, showing him in a camouflage jacket as he carries a hay bale in one shot and talks about hunting in another. It enlists two high school friends, wearing camo hats and sitting at a bar, to playfully mock McCormick's hunting and high school football exploits. "Dave McCormick's Pennsylvania roots will keep him grounded," the ad says.

In a second spot, he talks about wrestling at West Point and vows "to fight the woke mob hijacking America's future."

Some Pennsylvania Republicans lined up behind McCormick before he even began his campaign, including national committeewoman Christine Toretti, former GOP state chairman Rob Gleason and Bucks County businessman Pat Deon. Longtime operative David Urban has advised McCormick, as has Jim Schultz, an attorney in the Trump White House.

Oz, by contrast, has campaigned as a celebrity outsider, much as Trump did. Sands, appointed by Trump as ambassador, is aiming to show that she is the most devoted to his ideology. Bartos has relied on his long-standing ties to GOP politics in Pennsylvania, banking on grassroots support to counter what he calls political "tourists," while Bochetto dismisses his rivals arriving from out of state as "pretenders." Barnette has also sought to appeal to fervent Trump supporters.

Oz has already spent more on television than McCormick, while Sands has also been advertising and brings her own personal wealth to the race.

Sands and Oz also only recently relocated to Pennsylvania. Oz, who went to the University of Pennsylvania for medical and business school but has lived in North Jersey for decades, says he began renting his in-laws' home in Montgomery County in late 2020, about a year before he launched his campaign. Sands, who grew up in the Harrisburg area, long lived in Southern California before registering to vote in Pennsylvania again in January 2020, before Toomey announced his plans to leave office. She moved there after her time as ambassador ended, according to her campaign.

The entry of another multimillionaire foreshadows a hugely expensive primary, one upended in November when veteran Sean Parnell, Trump's first pick in the race, dropped out amid domestic abuse accusations. That collapse helped open the door for McCormick.