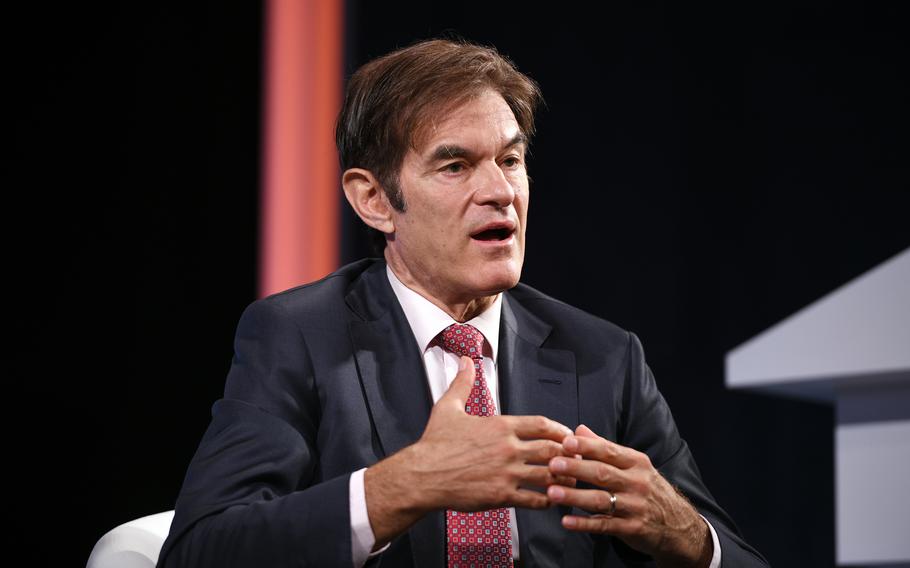 In this photo from September, Dr. Mehmet Oz speaks onstage during the 2021 Concordia Annual Summit at the Sheraton New York in New York City. (Riccardo Savi/Getty Images for Concordia Summit/TNS)

PHILADELPHIA — Dr. Oz is in.

Celebrity doctor Mehmet Oz launched his campaign for U.S. Senate in Pennsylvania on Tuesday, bringing a splash of TV star power, wealth and status as a political outsider to the Republican primary — much like former President Donald Trump once did. But he’s also likely to face questions about his ties to Pennsylvania, commitment to conservative beliefs and his at times controversial on-screen medical advice.

Most immediately, Oz’s entry jolted one of the country’s most critical campaigns, adding a nationally known figure who rose to fame with appearances on Oprah Winfrey’s daytime show.

In a one-minute launch video, Oz touted his medical background while taking aim at frustrations with the fight against the coronavirus pandemic, echoing conservative anger at restrictions that many in Pennsylvania have chafed against.

“COVID has shown us that our system is broken,” Oz said in the video released by his campaign. “We lost too many lives, too many jobs and too many opportunities because Washington, D.C., got it wrong. It took away our freedom without making us safer and tried to kill our spirit and our dignity.”

He ended with a Trumpian flourish.

“Pennsylvania needs a conservative who will put America first, one who can reignite our divine spark, bravely fight for freedom and tell it like it is,” Oz said.

Oz, a longtime New Jersey resident who grew up in Wilmington, Delaware, and earned his medical and business degrees at the University of Pennsylvania, joins an unsettled Republican primary that appears wide open. Both parties see Pennsylvania’s Senate race as vital to control of the chamber, but the GOP has struggled to find a stand-out candidate to try to replace Sen. Pat Toomey, a Republican who isn’t seeking reelection.

Oz’s announcement comes a week after the perceived GOP front-runner, Sean Parnell dropped out of the contest after facing abuse accusations from his estranged wife. Parnell, a decorated Army veteran, had been endorsed by former President Donald Trump.

He has hired a team of political veterans that include the agency that created Trump’s television ads, and others who have worked for the GOP’s Senate campaign arm and high profile Republicans in Congress, including House Minority Leader Kevin McCarthy, R., Calif. He was scheduled to appear on Sean Hannity’s Fox News show Tuesday night to discuss his candidacy.

A graduate of Harvard University and, in 1986, Penn’s medical school and Wharton business school, Oz for years has lived in a New Jersey mansion overlooking Manhattan, but he registered to vote late last year in Montgomery County, at his in-laws’ home in Bryn Athyn. His campaign site lists that town as his home. He could bring not only his own personal wealth to the contest, but potentially that of his wife’s family, which founded the Asplundh Tree Expert Co. based in Willow Grove. The international company has 33,000 employees in the U.S., Canada, Australia and New Zealand.

Despite his own lofty degrees and wealth, Oz’s campaign web site bristles with frustration at “elites” who he says misled the country during the pandemic.

“COVID-19 became an excuse for government and elite thinkers who controlled the means of communication, especially social media and our major news agencies, to suspend debate,” Oz writes, saying that “dissenting opinions” were “canceled and ridiculed.”

“The American public was patronized and misled instead of empowered. We were told to docilely lock down and let those in charge take care of the rest,” Oz wrote. “The arrogant, closed-minded people in charge closed our schools, shut down our businesses and took away our freedom.”

Oz has been praised as an accomplished cardiothoracic surgeon — he practices at New York-Presbyterian Hospital and is director of the Integrative Medicine Center at Columbia University’s Irving Medical Center. He has touted the effectiveness of vaccines in fighting the coronavirus pandemic — a position at odds with some GOP primary voters.

And he won multiple Emmy awards for his daytime talk show (awards mentioned alongside his extensive medical credentials on his official page at Columbia).

But he’s also been long criticized for promoting questionable diet pills and other medical advice that other doctors have blasted as inaccurate and unscientific.

Last year Oz promoted the anti-Malaria drug hydroxychloroquine as a way to treat the coronavirus, reportedly catching Trump’s attention in his TV appearances, despite serious questions about its effectiveness.

In 2015 a group of 10 doctors publicly questioned his appointment at Columbia, writing that Oz “has repeatedly shown disdain for science and for evidence-based medicine” and “has manifested an egregious lack of integrity by promoting quack treatments and cures in the interest of personal financial gain.”

(Among the signatories was Stanford University radiologist Scott Atlas, who would later go on to become Trump’s controversial coronavirus adviser).

In response to the letter, Oz released a statement saying, “I bring the public information that will help them on their path to be their best selves,” adding, “We provide multiple points of view, including mine, which is offered without conflict of interest. That doesn’t sit well with certain agendas which distort the facts.”

Grilled by a Senate panel in 2014 about supposedly “miracle” diet pills he touted, Oz told lawmakers then, “My job on the show is to be a cheerleader for the audience.”

Oz’s rise has been marked by TV charm, medical talent, a string of accomplishments and the power of Oprah. He played on Harvard’s football and water polo teams and was class chairman at Penn.

He spent part of his childhood in Turkey, where his parents are from, and has maintained dual citizenship. He’s aiming to become the first Muslim to serve in the U.S. Senate.

To do so he’ll have to first navigate a primary in which some of his party’s prominent figures have been suspicious, or outright hostile, toward Muslims. Operatives working for Senate opponents have already pointed to the fact that Oz at one point served in the Turkish Army and, according to photos tweeted by the Turkish Embassy, has met with the country’s strongman leader, Recep Tayyip Erdogan.

“The great thing about America is that you can hold on to whatever heritage you come from,” Oz told SJ Magazine, based in South Jersey, in 2011. “We celebrate the different cultures, so I had the privilege, as the son of immigrant parents, to grow up American while staying deeply in touch with my Turkish roots.”

He told the magazine that serving in the military was compulsory for maintaining his dual citizenship.

Oz was active in the early 2000s in local Republican politics in Bergen County, where he has lived in North Jersey, donating to the local GOP there as well as to national figures. He gave $25,000 to the Republican National Committee in 2004, $6,500 to John McCain’s 2008 presidential campaign and an affiliated entity and $2,000 to the Bush-Cheney reelection campaign in 2004.

Earlier he had also given smaller amounts to Democrats, including $1,000 to then-Sen. John Kerry, D-Mass., and $250 to the political committee led by then-U.S. Rep. Charlie Rangel of New York, both in 2001. In a 2007 profile in the Observer Oz cited Arnold Schwarzenegger, the actor-turned governor of California, as a potential political role model, and praised Theodore Roosevelt as “the ideal Republican.”

A political group supporting GOP rival Jeff Bartos pointed to Oz’s donations to some Democrats and longtime residency in New Jersey in blasting his candidacy.

“There’s carpetbagging then there is this guy trying to buy a U.S. Senate seat in a state he doesn’t live in, doesn’t know, and can’t fight for effectively,” said a spokesman for the Super PAC, Jobs for Our Future. “Oz doesn’t know the first thing about conservative Pennsylvania values and primary voters are about to find out how out of touch he is.”

Oz is the second — but perhaps not the last — major GOP candidate to enter the race despite only recently establishing or re-establishing residency in the state, while also bringing sizable wealth to bear.

Carla Sands, Trump’s former ambassador to Denmark, moved back to the Harrisburg area, where she grew up, after years living in Southern California, and has committed at least $3 million of her own money to the race. Some Pennsylvania Republicans are also courting David McCormick, head of the world’s largest hedge fund. He lives in Connecticut, though he grew up in Bloomsburg and previously led a business in Pittsburgh.

Other Republicans in the race include Bartos, a real estate developer who has also committed some of his own money to the contest, and conservative commentator Kathy Barnette. Both live in Montgomery County, where Oz is now registered.