On Jan. 6 anniversary, Biden calls out Trump for ‘spreading a web of lies’ about 2020 election 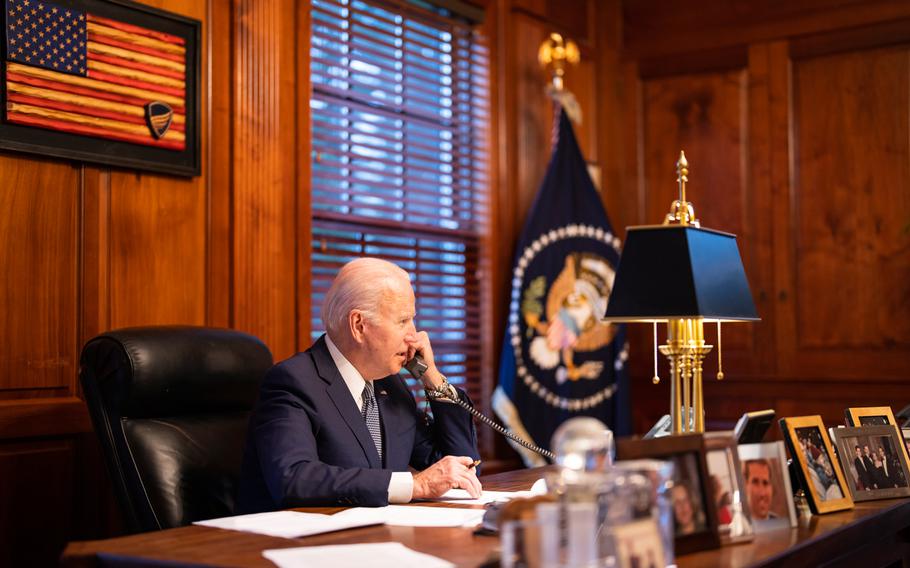 President Joe Biden on Thursday decried the violent mob of President Donald Trump’s supporters who breached the Capitol a year ago, saying that “democracy was attacked” and urging Americans to make sure such an attack “never, never happens again.” Biden took direct aim at Trump, who he said could not accept that he lost and “created and spread a web of lies about the 2020 election.” (Adam Schultz/AP)

WASHINGTON - President Joe Biden on Thursday decried the violent mob of President Donald Trump’s supporters who breached the Capitol a year ago, saying that “democracy was attacked” and urging Americans to make sure such an attack “never, never happens again.” Biden took direct aim at Trump, who he said could not accept that he lost and “created and spread a web of lies about the 2020 election.”

In a searing speech, Biden marked the first anniversary of the insurrection at the U.S. Capitol by painting in vivid detail the violence of that day - and, without naming Trump, by squarely blaming the former president for spreading “a web of lies” about the 2020 election.

“One year ago today, in this sacred place, democracy was attacked, simply attacked,” Biden said. “The will of the people was under assault. The Constitution, our Constitution, faced the gravest of threats.”

Throughout the speech, Biden did not mention Trump by name but constantly referred to him as the former president.

“For the first time in our history, a president had not just lost an election: He tried to prevent the peaceful transfer of power as a violent mob breached the Capitol,” Biden said. “But they failed.”

“Here is the truth: The former president of the United States of America has created and spread a web of lies about the 2020 election,” Biden said. “He’s done so because he values power over principle . . . because he sees his own interest as more important than his country’s interest and America’s interest, and because his bruised ego matters more to him than our democracy or our Constitution. He can’t accept he lost.”

Earlier, Vice President Kamala Harris warned that American democracy is under attack. The Jan. 6 riot, she said, showed “what our nation would look like if the forces who seek to dismantle our democracy are successful.”

“What the extremists who roamed these halls targeted was not only the lives of elected leaders, what they sought to degrade and destroy was not only a building,” Harris said. “What they were assaulting were the institutions, the values, the ideals that generations of Americans have marched, picketed and shed blood to establish and defend.”

“We cannot let our future be decided by those bent on silencing our voices, overturning our votes and peddling lies and misinformation by some radical faction that may be newly resurgent, but whose roots run old and deep,” she added.

Harris tied the attack to stalled voting rights legislation in the Senate.

“We must pass voting rights bills that are now before the Senate, and the American people must also do something more,” she urged. “We cannot sit on the sidelines.”

Harris wondered how Jan. 6 will be remembered in the future.

“Will it be remembered as a moment that accelerated the unraveling of the oldest, greatest democracy in the world? Or a moment when we decided to secure and strengthen our democracy for generations to come?” she asked.

Meanwhile, Sen. Mitt Romney, R-Utah, warned in a statement Thursday that “we ignore the lessons of January 6 at our own peril.”

“Democracy is fragile; it cannot survive without leaders of integrity and character who care more about the strength of our Republic than winning the next election,” Romney said in the statement, which did not mention Trump by name. “I said last year that the best way we can show respect for voters who are upset is by telling them the truth. The responsibility that elected officials have in this regard is fundamental to reversing the malaise gripping our current politics and ensuring that our democracy endures.”

Romney was among the seven Republican senators who voted, along with all 50 Democrats, to convict Trump in his impeachment trial last year on a charge of inciting the insurrection. The 57 votes fell short of the two-thirds threshold needed for a conviction, and Trump was acquitted.

“The American spirit is being tested,” she said. “The answer to whether we will meet that test resides where it always has resided in our country, with you, the people.”

Democratic House leaders have planned a full day of commemorative activities, including testimonials from lawmakers, commentary from historians and a prayer vigil. Senate Democrats plan to deliver floor speeches about the day. Republican leaders do not plan to participate. The Jan. 6, 2021, insurrection resulted in five deaths and injured about 140 members of law enforcement.

Trump had planned to hold a news conference to mark the first anniversary of the attack on the Capitol but announced this week that he was canceling it.