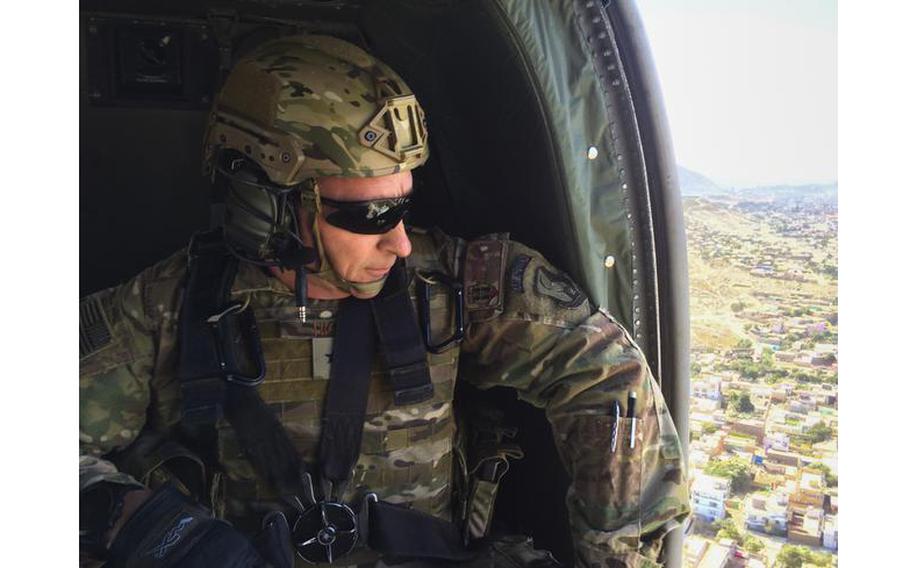 Retired Brig. Gen. David W. Hicks is shown during service in Afghanistan in this September 2016 photo. Hicks is CEO of Operation Sacred Promise, an organization that works with Afghan Air Force and Army Special Mission Wing members and their families by supporting their transition from Afghanistan and helping them start new lives in the United States. (Contributed photo)

LAS VEGAS (Tribune News Service) — David Hicks is on a mission: Help Afghan air force and army troops and their families get out of the Taliban-controlled country and start new lives in the United States.

As the chaotic withdrawal of American forces and allies from Afghanistan occurred this summer, Hicks, a Las Vegas resident, felt compelled to help.

Hicks is a retired Air Force brigadier general who flew missions in the Middle East and helped train Afghan forces that fought the Taliban. He was determined to make sure his former Afghan colleagues were not left behind.

And the group’s mission does not stop once people are out of Afghanistan. It aids refugees in securing a pathway to legal residence in the United States, as well as coordinating housing, job and education opportunities.

“It was complete chaos at that time,” Hicks said of the withdrawal. “We rapidly realized there was no plan to try to get any of the air force members out of Afghanistan, so we went to work.”

They and their families should be a priority for evacuation from Afghanistan or for U.S. visas if they are awaiting entry in places like Germany, Qatar and the United Arab Emirates, Hicks said.

The Department of Homeland Security last month said more than 25,000 Afghan refugees in the U.S. have left relocation camps to settle permanently, many with the help of relocation groups like Operation Sacred Promise.

Another 45,000 evacuees are at temporary sites in Virginia, New Mexico, New Jersey and Wisconsin. Others are overseas and awaiting entry into the United States, including an Afghan air force pilot working with Operation Sacred Promise.

The pilot is among some 9,000 refugees waiting in Abu Dhabi. The pilot, who for safety reasons is not being identified, said they graduated in 2016 from the United States Army Aviation Center of Excellence at Fort Rucker, Ala.

While anticipating a U.S. visa, the pilot stays in touch with their mother, sisters and brothers in Afghanistan through the messaging apps WhatsApp or Signal. The pilot said they want to be able to support their family economically and help other Afghan families escape the Taliban.

A Las Vegas taxi driver who came to the U.S. from Kabul in 2019 with their immediate family is also worried about relatives in Afghanistan.

The driver, who also is not being named for safety reasons, wires their family $200 to $300 a month, a lifeline they hope will sustain them while they await U.S. visas.

“Life is difficult because I have to support my family here too,” said the driver, who works 12-hour shifts seven days a week. “I’m happy that I am alive, and happy that I am here so I can help my family and my brother.”

“They will lose family, and they will lose friends,” she said of the refugees. “That’s uncontrollable now, and I have to wonder how much of that could have been avoided if we had done this another way.”

Benny, a 26-year-old Afghan refugee, was at resettlement camps in New Jersey and Texas before moving to Las Vegas in October.

He lives with Ellen and Scott Hoffman, the parents of Air Force Capt. Christopher Hoffman, who was part of the flight crew on his plane out of Afghanistan.

A former interpreter for the U.S. military, Benny utilized the African Community Center in Las Vegas, a branch of the Ethiopian Community Development Council, to apply for work authorization and complete the process to reside with the Hoffmans.

Since 2003, the center has assisted refugees by helping them get housing and jobs, Director Milan Devetak said.

“If they can donate even $1, it’s going to be a lot of the money to help those families to build their new life in the United States,” he said. “That is one of my requests because now I’m experiencing a very good life.”