When there is a military death, this California woman honors the fallen 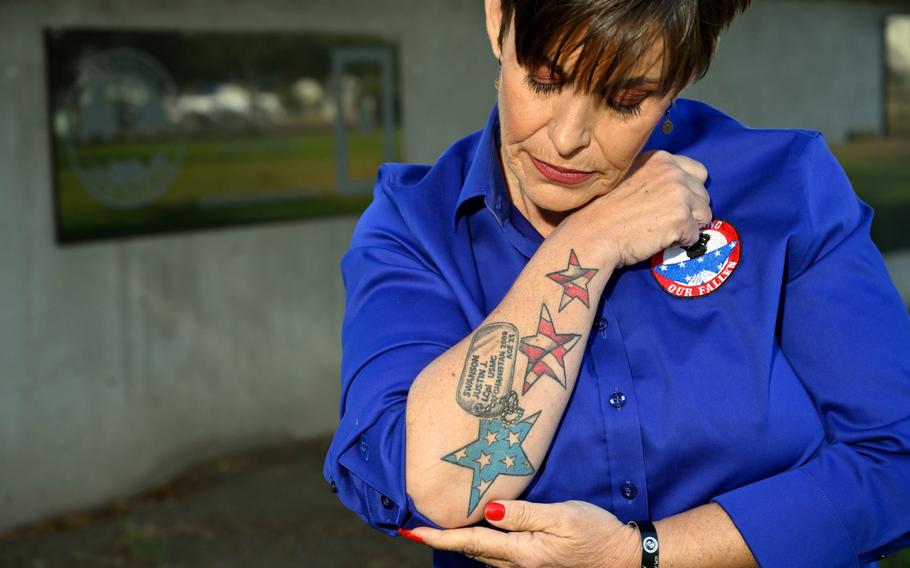 Laura Herzog, founder of Honor Our Fallen, shows her tattoo for Justin Swanson, at the memorial wall in Rosie the Riveter Park in Long Beach, Calif., on Dec. 15, 2021. Swanson’s family was the first helped by Herzog’s organization. Since 2011, she has helped more than 1,000 families who have lost a service member loved one in combat, a training accident or suicide. (Jeff Gritchen, Orange County Register, SCNG/TNS)

(Tribune News Service) — At midnight, Laura Herzog got a text.

The group of Marines she was with wanted to go to Waffle House. In advance of a fallen Marine sergeant’s funeral, she and the Marines from the base in Twentynine Palms had traveled to Florida and were staying at a hotel in Tampa.

They ordered food and joked around a bit, but mainly they spoke about their friend.

Herzog listened. She offered advice and compassion and counseled the group on what to expect at the funeral the next day.

“It’s been very emotional,” Herzog said, reached by phone that night. “We laughed, we cried. I sat up with them. They open up to me and I’m honored to be here for them.”

For 12 years, Herzog, 49, of Garden Grove, Calif., has been there when a military service member has died, offering support and assistance to those left behind. She calls them “hero missions.”

She founded Honor Our Fallen, which aids both Gold Star families and the military casualty assistance officers assigned when there has been a death. That includes helping with transportation, working with local police and fire departments to coordinate procession routes and connecting with funeral homes and cemeteries to ensure service members are treated honorably. She also ensures the public knows about the procession to line the streets in tribute and Patriot Guard escorts are in place.

In some cases, such as Herzog’s recent trip to Florida, it includes accompanying the casket aboard a commercial flight and assisting the Marine escorts whose job is to safeguard the service member.

In all, Herzog said she’s served 1,000 families. And, it doesn’t matter if the service member died in combat, a civilian accident, a training accident or by suicide, she’s there for each family.

In May, when Wallace Gregory Mitchell, a seaman first class in the U.S. Navy, finally returned home after almost 80 years, Herzog made sure he received the recognition a fallen hero deserves. Through advancements in DNA technology, Mitchell had finally been identified among the dead of the USS Oklahoma following the attack on Pearl Harbor and his family in south Orange County was laying him to rest. Herzog arranged for law enforcement and firefighters to salute Mitchell from overpasses on the route from John Wayne Airport to a Laguna Hills mortuary and for an honor motorcade to accompany him.

Earlier this year, when 13 Americans died while providing security at the Kabul airport as U.S. forces withdrew from Afghanistan, 10 of those came from a Camp Pendleton battalion, including three who were raised in Southern California. Herzog helped arrange processions and was there for the grieving, including their commanding officer.

Just 12 months earlier, she worked with Marine casualty officers and families when nine men died after their amphibious assault vehicle sank during a training exercise off San Clemente Island. Three of the Marines came from Southern California.

First Sgt. Anthony Charette served as a casualty officer for the family of Cpl. Ceasar Villanueva, of Riverside. Casualty officers notify families of the death of their loved one and help with mortuary affairs and funeral honors, along with military benefits and entitlements.

“She is nothing short of amazing,” Charette said of Herzog. “Her experience and expertise turned tasks into amazing results.”

When the remains of the nine men were recovered from the sunken AAV and taken to Dover Air Force Base, Herzog helped with the logistics in returning the California boys home.

“We are grateful for all that she has done for us when our beloved son passed away last July 30,” said Evelyn Baltierra of Corona, mother of Pfc. Bryan Baltierra, 18. “Her dedication and commitment to help ease our pain and be by our side when our son’s casket arrived from Dover is greatly appreciated. She has used her life in a way that blesses so many others.”

Herzog said she recognized a gap in what the military provided through its casualty officers and what was needed by the families following a death. Before starting her group, she was a public affairs officer for the Joint Forces Training Base in Los Alamitos but lost her job during cutbacks.

Herzog said that the casualty officers sometimes come from out of state and may not be familiar with getting around Southern California or have the necessary civilian contacts.

“When I started Honoring Our Fallen, I knew I found what God wanted me to do,” Herzog said. “I bring calm to their chaos.”

Herzog said she formulates her process as she sees the need. She knows when to reach out, when to step back, when to console and when to be blunt.

In the case of the 20-something-year-old Marines she traveled to Florida with, she resorted to her own experience as a mother and grandmother. She has four children and three grandchildren.

“I explain I’ve been doing this a long time,” she said. “I salt and pepper and do it slow and steady. They end up calling me Mama Bear. I’m not their boss or family. I’m their safeguard.”

Herzog admits the constant grief takes its toll and she talks with a therapist for her own self care. But she doesn’t consider her efforts — often coming back-to-back — a sacrifice, especially in the wake of the sacrifices the families and service members she serves have made.

And, her family helps make her work easy because they embrace what she does.

“I get asked at least once a day, sometimes even more, ‘How do you do this,’” she said. “I don’t do it. God does it. I just show up. I do what I can to support them on the darkest day of their lives. I do what I hope they’d do for me.”

On the recent Florida trip, that help included letting the Marines play spades in her hotel room and watching a UFC fight with them and getting them to journal stories about their friend, Marine Sgt. Anthony Muhlstadt, 23.

“I don’t think a lot of people would have been able to be there for those types of guys,” Lance Cpl. Devyn Dockery said. Muhlstadt, a machine gunner, was Dockery’s vehicle commander; both were stationed at Twentynine Palms. “I feel like I could call her tomorrow at 1 a.m. and talk, and I just met her last week.”

Herzog made the tragedy bearable for the eight Marines who flew to Florida to make sure their brother made it home safely, he said.

“Everything leads up to the funeral and the honors,” Herzog said. “They had to stay hard and strong. Same thing with the families.”

“Talk about a blessing!” Mort said. “She was making sure they were following procedure and that everything went the way it was supposed to go. She handled all the details, and she loved on me. It allowed me to grieve without worrying about all the other people.”

“She has a tattoo on her foot that says Mama Bear,” Mort added. “Wow, if that’s not the truth.”

But Herzog’s assistance reaches beyond the immediate family and friends.

Capt. Geoff Ball, the commanding officer of the company of Marines from the 2nd Battalion/1st Marine Regiment killed in Kabul, met Herzog while attending funerals of his fallen Marines in Southern California — she was a shoulder even he could lean on as he navigated through the devastating loss and met with the families.

“There’s this woman with all this compassion and energy,” Ball said. “She isn’t about talking but doing. She underpromises and overachieves. She is like the fairy godmother of the company.”

“What you see is what you get, and what you get is a lot,” he added. “It’s just this endless compassion. When you see people like that, it’s very inspiring.”

Herzog also sets up retreats for Gold Star mothers and wives and said she plans to expand her charity across all 50 states.

Aleta Bath, whose son, Pfc. Evan Bath was killed in the AAV sinking, hadn’t meet Herzog until she went to Catalina in March on one of the retreats.

Among the activities that weekend was parasailing. At first, Bath said, it was difficult, but Herzog helped her through it.

“To stand there with angel wings on my back and hold the flag over the same ocean Evan died in was so hard, but she didn’t let me back out of it,” Bath said.

Bath said she was in a boat with two other mothers whose sons had died in different ways, but who understood the symbolism.

“When I got down, one of the mothers just held me,” she said. “She didn’t say a word and held on tight.”

Because of the retreat, Bath said she now has a community of support from others who understand.

“She purposefully put different people together because she wants to build a community for you,” Bath said. “It doesn’t matter how your child died; if it was by suicide, an accident, or a training accident, we’re all the same because it was military.”

“Her heart is bigger than she is; I don’t know how it fits inside her body,” Bath said. “There is truly no one like her.”