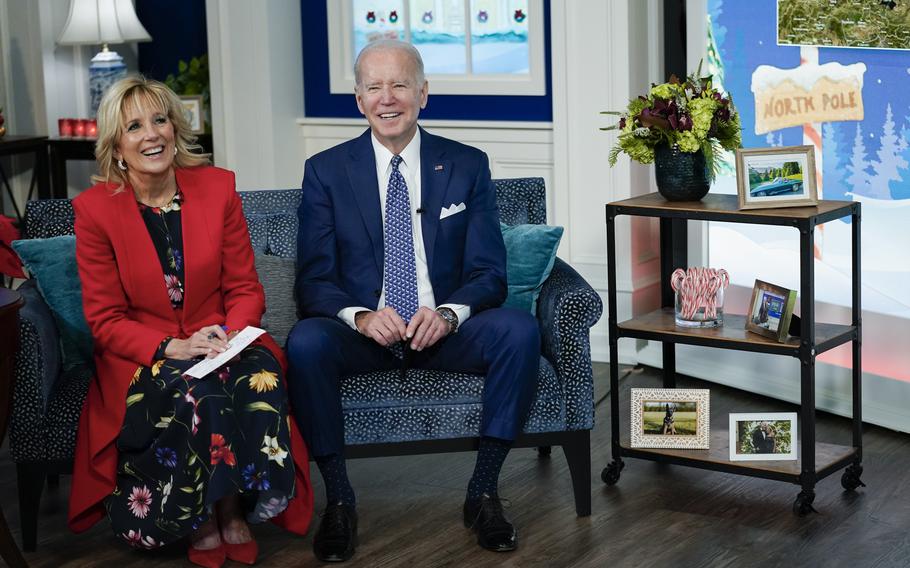 The commander-in-chief was ambushed during a feel-good holiday event with children when an Oregon parent participating remotely interjected “Let’s go Brandon,” a phrase that is code for an expletive aimed at the president.

Biden affably agreed with the parent, possibly reflecting that he does not know what the phrase means.

The moment quickly went viral as right-wing supporters of former President Donald Trump suggested Biden’s reaction shows he is too old to be president.

Biden supporters called the president’s remark a brushoff of the gibe that reflects his old-school classiness.

During the event, the first couple heard from the commander of the U.S. military’s NORAD tracking system, who told them Kris Kringle and the reindeer were already zooming through the sky somewhere over Central Asia.

Biden chatted with children about Christmas in person, warning them to make sure to be in bed on time so Santa could deliver their presents.

There was no hint at the nastiness to come as the president chatted with the four children. They told him they were hoping to get a piano, Nintendo gadgets and a Barbie doll, among other gifts.

Jill Biden joked that she still has her childhood “now ancient Barbie” doll.

The Oregon father and his children participated in the event via phone.

The president was wrapping up the call by reminding the children to be in bed by 9 p.m. when the father, identified only as Jared, spoke out.

“I hope you have a wonderful Christmas,” Biden told the man.

“Yeah, I hope you guys have a wonderful Christmas as well. Merry Christmas and let’s go Brandon,” he said.

After Biden agreed, the audio abruptly cut off and the Bidens moved on to talk with other families.

The president, who has battled low polling numbers in recent months, whipped out his cell phone to show one boy a picture of the first family’s new puppy, Commander.

Both Bidens read from a children’s book called “Olaf’s Night Before Christmas,” from the “Frozen” story.

“You’re bringing us some joy,” the president said to the kids.