If you’re trying to track Santa Claus, NORAD is ready to help 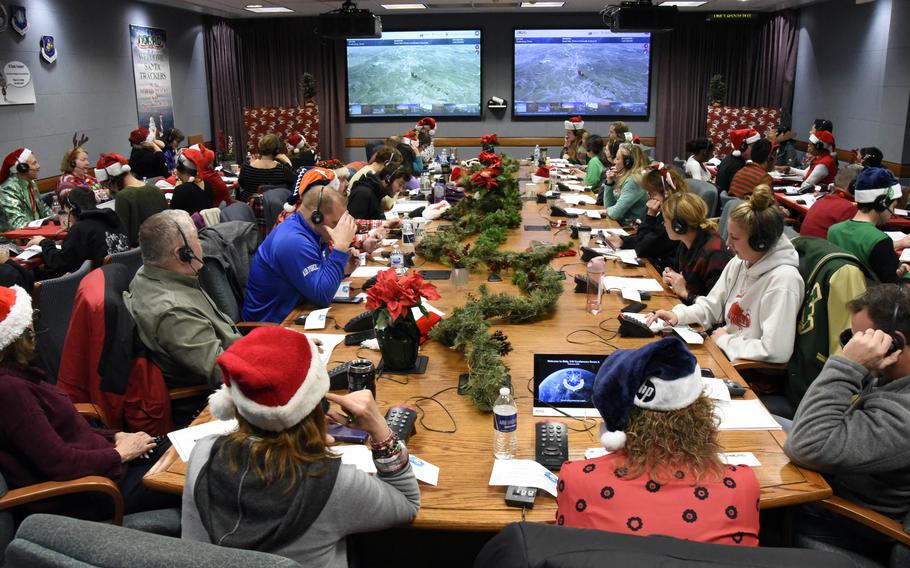 The NORAD Tracks Santa Operation Center on Peterson Air Force Base, Colo., Dec. 24, 2019, the last Christmas before the coronavirus pandemic. NORAD has been tracking Santa since 1955, when a young child dialed the unlisted phone number of the Continental Air Defense Command Operations Center, believing she was calling Santa Claus after seeing a promotion in a local newspaper. (Alexandra M. Longfellow/U.S. Air Force)

COLORADO (Tribune News Service) — The coronavirus pandemic changed many things across the world over the last two years, but it hasn’t stopped Santa Claus, his reindeer, or the mission of the North American Aerospace Defense Command — NORAD — in tracking the jolly one’s worldwide journey on Christmas Eve.

NORAD will track Santa’s travels using infrared cameras and satellites — as well as some glow from Rudolph’s nose — for the 66th year, beginning in the early hours Friday.

“So, while there are many things that have changed in the past two years because of COVID measures, there are still some things that never will ... the joy and excitement of the season and the hope and excitement for what the new year will bring,” said Charles Marsh of NORAD.

When asked whether Santa was vaccinated, Marsh explained Santa has been doing his Christmas Eve delivery for “centuries,” has seen pandemics and plagues come and go, yet continues to thrive.

“We believe Santa has somehow achieved immunity and while we don’t believe he has to wear a mask, he still believes in safety and therefore does wear one when he’s unable to socially distance or is in people’s homes,” Marsh said. “When flying in his sleigh, and more than six feet away from anyone else, we believe he enjoys the fresh, brisk air.”

The reindeer are family for Santa, but still animals and so are not mandated to wear masks, Marsh said.

“They, too, however, are socially distanced when flying and remain with the sleigh when Santa is making his deliveries so they have no contact with anyone throughout the night,” he said.

Starting at 4 a.m. Friday, visitors to the website — www.noradsanta.org — can see updates as Santa makes preparations for his flight. At 6 a.m., trackers worldwide can call to inquire as to Santa’s whereabouts by calling toll-free 1-877-Hi-NORAD (1-877-446-6723), according to a NORAD release.

Due to COVID concerns, the NORAD Tracks Santa Operations Center will have fewer phone operators — but more than last year — so callers who do not reach a volunteer will hear a regularly updated recording as to Santa’s current location, NORAD said.

The defense of Canada and the United States is the top priority of NORAD, a binational U.S. and Canadian command charged with aerospace and maritime warning and aerospace control of North America as well as monitoring aerospace activity globally, the release notes.

But every year during the Christmas season, NORAD assumes the supplementary mission of tracking Santa as he travels around the world.

The tradition began by accident in 1955 when a local newspaper advertisement informed children they could call Santa directly — but the contact number was misprinted.

Instead of reaching Santa, the phone rang through to the crew commander on duty, U.S. Air Force Col. Harry Shoup, at the Continental Air Defense Command Operations Center, the predecessor to NORAD.

Shoup was quick to realize a mistake had been made and assured the child he was Santa, according to NORAD. Shoup then assigned a duty officer to continue answering calls. A tradition was born, and continued when NORAD was formed in 1958. Each year since, NORAD has reported Santa’s location on Dec. 24 to millions of children and families.

A spokesman has explained the satellites used to track Santa have infrared sensors that can see heat — and so Rudolph’s nose is easily spotted.

The website tells visitors about all kinds of options for tracking Santa through technology, as well as games.

Each year, the NORAD Tracks Santa Website receives nearly nine million unique visitors from more than 200 countries and territories around the world.

NORAD officials have said some of the answers to popular questions asked during call-ins are: Santa’s sleigh is propelled by nine-reindeer power; the fuel is hay, oats and carrots; and its maximum speed is “faster than starlight.” And the sleigh weighs 75,000 gumdrops.

One of the most common questions is, “How can Santa travel the globe in one night?”

The answer to that, a NORAD spokesman has said, is that Santa experiences time differently than we do. So our day may be a week or month to him.

“We always want to say a big thank you to everyone who has volunteered their time to make this happen. Without the men and women from the U.S. and Canadian militaries, the family members, and the companies that donate their time and expertise, this tradition would not continue,” Marsh said.

He also thanked the families around the world who call in, check in on social media, or just track Santa for “allowing us to be a part of their traditions,” Marsh said.

“I personally have answered calls where grandparents, parents and grandchildren have all been on the same call and have all tracked Santa with us throughout the years and it’s always refreshing to hear how the children and adults are equally excited about calling in,” he said.