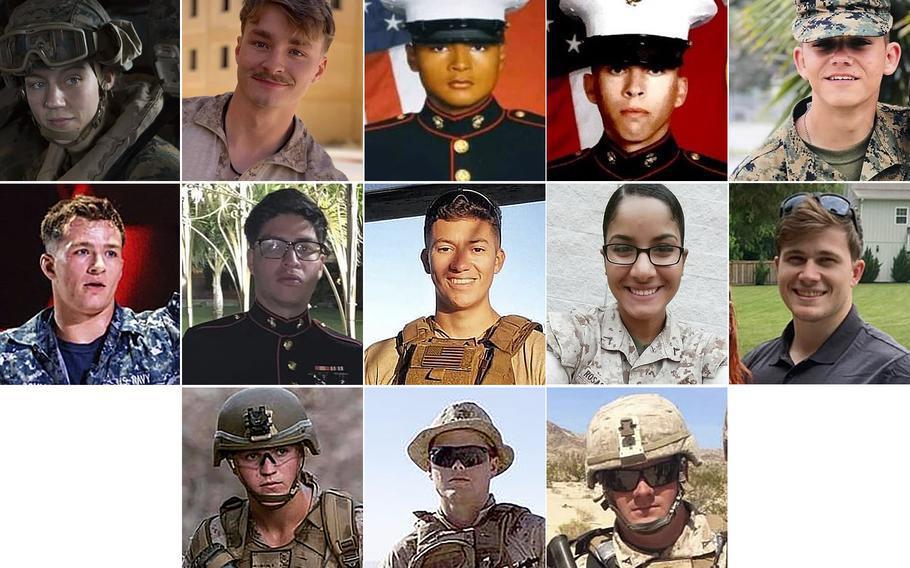 The 13 U.S. service members killed in a bombing at Kabul’s airport as they worked to evacuate thousands of Americans, Afghans and allies ahead of the U.S. military withdrawal from Afghanistan will receive the highest honor from Congress, the White House said Thursday.

President Joe Biden signed into law a bill awarding the Congressional Gold Medal to the sailor, soldier and 11 Marines killed Aug. 26 from an Islamic State suicide blast at Hamid Karzai International Airport, the White House announced. The bill was passed in the House in October and in the Senate last month without opposition in either chamber.

In a brief statement marking his approval of the bill, Biden thanked Rep. Lisa McClain, R-Mich., for introducing the bill Aug. 31, just hours after the final American ground troops left Afghanistan after some two decades of war. Biden also thanked Sens. Steve Daines, R-Mont., and Elizabeth Warren, D-Mass., for their leadership in assuring the fallen service members were awarded the medal.

“Today’s a great day!” McClain wrote in a Facebook post after Biden signed the bill. “I'm glad to see these brave men and women honored and remembered in a bipartisan fashion.”

The 13 perished in a massive suicide attack near one of the gates at HKIA, where thousands of Afghans had flocked in a desperate attempt to flee their home country as the Taliban returned to power in a lightning offensive in the weeks ahead of the U.S.-announced Aug. 31 withdrawal.

More than 160 Afghan civilians and dozens more were wounded in the bombing — one of the single deadliest incidents of the 20-year war. The fallen troops were the last American casualties of the war launched in the weeks after the 9/11 terrorist attacks in 2001.

“The American service members went above and beyond the call of duty to protect citizens of the United States and our allies to ensure they are brought to safety in an extremely dangerous situation as the Taliban regained control over Afghanistan,” the bill that Biden signed Thursday reads. “The American service members exemplified extreme bravery and valor against armed enemy combatants [and] … dedicated their lives and their heroism deserves great honor.”

The Congressional Gold Medal dates back to the American Revolution and serves as the “highest expression of national appreciation for distinguished achievements and contributions” that Congress can bestow, according to a House description of the award. It has been awarded 173 times to individuals or groups of people.