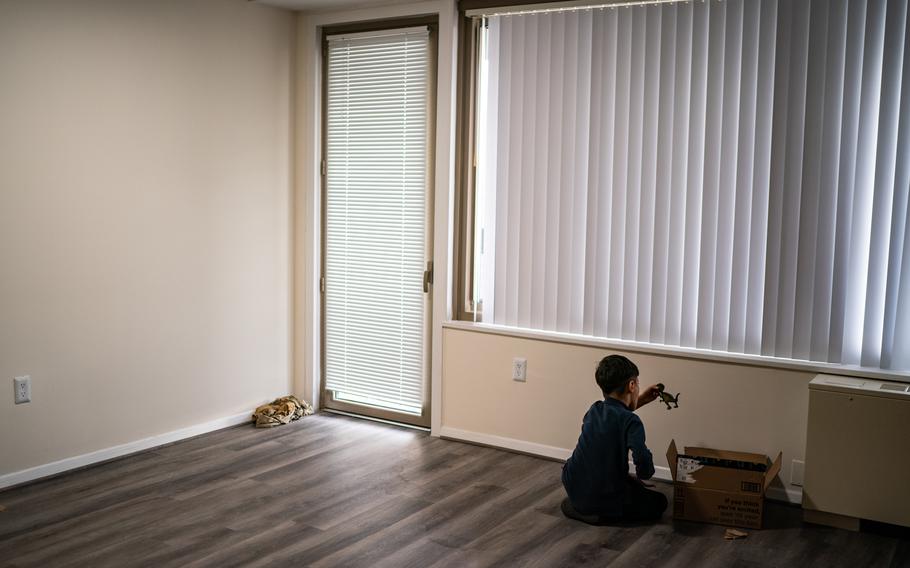 An Afghan child plays with donated toys in his family's empty living room in Falls Church, Va., on Dec. 6. The family is looking for a resettlement agency to sponsor them. (Salwan Georges/The Washington Post)

Refugee resettlement groups in the Washington, D.C., region are scrambling to keep up with a massive influx of Afghan evacuees, leaving families waiting for housing and other services in a situation that could soon worsen as U.S. officials prepare to shut down temporary housing sites in military bases.

Since the historic airlift out of Kabul in August, more than 3,700 Afghan evacuees have been resettled in the District of Columbia, Maryland and Virginia, the bulk of them arriving under “humanitarian parole” and their future in the country uncertain.

Resettlement agencies say the flood of Afghans that federal officials have sent to the region — primarily Northern Virginia — has been faster than expected, putting a strain on caseworkers and other personnel whose numbers were cut during the Trump administration, when the number of refugees allowed to enter the country was steadily reduced to historical lows.

Before the Kabul airlift, “We had the staffing level to serve 500 people a year,” said Kristyn Peck, chief executive of Lutheran Social Services of the National Capital Area (LSSNCA), one of three local resettlement groups serving Northern Virginia.

Peck has hired 35 additional workers since July — but, she said, “You can’t go to a staffing level to serve 500 people a month overnight.”

“We just know that at this volume, frankly, our quality is suffering,” she said.

Federal and state officials have tried to ease the burden by imposing some restrictions on who can receive aid in areas that already have a high number of evacuees, an attempt to also control the impact on schools and the local supply of affordable housing.

For example, resettlement agencies in Northern Virginia — a magnet for evacuees because of the region’s already large Afghan population, but with a costly housing market that has made finding permanent homes challenging — are now assigned cases only where the evacuees have a family connection in the region who can temporarily house them.

Evacuees who show up to their offices without first being assigned to their organization by the U.S. State Department are either being turned away or provided with limited aid, such as food stamps and basic medical care.

“We’re not stopping anybody at one point or another from coming to Virginia,” said Seyoum Berhe, the state refugee coordinator through the Virginia Department of Social Services. “But if we’re going to provide services, you must have a family connection. We want to do the best job we can but have to take numbers that we can at least attempt to manage.”

The evacuees are each entitled to receive $2,275 in federal support that is meant to cover housing costs, job training and other expenses over a three-month period once they are matched with a resettlement agency.

The high demand for such aid was on display inside the LSSNCA’s office in Annandale one recent morning. Clusters of evacuees arrived to an increasingly full lobby to see case managers who were already busy with other clients. 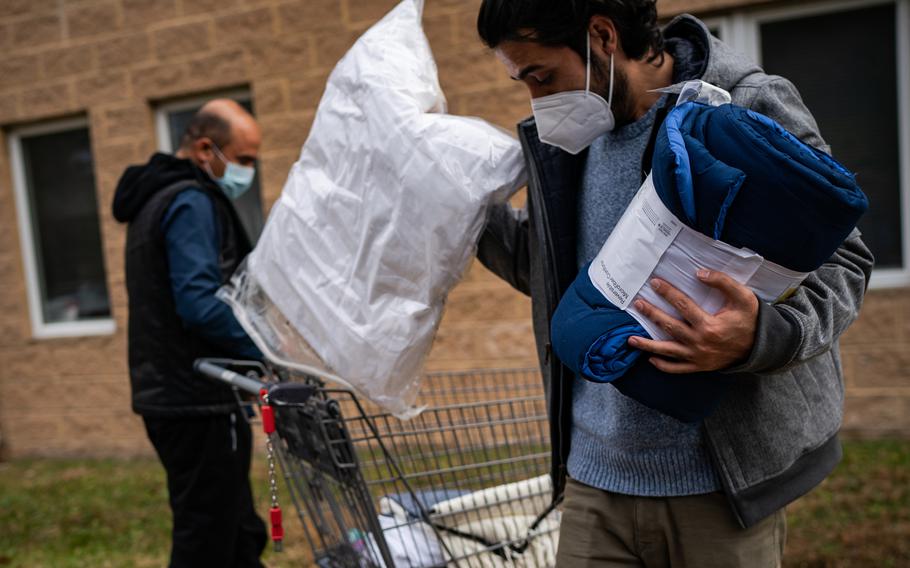 Nahzatullah Wror, 29, didn’t have an appointment that day. But after arriving in the United States the week before, he traveled an hour from his uncle’s home in Loudoun County to see what kind of help his family of four could get after not hearing from their overburdened case manager. The case manager showed up at Dulles International Airport 2½ hours late the day the Wror family arrived from Poland, where the family spent three months at a hotel.

“This is not the way that we should be treated,” said Wror, who has a special immigrant visa after working with U.S. officials as a psychological operations specialist for the former Afghan National Army.

“I know that I am a load on my uncle,” he said. “We’re 10 people living in two bedrooms. That’s really difficult.”

Federal officials say they are working to spread the evacuees to different parts of the country as they begin to shut down the temporary housing camps at seven military bases that are still home to 34,000 Afghans. The process is expected to be completed by mid-February.

For example, the evacuees are being offered free housing in Oklahoma, officials said. They are also pointed to other parts of the country with more job opportunities.

“We are tying to implement a system here that allows for the successful permanent resettlement of our new Afghan neighbors across the country in places that meet their needs,” said Curtis Ried, deputy to former Delaware governor Jack Markell, the White House’s point person on Afghan resettlement. “But we also don’t want to overwhelm any one area.”

But not everyone wants to disperse to parts unknown in the country. One is a 32-year-old man, who spoke on the condition of anonymity out of concern for his family’s safety.

Last month, he and his wife took their three children out of the U.S. Air Force’s Joint Base McGuire-Dix-Lakehurst in New Jersey when it appeared likely that they would be paired with a resettlement group in a different part of the country.

They arrived in Alexandria, Va., and — borrowing from friends in the area — rented a $2,000-per-month apartment with no means of keeping the home. The man traveled from resettlement agency to resettlement agency in the region in search of long-term aid before finding help at Catholic Charities of the Diocese of Arlington.

“They will send you to Alaska or Arizona,” he explained about his move, while his wife baked Afghan bread in their newly renovated kitchen. “I don’t have support there. I don’t know the culture there.”

Local resettlement agencies say they’re seeing the effects of that desire to stay in the Washington region. An Afghan family makes a traditional flatbread after people donated flour for them in Falls Church, Va., on Dec. 6. (Salwan Georges/The Washington Post)

Peck said her organization initially committed to serving 1,775 evacuees during the federal fiscal year that began in October. Then, the Biden administration asked the organization to increase that number to 2,400, assigning those extra evacuees to the LSSNCA within two weeks with the understanding that more will come, she said.

The Ethiopian Community Development Council (ECDC) committed to serving 400 evacuees at its main office in Arlington County, also more than the group initially told federal officials it would be able to handle, said Emily Gilkinson, a group spokesperson. More than 200 of those evacuees have already shown up, with the rest expected within the next two months, she said.

“Our Arlington office and other offices are all staffing up,” said Gilkinson, adding that the ECDC expects to serve a total of 6,000 evacuees at its 21 sites nationwide. “They are receiving more than double the number of cases that they received in all of 2021 in just a few months, so the challenge is immense.”

Complicating matters is the fact that many of the evacuees arrived in the United States without IDs or other documents proving who they are, making it harder to set them up with homes and work authorization, aid groups say.

Krish O’Mara Vignarajah, chief executive of the Lutheran Immigration and Refugee Service, the LSSNCA’s parent organization, said that issue points to a longer-term problem for the Afghans who arrived under humanitarian parole. The designation grants them permission to remain and work in the United States for two years, with no path to U.S. citizenship.

Many might want to apply for asylum, a lengthy process requiring a lot of documentation that they didn’t consider when they were destroying their IDs and other records on their way out of Afghanistan to avoid being targeted by the Taliban, Vignarajah said.

“But that same documentation that might be a death sentence in Afghanistan could be the key to win an asylum case here in the U.S.,” she said. Vignarajah, along with other advocates, has been pushing for Congress to pass the Afghan Adjustment Act, which would allow evacuees to apply for lawful permanent residence, which would eliminate the need for an asylum application.

The Biden administration has also been pushing for such a law while steering more funds toward Afghan resettlement. Since September, an additional $13.3 billion has been authorized for that effort.

Berhe, the refugee coordinator for Virginia, said the extra funds — amounting to $30 million in his state over a three-year period - will help with mental health counseling, job training and, more urgently, emergency housing assistance.

That could help the scores of evacuees who have shown up to the region from the military bases with no guarantee of local aid and no job prospects.

Bita Golshan Lotfi, director of the Immigrant and Refugee Outreach Center, said her McLean-based nonprofit has helped nearly 60 such families connect with a resettlement group while supplying them with donated clothes and food.

“They’re coming without a resettlement agency, without furniture, without anything,” she said.