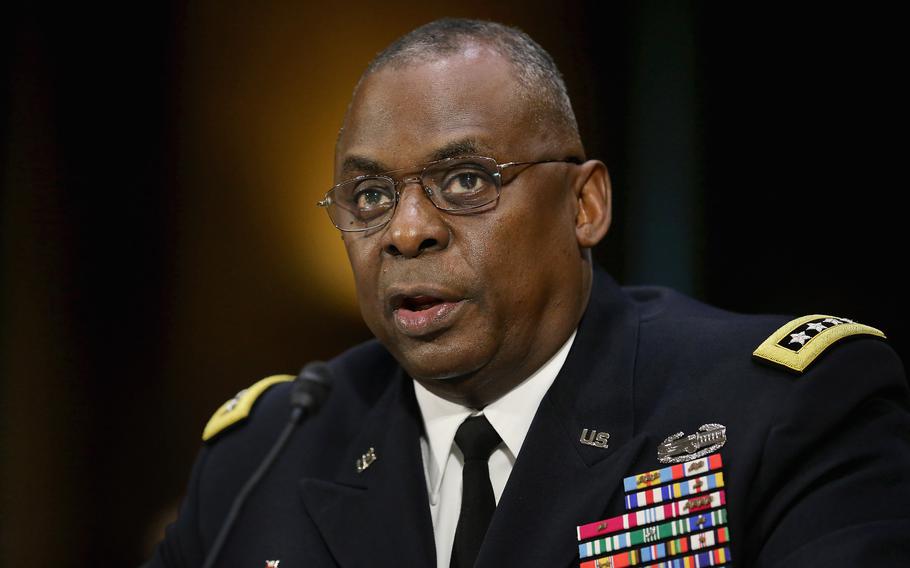 Gen. Lloyd Austin III, commander of U.S. Central Command, testifies before the Senate Armed Services Committee on Capitol Hill, Sept. 16, 2015, in Washington, D.C. Austin told a security conference in California on Saturday, December 4, 2021, that the U.S. is prepared for China's "assertive" posture in the Indo-Pacific area and beyond. (Chip Somodevilla/Getty Images/TNS)

(Tribune News Service) — Defense Secretary Lloyd Austin said the U.S. will stand up to an “increasingly assertive and autocratic” China in the Indo-Pacific region and beyond, calling its activity “disturbing.”

One way to counter China’s military modernization, growing nuclear capabilities and technological advances is to strengthen U.S. alliances in the region, Austin told a security conference in California on Saturday, fresh from a visit to South Korea.

On visits to seven countries in the Indo-Pacific region since becoming President Joe Biden’s defense chief, Austin said he consistently heard Washington’s partners call for the U.S. to “continue playing our stabilizing role” there, he said. “And make no mistake: we will.”

That means joint military exercises, deepening research and development relationships and encouraging Europe’s “helpful and growing security role” in the region, he said.

China’s rise also “means new areas of competition in space and cyberspace, where the norms of behavior aren’t well-established and the risks of escalation and miscalculation are high,” Austin said.

At the same time, he reiterated comments by Biden that the U.S. isn’t seeking conflict with China and will seek to “do everything to dial down the temperature whenever possible.”

Biden and Chinese leader Xi Jinping cited the need for cooperation during their first face-to-face summit in November, a video call that lasted more than three hours but yielded no major breakthroughs in relations. Since then, the U.S. and China have also cooperated in releasing crude reserves in an attempt to bring down oil and gasoline prices.

Yet the next diplomatic conflict with China is already in sight after the Biden administration included Taiwan among the 110 invitees to a democracy summit on Dec. 9 and 10, a decision intended to signal solidarity with a key democratic ally in the region.

The U.S. will look for ways to do more for Taiwan, Austin said, without elaborating.

On Nov. 28, China sent the biggest sortie of warplanes toward Taiwan in more than seven weeks. Twenty-seven Chinese aircraft, including eight J-16 fighter jets, entered Taiwan’s southwest air defense identification zone, prompting the island’s foreign minister to say on Twitter that the “coercive action is obviously meant to bring #Taiwan to its knees & keep us away from democratic partners.”

“We’re clear-eyed about the challenge China presents,” Austin said. “But China’s not 10 feet tall. This is America.”