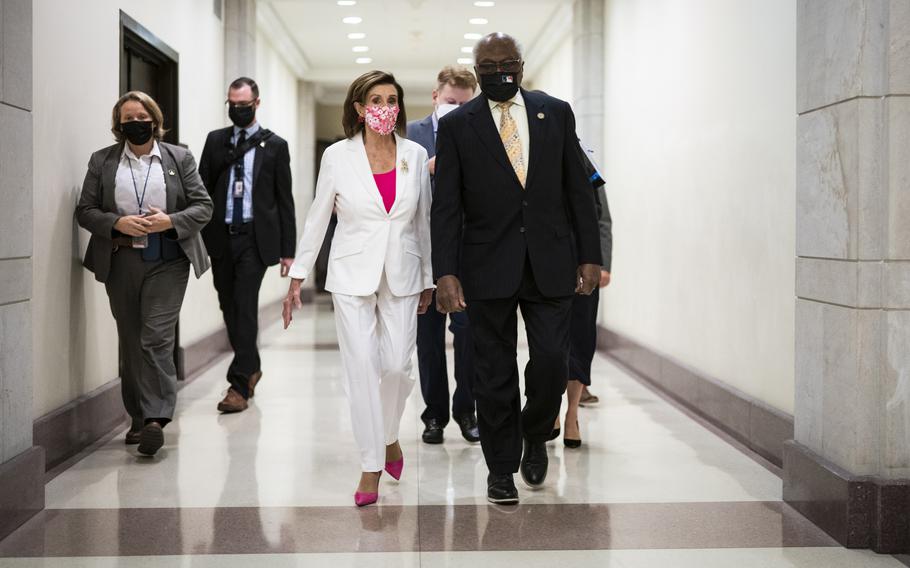 WASHINGTON — The clock is ticking on congressional Democrats as they return to Washington this week, where they hope to advance President Joe Biden’s economic agenda, authorize key defense programs and resolve a slew of urgent fiscal deadlines with little time left to the year.

The flurry of policy battles set the stage for a politically discordant December on Capitol Hill at a moment when tensions between Democrats and Republicans are running high — and fears are resurfacing nationwide about a potential setback in the coronavirus pandemic.

For lawmakers, their most immediate charge is to prevent a government shutdown. A short-term measure that funds federal agencies and initiatives is set to expire on Friday, meaning the House and Senate need to act swiftly to adopt another spending fix or risk a major disruption.

Then, Democrats and Republicans may have less than two weeks to avert a second crisis: They must move to preserve the country’s ability to borrow to pay its bills, addressing the cap known as the debt ceiling, or Washington will experience its first-ever, economy-crippling default.

The two tasks normally engulf the Capitol in partisan warfare, as lawmakers turn the debates into political proxy fights over the future of federal spending. The tensions could flash especially in the waning hours of this year, as Democrats simultaneously seek to approve a roughly $2 trillion package to overhaul the country’s health care, education, climate, immigration and tax laws — a sprawling effort backed by Biden that Republicans vehemently oppose.

But Democrats in recent days have projected an air of optimism, stressing they can balance the routine duties of governance with their own political aims — and accomplish their full slate of policy objectives before the end of 2021.

“As you know, the legislative agenda for the remainder of 2021 is considerable,” Senate Majority Leader Chuck Schumer, D-N.Y., told lawmakers in a letter before they departed for the Thanksgiving break, later adding: “I am confident we can get each of these important items done this year, but it will likely take some long nights and weekends.”

The prospect of final, four-week sprint offers a fitting coda to an intense, frenetic year on Capitol Hill. Democrats have rushed to try to enact as much of their agenda as possible in the 10 months they have controlled the White House, the House, and the Senate, a position of power they have not held since the very first days of 2011.

Party lawmakers adopted a $1.9 trillion relief package at the height of the pandemic in March, muscling past vocal GOP objections. They steered to passage a more bipartisan, $1.2 trillion infrastructure proposal that Biden signed into law in November. And Democrats took the first steps on a final, roughly $2 trillion bill to bolster the social safety net, which cleared the House before Thanksgiving despite unanimous Republican opposition. It now awaits a vote in the Senate.

For all their public squabbles and private late-night fights, Democrats attribute significant economic gains to their legislative efforts. The latest unemployment measure from the Labor Department last week, for example, found that new jobless claims had tumbled to their lowest levels since November 1969. But Republicans allege that Democrats’ spending — combined with a surge in pent-up demand — has contributed to a spike in prices that amounted last month to the largest such annual increase in about 30 years.

New, unexpected economic challenges arose last week, amid reports about a novel coronavirus variant dubbed as omicron. While little is known about its transmissibility, its arrival nonetheless rattled markets and governments into the weekend — prompting a raft of travel restrictions not seen since the darker, earlier days of the public health crisis.

Speaking to reporters Friday — on a day when the Dow Jones industrial average fell by more than 900 points — Biden said the administration remains “cautious” about the trajectory of the variant. But he also maintained he was not “not at all” concerned about the short-term turmoil in the stock market.

For now, congressional lawmakers are set to arrive in Washington and attend to their agenda as planned. In the Senate, Democrats and Republicans this week hope to finalize a roughly $768 billion annual measure to authorize key defense programs, sorting through hundreds of amendments, including an attempt to repeal a resolution that permitted the Iraq War.

Once its work is complete, the Senate plans to turn its attention later in the month to finalizing the $2 trillion measure known as the Build Back Better Act. Lawmakers still must work through a thicket of unresolved policy issues, including lingering concerns about its price tag previously raised by Sen. Joe Manchin, D-W.Va., a centrist without whom Democrats cannot bring the bill to a vote. Manchin also has sounded public objections to some of its specific components, such as its provision to provide paid family and medical leave benefits to millions of Americans.

In doing so, party leaders must further confront a slew of procedural issues, since they have opted to advance the roughly $2 trillion tax-and-spending endeavor through the Senate using a special process known as reconciliation. The move allows Democrats to sidestep a GOP filibuster, but only if they hew to strict rules that limit their policymaking specifically to issues that implicate the budget. The process opens the door for a raft of behind-the-scenes haggling with the chamber’s parliamentarian that is set to intensify this week.

Addressing the Senate before the Thanksgiving break, Schumer said he hopes to complete work on the bill before Christmas. In the meantime, Democratic leaders in Congress also must respond to two more rigid political deadlines — beginning with an urgent need to fund the federal government by Dec. 3.

Democrats and Republicans brokered an initial, short-term extension at the end of September, narrowly averting a shutdown, in a move that offered them more time to craft spending bills that could cover Washington operations through the 2022 fiscal year that ends in September. But their work remains far from finished even as the stopgap nears its expiration, opening the door for another round of eleventh-hour sparring over a temporary fix.

In recent weeks, lawmakers in the House and Senate have warred in part over how long a second stopgap measure should last. Democrats including Rep. Rosa DeLauro, D-Conn., the leader of the House Appropriations Committee, have sought only a brief extension in an attempt to keep up the pressure on Republicans to come to a deal on a dozen longer-term spending proposals covering major federal operations. Those fuller appropriations bills would enact Biden’s broader budgetary goals, securing new funding in areas including housing, education and health care.

Republicans, however, hope to adopt a measure that funds the government into the spring or later. GOP lawmakers including Sen. Richard Shelby, R-Ala., the leader of his chamber’s appropriations panel, previously has identified March as a preferred timeline. Otherwise, Republicans have opposed Biden’s long-sought spending increases as well as Democrats’ efforts to slash funding for defense.

In recent days, Democratic leaders have eyed late January as a potential end date for a new spending arrangement, according to two people familiar with the matter who requested anonymity to describe negotiations that are still in flux. Once a date is settled, some in the party hope they can sidestep any political histrionics and adopt the stopgap in time for the Dec. 3 deadline — though some House Republicans in recent days have tried to instigate a political feud.

Taking to Twitter this weekend, Rep. Marjorie Taylor Greene, R-Ga., even went as far as to call on her party to shut down the government in order to oppose Democrats’ spending agenda and thwart Biden’s recent federal mandates on vaccines.

In the end, though, the two parties must come to an agreement, particularly in the narrowly divided Senate, where Democratic votes alone cannot keep the government functioning uninterrupted. The precarious political dynamic prompted the Biden administration to call on Congress earlier this month to reach a full-year deal rather than proffer a series of stopgaps.

“Congress has a long history of reaching bipartisan appropriations agreements that benefit the American people and fund critical public health services,” the Office of Management and Budget stressed in a public memo at the time. “Over the coming weeks, lawmakers have an opportunity and obligation to do so again.”

The next critical fiscal deadline could arrive 12 days later, at which point Congress must act to address the country’s borrowing cap known as the debt ceiling. Unless lawmakers raise it by a specific amount or suspend it entirely, the U.S. government could fall behind on its payments, an unprecedented calamity that could thrust the country back into an economic recession.

In October, lawmakers reached an eleventh-hour agreement to raise the debt ceiling by more than $300 billion, essentially giving Washington the power to borrow into early December. The deal came after weeks of political brinkmanship driven chiefly by Republicans, who initially refused to supply their must-have votes in the Senate as part of a campaign to undermine Biden’s economic agenda.

Exiting that battle, Senate Minority Leader Mitch McConnell, R-Ky., stressed at the time that the GOP would not support another increase. He instead demanded that Democrats address the debt ceiling on their own, relying on the same parliamentary maneuver that they intend to use to pass their $2 trillion economic package. In response, Schumer reaffirmed his refusal to invoke the process known as reconciliation, creating a logjam.

Since then, though, Democratic and Republican leaders have toned down their rhetoric in recent weeks. McConnell said at a news conference earlier in November that he thought lawmakers eventually would “figure out how to avoid default,” and the GOP leader has held private talks with Schumer to discuss the debt ceiling along with other pending business in the final weeks of the year. Both offices declined to comment on the talks.

In the meantime, though, the exact debt-ceiling deadline is not entirely clear. In a letter to lawmakers earlier in November, Treasury Secretary Janet Yellen has said the government can confidently pay its bills until Dec. 15. After that, she said there are “scenarios in which Treasury would be left with insufficient remaining resources to continue to finance the operations of the U.S. government beyond this date.”

The Bipartisan Policy Center, meanwhile, has suggested the deadline known as the “x-date” could come as late as mid-February. The divergence reflects the difficulty in calculating Washington’s cash flows at the end of the year, particularly amid the extraordinary spending levels during the pandemic.