Supply shortages are easing in US and worsening in Europe 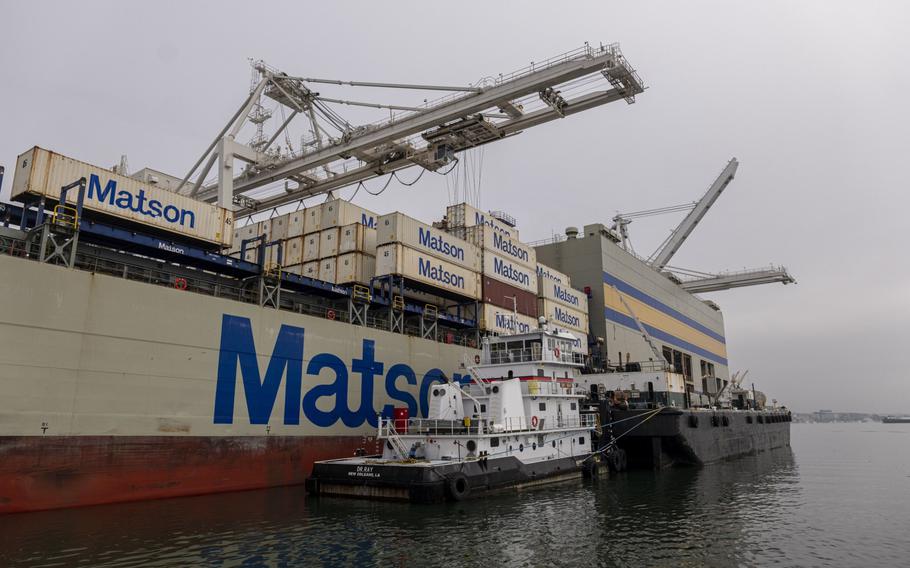 A Matson cargo ship at the Port of Oakland in Oakland, Calif., on Nov. 19, 2021. (David Paul Morris/Bloomberg)

The supply crunch that has helped drive inflation to multi-decade highs shows some signs of easing in the U.S. -- but it's still getting worse in Europe.

That's the takeaway from the latest readings on Bloomberg Economics' new set of supply indicators. The U.S. measure declined in October, while remaining at a historically elevated level, suggesting shortages are becoming less severe.

If the trend continues into 2022, sticker-shock for U.S. consumers should begin to fade. That could make life at least a bit easier for newly reappointed Federal Reserve Chair Jerome Powell, who's under pressure to tighten monetary policy as prices surge.

The improvement in the U.S.'s supply crunch backs up President Joe Biden's view that bottlenecks are easing after his administration moved to smooth operations at West Coast ports. His popularity has fallen recently amid economic concerns like inflation, with just 43% of voters approving of his job performance, according to an analysis of polls by FiveThirtyEight.

"More goods are moving more quickly and more cheaply out of our ports, onto your doorsteps, and onto store shelves," Biden said Tuesday. Major retailers such as Walmart, Target and Home Depot "have confirmed that their shelves will be well-stocked in stores this holiday season," he said.

The U.S. supply indicator -- and comparable Bloomberg Economics gauges for the euro area and U.K. -- draws on a range of data from factory gate prices to inventories and order backlogs. Positive readings, as in the past few months, point to constraints, while negative ones -- like in the early months of the COVID crisis -- mean goods are relatively abundant.

The U.S. measure shows that supply shortages peaked in the summer and have been trending modestly lower since then. That's helped by declines in the backlog of orders and prices for manufacturing firms, both of which have edged down from summer highs. So have prices for industrial materials, and the order-to-inventory ratio for retailers.

Not all components of the U.S. gauge are improving. Supply constraints in the services sector continue to worsen, and the shortage of workers doesn't appear to be easing. With the country's inflation rate at 6.2% and expected to climb higher in the coming months, one concern for the Fed will be if temporary drivers of high prices -- linked to the supply crunch -- give way to more lasting ones as wages pick up.

In the euro area, the Bloomberg Economics gauge shows conditions are still getting worse. Supply shortages helped push inflation in the bloc to 4.1% in October, the highest in two decades.

There's one shred of relief for inflation hawks at the European Central Bank: The pace of deterioration appears to be slowing.

Still, the orders-to-inventory ratio at Europe's factories and shops continues to rise. And in Germany, the continent's economic powerhouse, the number of openings for every job seeker is also increasing -- a labor deficit that could start to drive wages higher.

The picture is broadly similar in the U.K., whose gauge hit a fresh high in October.

Measures for producer prices, inventory levels and labor-market conditions all show shortages becoming more severe. The impact of rapid reopening from pandemic lockdowns, a global phenomenon, has been exacerbated by something that's unique to Britain: trade frictions after the country's exit from the European Union.

With U.K. inflation at 4.2%, the Bank of England is expected to raise interest rates sooner than its peers at the Fed and ECB. Still, all these central banks face a similar risk. Rate hikes that stifle demand rather than boosting supply may end up quashing economic recoveries as well as inflation.