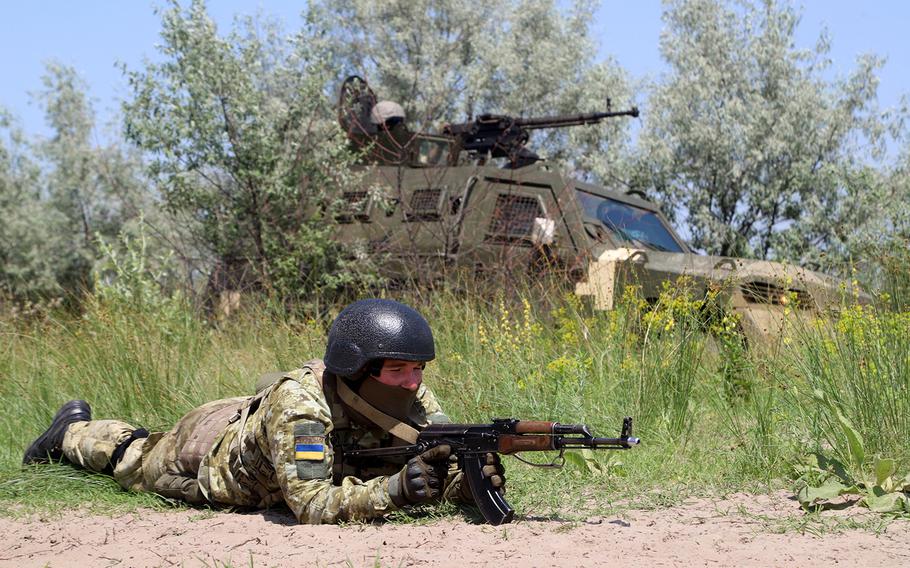 A Ukrainian army soldier takes part in the Sea Breeze drills at the shooting range in the Kherson region of Ukraine on July 2, 2021. (Oleksandr Gimanov, AFP via Getty Images/TNS)

WASHINGTON (Tribune News Service) — The U.S. has shared intelligence including maps with European allies that shows a buildup of Russian troops and artillery to prepare for a rapid, large-scale push into Ukraine from multiple locations if President Vladimir Putin decided to invade, according to people familiar with the conversations.

That intelligence has been conveyed to some NATO members over the past week to back up U.S. concerns about Putin’s possible intentions and an increasingly frantic diplomatic effort to deter him from any incursion, with European leaders engaging directly with the Russian president. The diplomacy is informed by an American assessment that Putin could be weighing an invasion early next year as his troops again mass near the border.

The information lays out a scenario where troops would cross into Ukraine from Crimea, the Russian border and via Belarus, with about 100 battalion tactical groups — potentially around 100,000 soldiers — deployed for what the people described as an operation in rough terrain and freezing conditions, covering extensive territory and prepared for a potentially prolonged occupation.

Two of the people said about half that number of tactical groups already is in position and that any invasion would be backed up by air support.

The two people said that Moscow had also called up tens of thousands of reservists on a scale unprecedented in post-Soviet times. They explained the role of reservists in any conflict would be to secure territory in a later phase after the tactical battalions paved the way. Russia hasn’t publicly announced any major call-up of reservists.

One of the people said the U.S. had also shared information about an exponential rise in disinformation targeting Kyiv and that Moscow has recruited agents to try and sow destabilization inside Ukraine.

Putin last week denied any intention to invade but welcomed the alarm as evidence his actions had gotten the attention of the U.S. and its allies, which he accused of failing to take Russia’s “red lines” over Ukraine seriously enough.

America and others are not saying a war is certain, or even that they know for sure Putin is serious about one. The people said it is likely he has not yet decided what to do. Secretary of State Antony Blinken said this month: “I can’t speak to Russia’s intentions. We don’t know what they are.”

A senior administration official said the U.S. has under Biden demonstrated it is willing to use a number of tools to address harmful Russian actions and would continue to do so. The White House said it had no further comment.

The Russian leader has a history of brinkmanship and prior buildups on the border have come to naught. But officials say he is positioning to act if he wanted to, and they note that even as troops withdrew from an earlier escalation in April they left equipment behind, making the fresh buildup faster and easier.

For Putin, Ukraine is unfinished business after his annexation of Crimea in 2014. He sees Ukraine as part of Russia and bristles at its outreach with the west, especially its nascent military engagement with NATO. While he has said he doesn’t want a war, in a speech last week he said his goal was to keep the U.S. and its allies on edge for “as long as possible, so nobody gets it into their head to cause a conflict we don’t need on our western borders.” He lambasted the U.S. and others for expanding military infrastructure in Ukraine and stepping up naval missions in the Black Sea and flights by warplanes along Russia’s borders.

Russian officials have said they want to see NATO stop its expanding cooperation with Ukraine and what Moscow sees as a buildup along its borders. There has also been some discussion of a fresh summit between Putin and U.S. President Joe Biden to defuse tensions. At the same time, Russian authorities understand that any attempt to occupy large amounts of Ukrainian territory militarily would face widespread public opposition on the ground and trigger sweeping western sanctions that could batter the Russian economy, people close to the leadership said.

Further diplomatic flurries are likely, while the U.S. has been considering re-upping and expanding a package of measures it put together this year during the prior troop buildup which could include sanctions.

Ukrainian Defense Minister Oleksii Reznikov visited Washington last week and asked the Pentagon for more help defending the country’s airspace and coast. Ukraine’s foreign minister also traveled to Brussels last week. Echoing the U.S. concerns, its defense intelligence agency chief told the Military Times he believes Russia could be preparing for an attack by the end of January or early February involving airstrikes, amphibious assaults and an incursion though Belarus.

Kremlin spokesman Dmitry Peskov dismissed such talk on Sunday, saying, “this hysteria is being built up artificially.”

“The ones who are accusing us of some kind of unusual military activity on our own territory are themselves sending their armed forces from across the ocean. I mean the United States of America. It’s not very logical and not very decent,” he told state television.

For Biden, the actions of the Russian president present multiple challenges. They could freshly test his administration’s appetite to intervene militarily offshore. America only months ago had a a messy withdrawal of its troops from Afghanistan after two decades of conflict there. Biden has had to focus political strength on domestic priorities like his economic agenda and dealing with rising prices at the gas pumps and grocery store registers.

The latest frictions come against a broader backdrop. Not only are troops massing again, but record-high gas prices leave Europe vulnerable to Russian largess on supplies. European Union members including Poland have also accused Russia of encouraging a refugee crisis as its ally Belarus funnels migrants toward the bloc. And a Russian weapons test that blasted a satellite out of orbit scattered a large field of debris, prompting U.S. accusations it had endangered the International Space Station’s crew.

Still, one of the people with knowledge of U.S. intelligence said these events are not believed to be part of a wider plan but are being exploited opportunistically by the Russian president.

Tensions between Russia and Ukraine blew up in 2014, when Moscow annexed the Crimean Peninsula and backed a separatist rebellion in the east of the country. That triggered sweeping U.S. and European sanctions, but the conflict has continued, killing about 14,000 people in east Ukraine. Two of the people said that any new attack would be on a scale far greater than seven years ago.

One of the people said a potential joint response needed to be agreed soon among allies that would be unequivocal and overwhelming if implemented, adding there was still a window of opportunity to deter Putin. It’s unclear at this stage if that would include a possible military response. French Foreign Minister Jean-Yves Le Drian on Sunday said any violation of the Ukraine border by Russia would lead to “extremely grave consequences.”

Collaboration with Russia could also be cut off, said the person. Officials had noted small improvements in relations since Biden and Putin met in Geneva in June, including working together to tackle issues like climate change, making Moscow’s latest maneuvers all the more striking, the person added.

The U.S. warnings of potential invasion are seen in Moscow as a sign that Washington — at least so far — has no intention of compromise and is rallying trans-Atlantic unity against Russia. “The U.S. is laying the groundwork for a unified sanctions response,” said Dmitry Suslov, an expert on Russia’s relations with the U.S. and Europe at the Higher School of Economics in Moscow.

While Western nations do not currently know the Kremlin’s intentions, they believe that military options are being presented and have little doubt that what they’re hearing and seeing would allow for a large scale attack should Putin decide to make a move in the new year. The people said the U.S. had high confidence in the reliability of the information it had shared with allies.