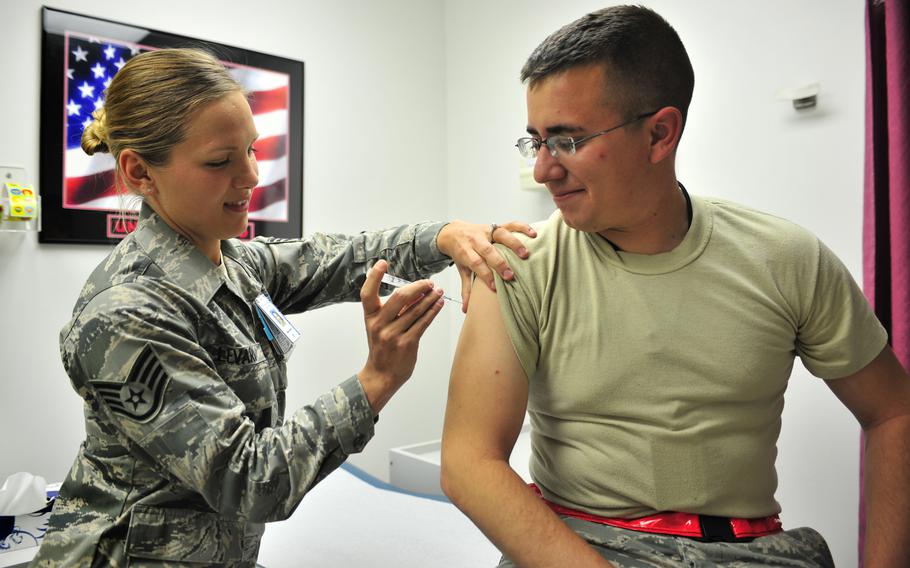 Military doctors and public health officers are advocating for a new vaccine mandate for active-duty troops that they say would prevent most cervical cancer in women and slow the growing threat of throat cancer in men.

Even amid resistance to the Pentagon’s COVID-19 vaccination mandate, they are urging all active-duty troops up to age 26 to be inoculated against HPV if they haven’t already taken the vaccine.

An editorial in the current issue of the journal Military Medicine lists some of the numerous vaccinations that are already required of service members. It argues that “it is time for the military” to add the HPV vaccine to the list.

“With more than half of the 1.3 million service members in the catch-up vaccination age range of less than 26 years of age, we are poised to have a profound impact through mandatory active duty service member vaccination,” the editorial states.

Maj. Erica Hope, a gynecological oncologist at Brooke Army Medical Center who co-authored the editorial, said in an interview that mandating the vaccine would prevent a great deal of illness, suffering and its associated costs.

“Australia mandated the HPV vaccine for schoolchildren in 2007. They’re projected to fully eliminate cervical cancer in 20 years,” Hope said. “We could do the same.”

The vast majority of HPV-related throat cancers are in white men, and some studies have shown that military veterans are at greater risk.

Certain strains of HPV cause more than 90% of cervical cancers and some 70% of throat cancers. It’s estimated that 80% of adults will have the infection at some point.

The HPV vaccine became available 15 years ago and was first recommended for girls of middle school age, as it worked best before people became sexually active and exposed to the virus.

Some countries mandated the immunization for schoolchildren, as did the U.S. states of Hawaii, Rhode Island and Virginia as well as the District of Columbia. The vaccine is now recommended for people up to 45 years old.

But uptake has been low, despite the vaccine’s excellent safety and effectiveness profile.

Researchers using data from the 2010-2018 National Health Interview Surveys estimated that only 42% of women 18 to 21 had gotten at least one dose of the vaccine, which requires two shots, six months apart. Just 16% of men that age had received at least one dose.

“There’s been this stigma around the vaccine, and there’s also been a stigma for men,” Hope said. “They just think it’s a women’s disease.”

Service member HPV vaccination rates are lower than civilian rates, she said, with only 26% of active-duty women 17 to 26 years old reporting that they received one shot and less than half of those getting the second dose. Only 6% of active-duty men the same age reported getting even one shot.

“The vaccination rate for women is low,” Hope said. “But for men, it’s abysmal. That’s obviously our big missing piece.”

German virologist Harald zur Hausen, who was awarded a Nobel Prize for demonstrating the connection between HPV and cervical cancer and laid the groundwork for the vaccine, has argued that it’s at least equally vital for males to be vaccinated as females because they act as HPV superspreaders.

“All over the world, young men between 15 and 45 have far more sexual partners than girls in the same age group. They transmit the infection relatively easily,” zur Hausen told Germany’s dw.com news outlet.

The HPV vaccine is one of only two cancer-preventive vaccines in existence. The other, the hepatitis-B vaccine, which prevents some forms of liver cancer, has been required for military recruits since 2002.

It’s not only cancer that the vaccine mandates would address, Hope said, but also the time, trauma and expense in dealing with female troops’ pre-cancers found during routine checkups.

“All these Pap-smear visits, the biopsies, it requires a lot of visits, and it costs a lot of money and a lot of time away from work,” she said. “We’ve had numerous patients with abnormal Pap smears before deployment. It can delay deployment.”