by
Tony Romm and Marianna Sotomayor
• The Washington Post • November 16, 2021 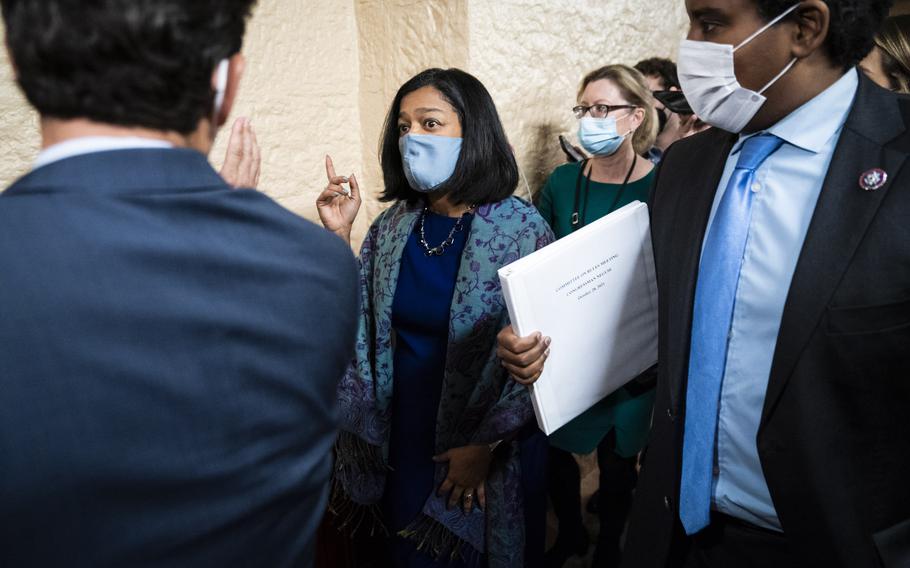 WASHINGTON — House Democrats hope to begin debate as soon as Wednesday on a roughly $2 trillion proposal to overhaul the country's health care, education, climate, immigration and tax laws, aiming to adopt the sweeping measure by the end of the week.

In the Senate, meanwhile, Majority Leader Chuck Schumer, D-N.Y., told reporters that he hopes his chamber can complete debate on the tax-and-spending bill before Christmas. The plan only adds to the pressure on party lawmakers as they prepare to sort through a wide array of additional unresolved policy and fiscal challenges with the end of the year rapidly approaching.

The roughly $2 trillion bill known as the Build Back Better Act would expand Medicare to include hearing benefits, authorize universal prekindergarten for all American children, invest new sums to combat climate change, and offer a slew of new tax benefits chiefly to aid low-income Americans. Democrats hope to finance the plan through new policies targeting millionaires and companies that pay little in federal taxes.

But the package has been stalled in the House and Senate, largely as a result of cost concerns aired by moderate Democratic lawmakers. An attempt to advance the bill in the House earlier this month faltered after centrists said they wanted to see an official financial analysis to determine if it added to the deficit.

Such a review is expected before the end of the week from the Congressional Budget Office, according to the scorekeeping arm of the Capitol. In recent weeks, White House officials and other supportive Democrats have pointed to existing evidence that shows the package is financed in full. But Hoyer, speaking to reporters Tuesday, said moderates still want the "confidence" that their unofficial estimates are "the reality."

"They're in agreement to vote on this this week," the majority leader said.

The schedule only illustrates the intense, end-of-the-year scramble ahead for Democrats.

As they labor to advance the remainder of Biden's agenda, they also face a series of key deadlines — starting on December 3, at which point Congress must fund the government or face the prospect of a federal shutdown.

For months, lawmakers have warred over the contours of a spending agreement that would sustain Washington's operations for the remainder of the 2022 fiscal year, which concludes at the end of September. Writing her caucus on Tuesday, Rep. Rosa DeLauro of Connecticut, the top Democrat on the House Appropriations Committee, blasted Republicans for failing to act swiftly and put forward a counterproposal.

"If there is no proposal, the consequences of not acting are reckless, irresponsible and would prevent us from making critical funding adjustments in our federal budget to address ongoing and new challenges the American people face," she said in a letter.

GOP lawmakers, however, have maintained for days that they want Democrats to back down on a slew of specific spending proposals - including the potential removal of language known as the Hyde Amendment that bars federal funding for abortion. Citing that concern, Sen. Roy Blunt, R-Mo., on Tuesday added that Republicans also hope to raise defense spending beyond what Biden and some of his party support.

"We need to get realistic about what has to be in the bill," said Blunt, whose comments came as Republicans have called instead for a short-term spending stopgap that would fund government operations into the spring.

In resolving those battles, Democrats and Republicans also must soon raise or suspend the debt ceiling, otherwise the United States could once again face the risk of defaulting on its obligations. That deadline is expected to arrive some time in December or later, though lawmakers are officially awaiting guidance from the Treasury Department.

For now, Democrats have said little about how they plan to proceed, as they face the potential that Republicans could once again withhold their votes in the narrowly divided Senate. Speaking to reporters at his weekly news conference, Senate Minority Leader Mitch McConnell, R-Ky., said little of his strategy, stressing only that lawmakers historically have steered clear of a devastating default.

"We'll figure out how to avoid default, we always do," he said.

Schumer, meanwhile, maintained his hope that any debt ceiling resolution would be "bipartisan" in nature. Otherwise, he sidestepped questions as to whether Democrats might invoke a special Senate procedure to raise the debt ceiling on their own, a process known as reconciliation that the party has resisted in the past.

In doing so, Schumer also acknowledged the significant work still on the chamber's political horizon.

"We have funding the government, we have debt limit, we have [Build Back Better], and we have the defense bill," he told reporters. "That's a huge agenda for December, and the end of November, but we aim to get it all done."

The week began on a note of jubilation for Democrats, as Biden joined lawmakers from both parties at the White House for a ceremony to sign a roughly $1.2 trillion infrastructure package into law. The bipartisan deal took months to complete, at one point becoming a political casualty in the grand war among Democrats over the future of the president's other spending priorities.

But party lawmakers broke the logjam after liberals, who wanted the two bills to move together, ultimately agreed with moderates to pass solely the infrastructure measure and return to the rest of Biden's agenda this week. Their joint statement affirming their pact included a pledge from centrists such as Reps. Josh Gottheimer, D-N.J., and Stephanie Murphy, D-Fla., who said they would lend their support after seeing a financial analysis of the bill — or alternatively work with liberals in the event the numbers came out skewed.

Entering the week, liberal and moderate lawmakers each sounded an upbeat note, marking a notable shift from the months of public sparring between them. Rep. Pramila Jayapal, D-Wash., the head of the left-leaning congressional Progressive Caucus, told reporters late Monday that she still believes "we'll get a vote this week."

Murphy, the head of the centrist-leaning Blue Dog Coalition, separately said after an evening vote that she believes it is "important that we don't draw red lines" on supporting the final package. Asked about the prospects of a negative score from the CBO, she said lawmakers need to take in "all the information and the specifics of the bill."

One potential trouble area for Democrats is their proposal to empower the IRS to pursue tax cheats, an idea that they believe could raise hundreds of billions of dollars to pay for their spending initiatives. Historically, the CBO has evaluated these provisions unfavorably, raising the possibility that the scorekeeper's upcoming report could show the overall package adds to the deficit even as Democrats contend otherwise.

In an encouraging sign for the president, though, Murphy said lawmakers are "all well aware there's going to be a discrepancy around the IRS piece."

"Let's just reserve judgment until we see the whole package," she said.