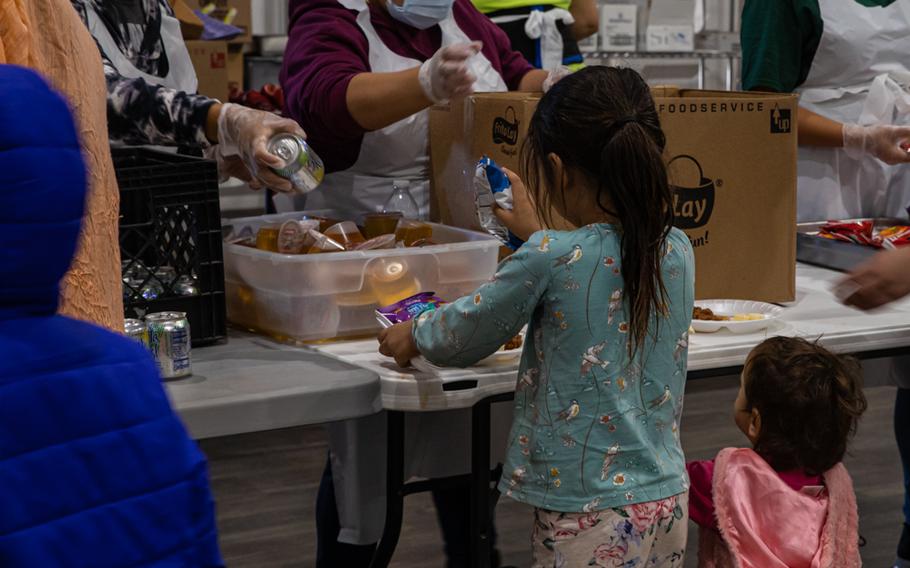 Near the outdoor recreation area is the Women’s Morale, Welfare and Recreation Center where girls and women dance the Attan, Afghanistan’s national dance. Nearby other women crochet and watch over children who color and are entertained by a Bollywood movie.

This is how Afghan refugees living on Holloman air Force Base pass the time while they await resettlement.

The refugees — Task Force Holloman call them guests — live in the tent city on the base that just months ago was desert full of scrub brush. From that desert, base staff and the refugees themselves created Aman Omid Village — a name which the Village’s governor Col. Curtis Velasquez said expresses what each person there is searching for: Peace and hope.

Velasquez said the Village is “this generation’s Ellis Island,” the immigration inspection station in New York Harbor that was active between 1892 and 1954. The residents of Aman Omid Village do not leave until they are ready to fly out to their resettlement location.

The team of Americans who collaborate with the Afghan refugees on the base is a multi-departmental group known as Task Force-Holloman, which is made up of service members, Department of Homeland Security (DHS), U.S. State Department and the Department of Defense.

“The collective efforts here of DHS, Department of State and ( Department of Defense) are focused in on one simple goal, and that is the successful resettlement of each and every Afghan guest that we have under our care,” Matt McKeehan of the Department of Homeland Security said. McKeehan is the federal coordinator for Operation Allies Welcome on Holloman Air Force Base.

At Aman Omid Village adults and children are taught English and take courses on cultural orientation. They learn about Daylight Savings Time and the history of Thanksgiving, concepts that are everyday to Americans. When hungry they can access two mess halls that serve halal food and drinks including Pepsi products and a variety of teas. Children are given toys donated by Toys for Tots — choosing between child-sized guitars and Minnie Mouse plush dolls. An Afghan child colors in the letters of the English alphabet during the opening of a new education center at Aman Omid Village on Holloman Air Force Base, N.M., Oct. 19, 2021. (Anthony Ford/U.S. Army) A Department of Homeland Security volunteer points out different U.S states on a map during the opening of a new education center at Aman Omid Village on Holloman Air Force Base, N.M., Oct. 19, 2021. (Anthony Ford/U.S. Army)

To protect the Afghan refugees staying on Holloman Air Force Base, they are not photographed or fully identified. This includes State Department worker Bibi.

Bibi, however, spoke freely about her experiences during the fall of Kabul, her journey to Holloman Air Force Base and her plans once she and her family — those who were able to escape Afghanistan — are settled.

“It was a really bad experience,” Bibi said. “It was very rushed. We were crowded and the Taliban was surrounding us.”

The Taliban fired on Bibi and her family even as they asked why they were going into the airport, Bibi said.

After four days, Bibi and her family got into the airport but got separated from Bibi’s father, uncle and cousin who are still in Afghanistan, Bibi said.

“The Taliban was hitting us. They were hitting my mom, my aunt and my brother with a gun and with a so-big stick in the right shoulder,” Bibi said making the approximate width of the stick with her hands.

Bibi said she and her family were assaulted and then were told no planes were available to take them to the U.S. and that they should leave the airport. A second violent encounter with the Taliban was followed by a three hour wait for Bibi, her mother, aunt and brother who then managed to enter Kabul Airport, Bibi said.

“That was like a bad nightmare,” Bibi said. “This was the first time I had seen the Taliban.”

That was not Bibi’s mother’s first experience with the Taliban.

“About 20 years back, Taliban doing the same thing again now with the ladies, they are hitting the ladies now,” Bibi said. “(The Taliban are hitting) children, even the men who had hairstyles or they’re wearing pants not like Peraahan-Tonbaan, what Afghani wears. They’re hitting my brother because he was wearing a locket.”

When Bibi, her mother, aunt and brother were inside Kabul Airport, they were met by U.S. Army soldiers who were nice, Bibi said.

“They told us, ‘You’re gonna be okay, you are now our citizens. You are becoming an American. We are protecting you from the Taliban. You are good,’” Bibi said. “Now I’m just worrying about my dad (my uncle and one of my cousins) because we got separated... The rest of my family with us, my aunt, another cousin and my grandpa’s second wife, she is also with us in here, in this camp ( Aman Omid Village).”

Bibi and her family were taken from Kabul to Qatar, where they stayed for 14 days before heading to Ramstein Air Base in Germany.

Bibi said the experience in Qatar was nice.

The family stayed in Germany for two months before being transferred to Holloman Air Force Base.

Bibi hopes to get her pilot’s license one day. ‘A shocking incident’ The parents’ story

“It was a shocking incident happened two months or more before in Afghanistan and no one was expecting to happen,” Yunus said. “But it happened and we were in unwanted situation.”

The U.S. government were helpful to the Sajid family, Yunus said.

However, the process of leaving Afghanistan was fraught with hardships particularly when going through Taliban checkpoints, Yunus said.

“It was horrible (when entering the Kabul Airport) and will be remembered always in our minds forever,” Yunus said. “Finally, we made it and we came to Germany to Ramstein (Air Base) and we spent more than a month there. So, we hopped over and entered the U.S. and finally to our last stop here at Holloman Air Base.”

Holloman Air Force Base is the last stop before resettlement for the Afghan refugees staying there.

Aman Omid Village, for all its amenities, is still a tent city.

“It’s a temporary place so (it has) basic life facilities,” Rohafza said. “We are hoping to have our final destination; our own house, our own rooms. We are happy for all the facilities they are providing. We don’t have so much expectations... It’s better than some other places we have heard from our friends.”

The situation is a new experience, even for the youth, Yunus said.

“(The U.S. government) are trying their best to provide what is necessary or needed but it is not desirable, of course,” Yunus said. “We hope that we will get out of this situation. This is not a permanent situation.”