(Tribune News Service) — Freshta Ahrar, a young Afghanistan woman who has worked for the U.S. government and the United Nations, said the sudden takeover of her country by the Taliban in August turned “normal life” into “hell” — especially for women.

But Ahrar, 29, considers herself lucky. She and her immediate family were among thousands of Afghan refugees who were evacuated and now make their temporary home at Holloman Air Force Base.

She said she has no idea what is in store for her friends and family back home. For several years, Ahrar worked in policy development in the country, which has fallen back under Taliban control. The Islamic fundamentalist group quickly overthrew the government in August while American troops were leaving the country after a 20-year war.

“You know, to be honest, at the moment, I have no idea what is going to happen,” Ahrar said in a phone interview with the Journal. “The moment I will say is a crisis. ... And life as a woman, before this situation we were being threatened or intimidated. We were targeted. But now that the entire country has been taken over (by the Taliban), I cannot imagine being a female there.”

Ahrar is one of roughly 4,400 Afghanistan evacuees currently staying in southern New Mexico at Holloman, said Angelo Fernandez, a spokesman for the Department of Homeland Security.

He said the DHS, along with the defense and state departments, are some of the federal agencies working with those Afghans on resettlement. They have different types of visas and work authorizations.

He said Holloman is one of eight “safe haven” locations around the country. About 2,400 Afghans have already relocated from Holloman to other cities, he said.

“The U.S. government is working around the clock to conduct security screening and vetting of vulnerable Afghans before they are permitted entry into the United States, consistent with the dual goals of protecting national security and providing protection for our Afghan allies,” a DHS spokeswoman said in an email. “As with any population entering the United States, DHS, in coordination with interagency vetting partners, takes multiple steps to ensure that those seeking entry do not pose a national security or public safety risk.” 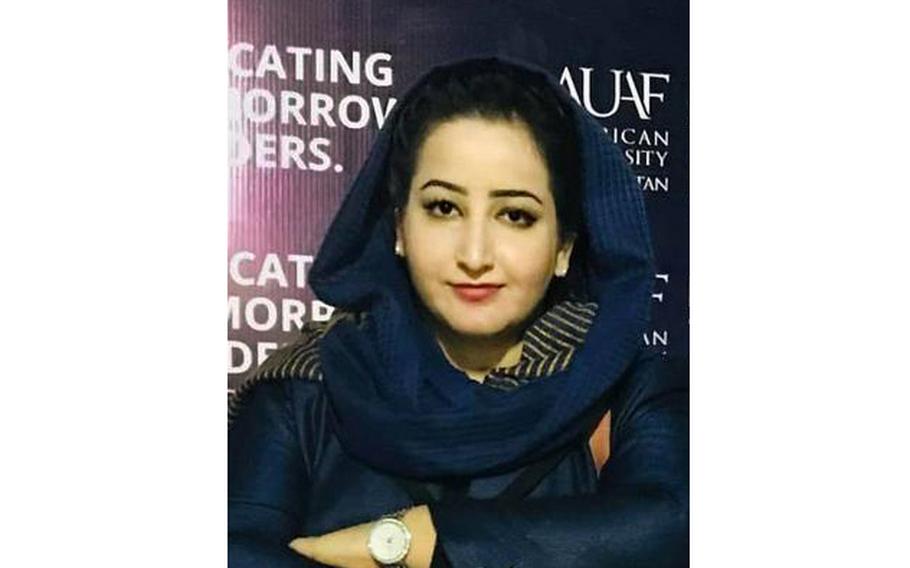 Customs and Border Protection, Immigration and Customs Enforcement, the Transportation Security Administration, the U.S. Coast Guard and the U.S. Secret Service were among the agencies that processed, screened and vetted the Afghan nationals, many of whom worked directly for the U.S., according to DHS.

Ahrar and her family plan to settle in California, where the family has personal connections. Ahrar’s husband is currently in Italy, waiting to meet his wife in America.

She was born in Kabul, Afghanistan, in 1992 — at a time when Islamic guerrillas were fighting for control of the country.

Ahrar and her family fled to Pakistan, where she was educated before returning to Afghanistan as a high school student in 2007, after the Taliban had been removed from power during America’s longstanding war in the country.

She earned a bachelor’s degree in English before attending the American University of Afghanistan, where she graduated with a master’s in business administration.

Ahrar worked for the U.S. Agency for International Development, USAID, and then for the United Nations Children’s Fund, UNICEF. She currently works remotely for the agency from Holloman. Part of her focus for those agencies was on policy development in her native country. She received a humanitarian civil service award from the United Nations.

“Afghanistan was in its peak of development,” she said of her time working in the country. “It was amazing.” Her job for both those agencies was to try to empower women, who face restrictions under Islamic law. Ahrar said that, as a woman working in Afghanistan, she often kept her career a secret.

Ahrar was shopping with her sister in August when the Taliban took control of Kabul. She said it happened suddenly — banks and businesses started closing down and ATMs stopped working in the middle of the day.

“It was a normal life changing to hell,” she said. “So this happened within just a glimpse, you know, it was so palpable. A normal life going on. And then all of a sudden, something like that.”

Ahrar said she received an email from the U.S. embassy that contained an attachment that would give her and her family access to the airport.

They were part of a sea of humanity who converged on the airport in August. They surrendered to the Taliban at a checkpoint at one point, but they ultimately made their way inside the airport.

Once inside, Ahrar said she and her family had to wait several days under direct sunlight and through cold nights before boarding a plane to Abu Dhabi on Aug. 22. They stayed in Abu Dhabi for nearly two months before being flown to Holloman, arriving on Oct. 22.

Ahrar said she worries about those back in Afghanistan, including her in-laws and her friends. She said she is especially concerned for her former classmates and teachers at the American University, which she said will make them vulnerable under Taliban control. She said she still stays in contact with those friends, who don’t know when or if they will be able to evacuate.

“I am lucky that, out of millions of people, I was able to get myself out of the situation over there,” she said.