Colin Powell remembered as a model for future generations 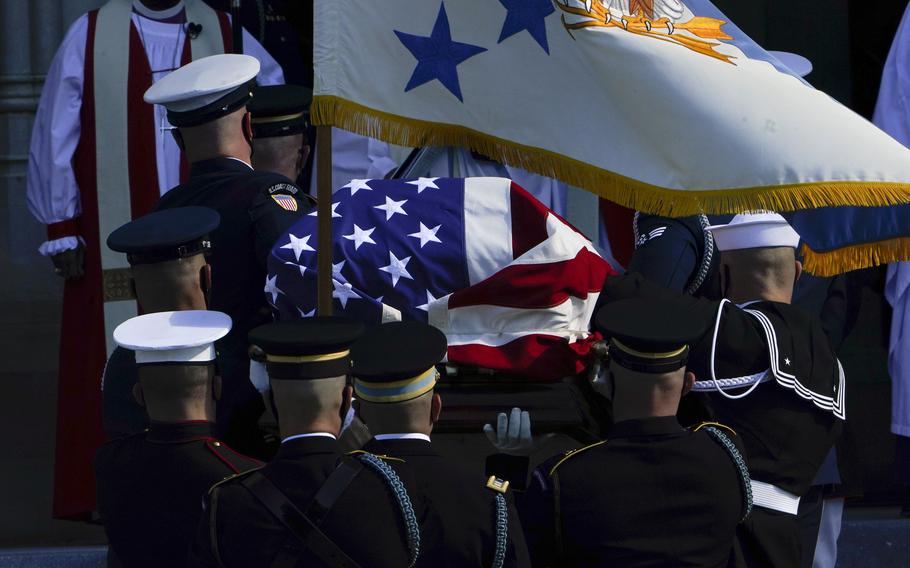 The flag-draped casket of former Secretary of State Colin Powell is carried into the Washington National Cathedral for a funeral service in Washington, Friday, Nov. 5, 2021. (Manuel Balce Ceneta/AP)

WASHINGTON — Colin L. Powell, the trailblazing soldier-diplomat who rose from humble beginnings to become the first Black secretary of state, was remembered by family and friends Friday as a principled man of humility and grace whose decorated record of leadership can serve as a model for generations to come.

"The example of Colin Powell does not call on us to emulate his resume, which is too formidable for mere mortals," his son, Michael, said in a touching tribute at his father's funeral service at Washington National Cathedral. "It is to emulate his character and his example as a human being. We can strive to do that."

Two recent presidents did not attend — Bill Clinton, who is recovering from a severe infection, and Donald Trump, who publicly disparaged Powell after his death for having been critical of the former president.

Powell died Oct. 18 of complications from COVID-19 at age 84. He had been vaccinated against the coronavirus, but his family said his immune system had been compromised by multiple myeloma, a blood cancer for which he had been undergoing treatment.

Funeral attendees Friday were required to wear masks. Not all did.

As guests gathered in the cavernous cathedral that has hosted the funerals of several past presidents, including Dwight D. Eisenhower, the U.S. Army Brass Quintet played a range of tunes, including "Dancing Queen" by Abba, a favorite of Powell's.

Richard Armitage, who served as the State Department's No.-2-ranking official while Powell was secretary of state during the Bush administration, recalled the day Sweden's foreign minister, Ann Linde, came to call and — knowing of Powell's affection for Abba — presented him with a full CD set of group's music.

"Colin immediately went down on one knee and sang the entire 'Mamma Mia' to a very amused foreign minister of Sweden and to a gob-smacked U.S. delegation. They'd never seen anything like it," said Armitage, who described a 40-year friendship with Powell that began while both served in the Pentagon.

Madeleine Albright, who was Powell's immediate predecessor as secretary of state, called him "a figure who almost transcended time," and "one of the gentlest and most decent people any of us will ever meet."

"He relished the opportunity to connect with other generations," she said.

"This morning my heart aches," she added, "because we've lost a friend and our nation one of its finest and most loyal soldiers. Yet even as we contemplate the magnitude of our loss, we can almost hear a familiar voice asking us — no, commanding us — to stop feeling sad, to turn our gaze once again from the past to the future and to get on with the nation's business while making the most of our own days on Earth, one step at a time." 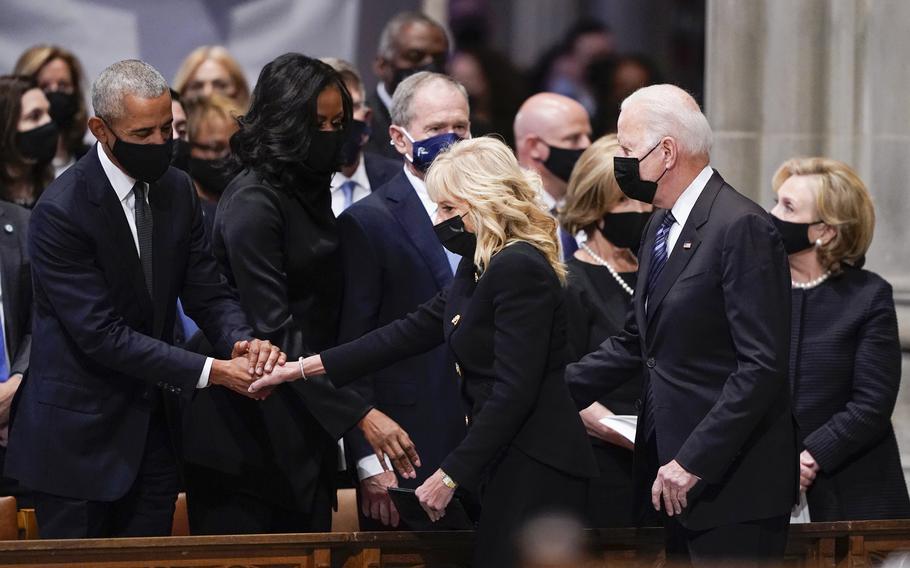 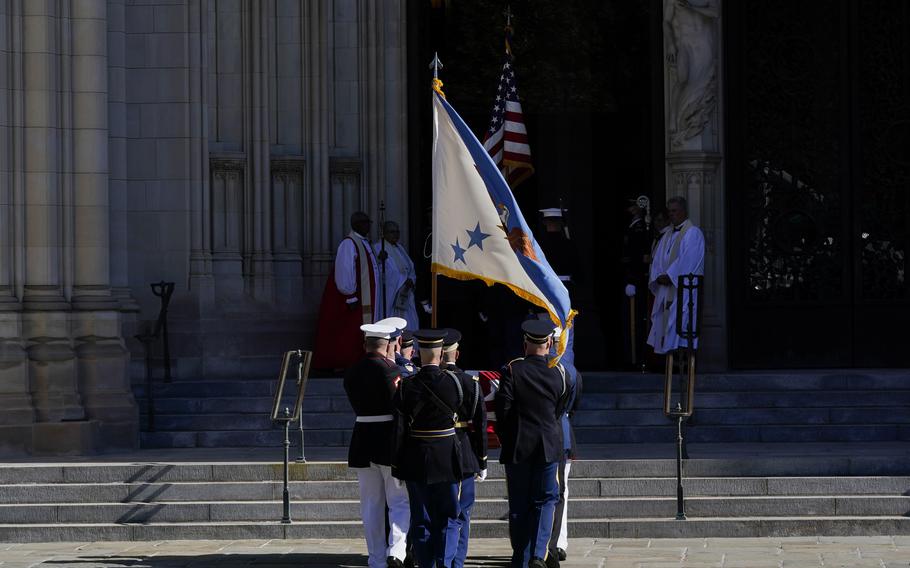 The flag-draped casket of former Secretary of State Colin Powell is carried into the Washington National Cathedral for a funeral service in Washington, Friday, Nov. 5, 2021. (Manuel Balce Ceneta/AP) 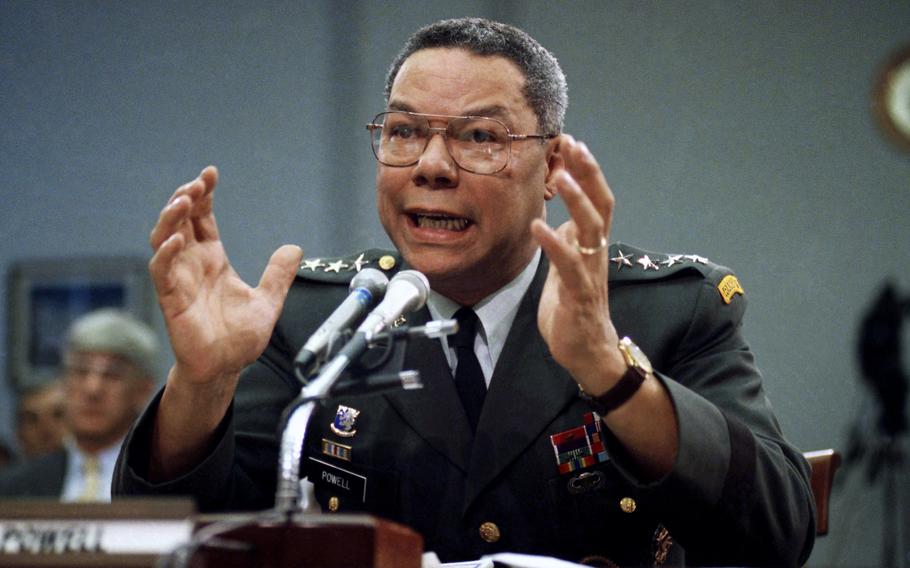 In this Sept. 25, 1991, file photo, Gen. Colin Powell, chairman of the Joint Chiefs of Staff, speaks on Capitol Hill in Washington, at a House Armed Services subcommittee. (Marcy Nighswander/AP)

During her tenure as ambassador to the United Nations during the Clinton administration, Albright sometimes clashed with Powell, although they became good friends. Both have recalled the time, during his final months as Joint Chiefs chairman, when she argued for a U.S. military intervention in the Balkans, asking why the United States had built a superb military if it couldn't be used in such circumstances. Powell recalled being so irritated by her statement, "I thought I would have an aneurysm."

Powell's view was that the United States should commit its military only when it had a clear and achievable political objective, a key element of what became known as the Powell Doctrine, which embodied lessons learned from the U.S. failure in Vietnam.

The story of Powell's rise to prominence in American life is a classic.

In his autobiography, "My American Journey," Powell recalled a 1940s childhood in the Hunts Point section of New York City's South Bronx, where he was a mediocre student — happy-go-lucky but aimless.

He caught the military bug during his first year at the City College of New York in 1954. Powell was inspired by seeing fellow students in uniform, and he enrolled in the school's Reserve Officer Training Corps.

"I felt distinctive" in uniform, he wrote.

Although he was only 4 when the United States entered World War II, he had vivid memories of the war years. "I deployed legions of lead soldiers and directed battles on the living room rug," he wrote — a fantasy forerunner of his Army years.

Powell would serve 35 years in uniform. Commissioned in 1958, he served around the world, including two tours in Vietnam in the 1960s.

He distinguished himself at the Pentagon even before he attained flag officer rank. In the late 1970s he worked in the Office of the Secretary of Defense, and in 1983 as a brigadier general he became the senior military assistant to Defense Secretary Caspar Weinberger. He later served in the White House as President Ronald Reagan's national security adviser, and in 1989 he was promoted to four-star general. Later that year, President George H.W. Bush selected him to be the first Black chairman of the Joint Chiefs.

It was a trailblazing American dream journey that won him international acclaim and trust.

He put that credibility on the line in February 2003 when, appearing before the United Nations as secretary of state, he made the case for war against Iraq. When it turned out that the intelligence he cited was faulty and the Iraq War became a bloody, chaotic nightmare, Powell's stellar reputation was damaged.

Still, it wasn't destroyed. After leaving government, he became an elder statesman on the global stage and the founder of an organization aimed at helping young disadvantaged Americans. Republicans wanted him to run for president. After becoming disillusioned with his party, he ended up endorsing the last three Democratic presidential candidates, who welcomed his support.