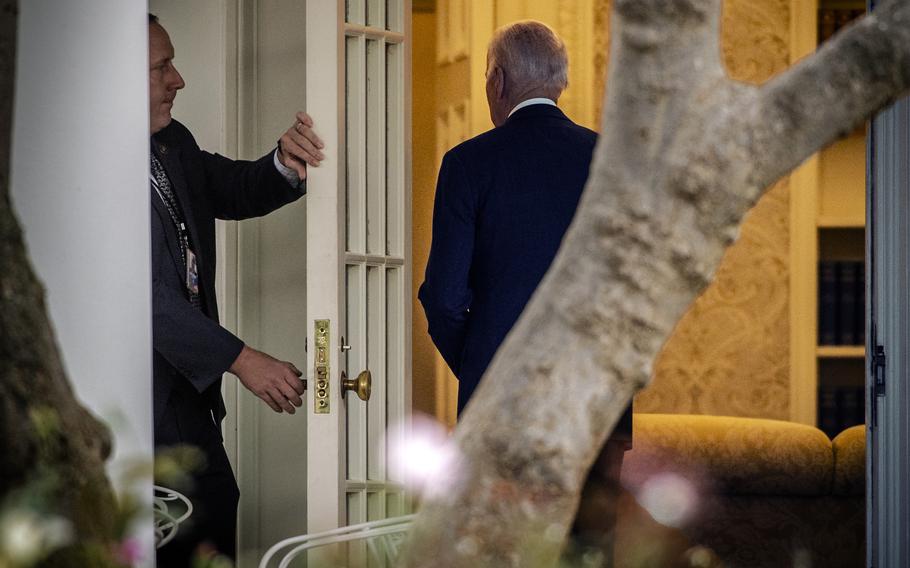 ROME — President Joe Biden basked in a warm glow from America's allies on his first foreign trip as president last June, deploying the reassuring promise that "America is back." But four and a half months later, as Biden heads to his second round of international summits, U.S. allies are less certain that is the case.

The leaders of America's closest partners have watched Biden's popularity plummet while former president Donald Trump has begun holding raucous election-style rallies and making his trademark provocative or false pronouncements on a range of issues. And that is raising questions about the durability of any promises by — or agreements with — the current administration.

"After four years with Trump the world is very, very, curious whether this is a lasting new direction of American politics, or we could risk a return to Trumpism in 2024," said Anders Fogh Rasmussen, a former Danish prime minister who served as NATO Secretary General. "It will be an uphill effort for Biden to convince his allies and partners that he has changed American attitudes profoundly."

Rasmussen said world leaders are watching Virginia's gubernatorial election on Nov. 2 and would view a loss — or even a narrow win — by Democrat Terry McAuliffe as a warning sign. "It would add to some skepticism in Europe that the declaration that 'America is back' is only temporary," Rasmussen said.

With Trump holding out the prospect of running again, and given a strong chance of claiming the GOP nomination if he does, foreign leaders are viewing Biden's actions through the prism of American politics to a degree rare in recent years.

Biden is scheduled to fly to Rome on Thursday, where he will meet with Pope Francis and French President Emmanuel Macron, then head into a two-day summit this weekend of the G-20 group of economic powers. Next week, Biden will take part in a major climate conference in Glasgow, Scotland.

Biden hoped to bolster his credibility by arriving at those summits having struck a deal on his infrastructure and safety-net bills. That would codify some of his pledges to the international community, making his commitments harder for future presidents to undo.

As of Thursday morning, Biden was expected to announce a framework for a deal on the bills. But the details were uncertain, leaving a possibility that the president would have to intersperse his meetings with heads of state over the next few days with the occasional call home to a member of Congress.

Biden in recent days has implored lawmakers to move on his agenda in part by arguing that a failure to do so would erode his standing abroad. Rep. Ro Khanna, D-Calif., told CNN that during a meeting with liberal lawmakers, the president "looked people in the eye and said the prestige of the United States is on the line."

An agreement could bolster Biden's central message on the world stage: that democracies are capable of tackling and solving the globe's major problems. Sen. Brian Schatz, D-Hawaii, who helped craft the climate portion of Biden's agenda, said a congressional deal is necessary to signal a true shift away from Trump.

"The essential element is to show that the Congress can enact big, bold, meaningful climate action, and we're on the cusp of doing so," Schatz said.

If Biden instead ends up enacting key elements of his climate and social agenda through executive orders or new regulations, that would mean a future president could reverse them, as Trump undid many of President Barack Obama's initiatives.

United Nations Secretary General António Guterres said in an interview that such rapid switches in policy in the past have not inspired mutual confidence. U.S. climate policy, he noted, has already shifted dizzyingly from Obama to Trump to Biden.

"The fact that a policy has changed dramatically — twice, with changes of president — is not good for the trust that other countries can have in one country," Guterres said. "But that is the reality in democratic life, and we need to accept that reality."

It is not only Trump's potential reemergence that is rattling U.S. allies in the Biden era. France last month temporarily recalled its ambassador to the U.S. — an unusual move for such close allies — after Washington announced a defense agreement with Australia that infuriated France by undercutting its own submarine deal with Canberra.

Beyond that, many leaders, including America's partners in NATO, were shaken by the rocky American withdrawal from Afghanistan.

And the uncertainty over U.S. leadership comes at a particularly chaotic time, as the pandemic still rages in many countries that have been unable to secure vaccines, and as world leaders prepare to confront climate change at the Glasgow summit.

The U.S. has promised to donate 1.1 billion doses of the vaccine to other countries, making it the largest donor nation in the world, but global health advocates say that is far from enough to cover the need. Allies, particularly in Europe, are emerging from the pandemic with a new appreciation for the importance of an independent supply chain and the downfalls of relying too heavily on the United States.

The French and others have floated the notion of a European defense and economic structure that would be less dependent on U.S. self-interest, which they call "strategic autonomy." Under this idea, which Biden is expected to discuss when he meets with Macron, Europeans would take more responsibility for their own defense and the manufacture of critical products.

"European strategic autonomy is goal number one for our generation," Charles Michel, who heads the European Union's policymaking body, said in a recent message posted on Twitter. "We are sending a message not only to our own citizens, but also to the rest of the world: Europe is a world power."

Some allies believe that while Biden represents a stylistic improvement over Trump, he has not done enough to reverse his predecessor's unfriendly policies, fueling a concern that America's long-term trend is toward withdrawal and disengagement.

They stewed last summer as Biden declined to remove restrictions on travel from Europe; those limits are now set to lift in early November, far later than most Europeans believe was merited. And they remain perplexed that many of Trump's tariffs have remained in place.

"This has been a sobering four-and-a-half months for our European partners," said Heather Conley, formerly a State Department official under President George W. Bush and now vice president at the Center for Strategic and International Studies, during a recent media briefing. "They have now come to the realization, to the acknowledgment, that there is much more continuity in U.S. policy than they thought. Tactical differences, of course, but continuity."

Jitters over the new administration extend beyond Europe, particularly to countries that depend heavily on U.S. military protection. China experts cite Biden's difficulties talking about Taiwan, which he has twice this year committed to protecting, only to have the White House issue statements walking back his comments.

That occurred most recently during a CNN town hall this month when an audience member asked Biden if he would "vow" to protect Taiwan. Biden responded by saying "yes" — prompting the White House to insist that there has been no official change in strategy from the longtime U.S. position of "strategic ambiguity" toward the island.

Husain Haqqani, a former Pakistani ambassador to the U.S., is among those who point to the chaotic U.S. withdrawal from Afghanistan, which caught many in the international community off-guard, as a turning point. Biden had promised during his presidential campaign to pull out of the country, but the suddenness and messiness of the withdrawal took many aback.

"If you're a country that has depended on the U.S. for hard security, you're a little skeptical," Haqqani said in an interview. "There's a view that America as a whole is turning isolationist."

The bigger picture is that the U.S. has become increasingly hesitant to use military power, he said. Biden appears to share that reluctance, and that reduces American influence, added Haqqani, who is now a senior fellow at Hudson Institute.

"I don't think that 'America is back' is anything more than a slogan in the domestic political arena of the United States," Haqqani said. "What Trump and Biden have demonstrated is that both have succeeded electorally by focusing inward, playing to their respective constituencies within a very polarized America."

The Washington Post's Seung Min Kim and Brady Dennis contributed to this report.