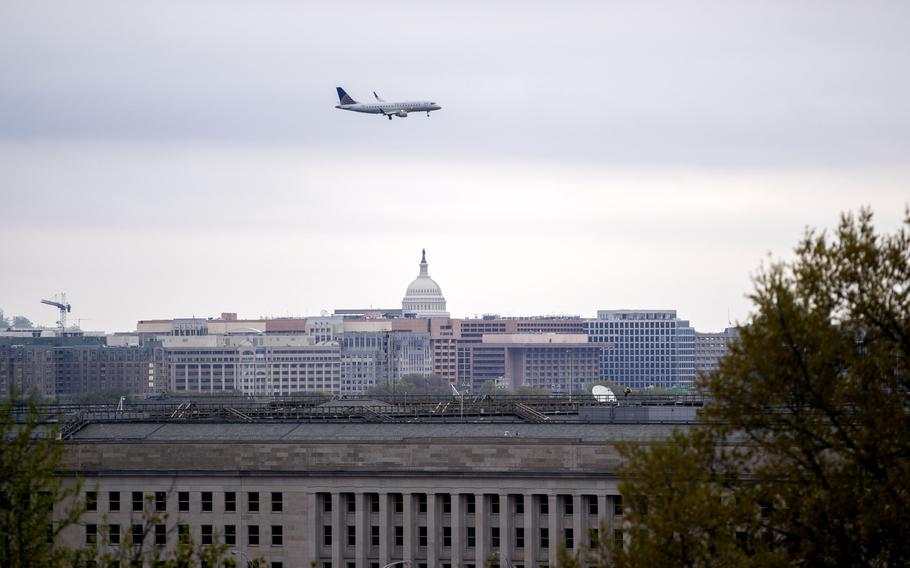 A United Airlines plane flies above the U.S. Capitol and the Pentagon building in Arlington, Va.., on April 9, 2021. (Stefani Reynolds/Bloomberg)

As the United States and nations around the world struggle to blunt the effects of rising temperatures and extreme weather, sweeping assessments released Thursday by the White House, U.S. intelligence community and Pentagon conclude that climate change will exacerbate long-standing threats to global security.

Together, the reports show a deepening concern within the U.S. security establishment that the shifts unleashed by climate change can reshape U.S. strategic interests, offer new opportunities to rivals such as China, and increase instability in nuclear states such as North Korea and Pakistan. They come as world leaders prepare to gather in Glasgow next month for a set of crucial climate talks.

The new National Intelligence Estimate on climate, a first-of-its kind document by the Office of the Director of National Intelligence, builds on other grim warnings from national security officials about how a changing climate could upend societies and topple governments.

"We assess that climate change will increasingly exacerbate risks to U.S. national security interests as the physical impacts increase and geopolitical tensions mount about how to respond to the challenge," the document states. It also concludes that while momentum is growing to reduce global emissions of greenhouse gases, "current policies and pledges are insufficient" to meet the goals that countries laid out in the landmark Paris climate accord.

"Countries are arguing about who should act sooner and competing to control the growing clean energy transition," the estimate states.

The Pentagon's Defense Climate Risk Assessment takes a similar approach, but from a military perspective, examining how China and others could take advantage of rising seas and melting glaciers — and what the Pentagon needs to do to respond.

"Climate change touches most of what this department does, and this threat will continue to have worsening implications for U.S. national security," Defense Secretary Lloyd Austin said in a foreword to the Pentagon report.

The White House report on migration, which examines the way climate change is driving human movement around the world, notes that drought and other extreme weather can spark conflicts and forced displacement — and that countries such as China and Russia are poised to take advantage.

"Absent a robust strategy from the United States and Europe to address climate-related migration, the People's Republic of China (PRC), Russia, and other states could seek to gain influence by providing direct support to impacted countries grappling with political unrest related to migration," the White House report says.

The NIE concludes that geopolitical tensions are likely to rise over the coming decades as countries struggle to deal with the physical effects of climate change — which scientists say is already producing more devastating floods, fires and storms — as well as the political ones. Mitigating climate-related disasters may call for solutions that some countries can't afford and political will that some leaders can't muster.

The physical effects are likely to be most keenly felt in parts of the world already being reshaped — such as the Arctic — and in regions and countries that are particularly vulnerable because they experience extreme climate events, such as hurricanes or droughts, and because their governments aren't well-equipped to manage the fallout.

The estimate doesn't offer solutions for solving the climate crisis, but it serves to warn policymakers of the security implications of climate change, said a U.S. intelligence official who was involved in drafting the NIE and spoke on the condition of anonymity to preview its findings.

For instance, extreme weather could lead to droughts, which might cause people to leave their homes and cross national borders in search of water, which in turn could increase the potential for conflict.

"We have to think about the interdependency and complexity of these stories," the official said.

A NIE is a unique document in that it reflects the consensus view of all the U.S. intelligence agencies. Traditionally, they can take months to produce, and they present the most comprehensive analysis on significant national security concerns. The NIE released publicly is unclassified, but there is another classified version that will be provided to policymakers, officials said.

The report's warnings build on years of intelligence analysis that also painted a bleak picture. Just six months ago, in its quadrennial "Global Trends" report, the Office of the Director of National Intelligence forecast that climate change could spawn social upheaval and threaten political stability.

In one fictitious scenario, the authors imagined fisheries devastated by rising ocean temperatures and acidity, grain harvests depressed by changes in precipitation and rising food prices conspiring to trigger "widespread hoarding" that leads to a global famine — all by the early 2030s.

A wave of protest against "governments' inability to meet basic human needs" could bring down leaders and regimes, the report predicted.

In 2014, the National Intelligence Strategy warned that climate change could spark new wars over water and other vital resources that are likely to become more scarce.

The CIA also recently established a new center to address what it describes as transnational security threats, including climate change.

The Defense Department's assessment of the strategic shifts forced by climate change goes well beyond previous public analysis at the Pentagon, which has more typically focused on immediate challenges such as preparing U.S. bases for more frequent floods and rising sea levels.

"It looks at how the missions will be shaped by climate hazards in the years to come, which speaks to the strategic nature of the threat," said Erin Sikorsky, the director of the Center for Climate and Security and a former senior intelligence official focused on climate issues, of the new report.

Climate change and China "are interlinked" as a security issue, Sikorsky said.