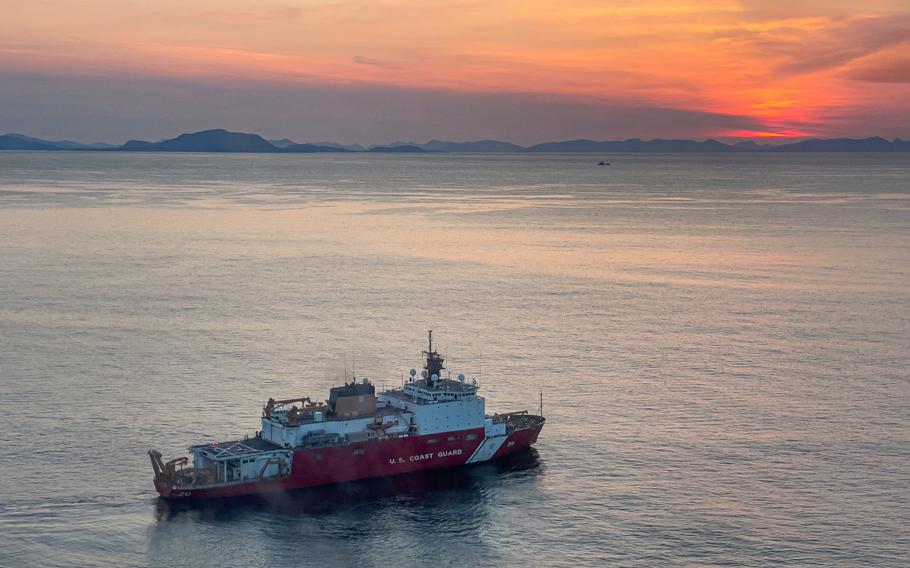 (Tribune News Service) — They call it "ice liberty," a tradition during the Coast Guard's maritime missions in Arctic waters. At a thick ice floe, the crew gets to disembark for a brief moment of freedom from the vessel confines. Some play touch football, or bring hockey gear for the occasion. Others just take a stroll.

This year, there was no suitable ice to be found during the Coast Guard Cutter Healy's northern journey off Alaska and Canada. So the event was canceled.

"A lot of the floes had melt ponds with holes in them like Swiss cheese," said Capt. Kenneth Boda, commander of the Seattle-based icebreaker. "We couldn't get the right floe."

Boda spoke via telephone during a port call in Boston. The vessel is deep into a marathon voyage that began July 10 as the 420-foot ship pulled away from its berth at the Coast Guard base in downtown Seattle and traveled into Arctic waters off Alaska. After a jog south, the Healy headed north again and through the Northwest Passage to the Atlantic.

This has been, in part, a training mission for the 85 crew members, a task that has added importance as the Coast Guard prepares to increase the U.S. Arctic presence with three new icebreakers that later in this decade are planned to be homeported in Seattle.

Some of the crew are as young as 18 and began this cruise fresh out of boot camp.

"The best way to train is just to get there and do it," Boda said. "To see where they started and where they are today is just amazing."

The vessel also hosted a rotating cast of scientists who conducted research in different parts of an Arctic maritime environment undergoing epic change as temperatures warm.

The Healy had made frequent forays to the Alaska Arctic, but this was the first time since 2005 the vessel has traversed the Northwest Passage, which consists of several different routes that — as sea ice has declined in recent decades — have become more accessible.

On Prince of Wales Strait, a narrow stretch of water separating two islands in Canada's Northwest Territories, Boda said stretches of shoreline had collapsed due to permafrost thaw. Boda said the crew was largely able to find open water rather than having to break ice.

"We were surprised at the condition of the ice," Boda said. "All the heavy stuff, we were able to maneuver around."

Scientists aboard the vessel included Larry Mayer, director of the Center for Coastal and Ocean Mapping at the University of New Hampshire, who has spent many years mapping the Arctic sea bottom.

He said the mapping this year in the Northwest Passage included a lot of shallow areas where the bottom had been scoured by icebergs over many decades. Further east, there were deeper canyons carved by glaciers that had since retreated.

Mayer said there was considerably more ice this year than in some years past, but that it was largely young ice, not the multiyear, thick floes that used to be a frequent sight during the summer cruises.

In another Arctic research cruise that ventured some 500 miles north of Alaska's northern shoreline, scientists also reported considerably more ice than in recent years. It was thicker and extended farther south.

This was not much by historical standards, but surprising in comparison to the recent steady decay of the ice pack," said Bernard Coakley, a University of Alaska Fairbanks geophysical scientist who was aboard the vessel Sikuliaq during a six-week Arctic trip that ended Sept. 30 in Nome.

This was Mayer's 10th cruise aboard the Healy, so he has a lot of experience on what can go right and wrong on the vessel. He said that morale was high this year, and galley food — which some years has been a disappointment — ranked as the best ever.

"It was really a treat. Nowadays, a science party often has vegans, and they always had a vegan option," he said.

Mayer and other scientists who had boarded in Seward, Alaska, got off the Healy when the ship reached Nuuk, a city of some 17,000 on the southwest coast of glacier-clad Greenland.

New arrivals included Robert Pickart, a scientist with the Woods Hole Oceanographic Institution who has been studying how warm water can get channeled through undersea troughs to accelerate melting in tide-water glaciers. He also studies what happens to Greenland glacier melt as it enters the sea.

The fate of Greenland's glaciers is a center-stage concern for climate scientists since their rate of melt will help determine how fast sea levels rise. And great quantities of glacial freshwater melt could cause a big slowdown or even collapse of an ocean current system — the Atlantic Meridional Overturning Circulation — that helps shape the earth's climate.

Pickart said he worked closely with the Healy's crew to position the ship in key locations in Baffin Bay, where in some areas the coastal waters were filled with hundreds of icebergs.

"It's really critical that we understand this (glacial melt) spread in high latitudes," Pickart said. "This is a big deal."

During the voyage, the Healy crew traversed some of the waters cruised more than a century ago by their vessel's namesake, "Hell Roaring" Mike Healy, captain of the wooden-hulled U.S. Revenue Cutter Bear from 1886 to 1895.

Healy, who was born into slavery, is a legendary figure in U.S. maritime history. He was the first person of African American descent to command a U.S. government ship, and embarked on annual patrols off Alaska, which covered 15,000 to 20,000 miles.

Healy was a kind of maritime sheriff who helped enforce the law as he acted as "judge, doctor and policeman to Alaska Natives, merchant seamen, and whaling crews," according to a U.S. Coast Guard history, and also led the Bear on a historic 1884 rescue of starving survivors of an Arctic expedition under command of Army 1st Lt. Adolphus Greely.

After Healy, who battled alcoholism, left the Bear, that vessel spent many more years on Arctic patrols, and later did duty in World War I and World War II. After decommissioning, the Bear sank at sea in 1963 while being towed from Nova Scotia to Philadelphia, where it was going to be turned into a dockside museum and restaurant.

The Bear's final resting place was a focus of decades of searches. In August, National Oceanic and Atmospheric Association Ocean Exploration, working with the Coast Guard, located and photographed a wreck that with "reasonable certainty" was the Bear, according to a statement released last week by NOAA.

Boda has a copy of a Healy biography. And on Sept. 22, Healy's birthday, he used the ship's loudspeaker to read a passage in commemoration of the ship's namesake.

By then, Boda had learned about the discovery of the Bear's sea-bottom wreck, which was identified with the help of photos taken by a remote-operated underwater vehicle that detailed special features, such as a specific pattern of steel staples on the bow.

By the time the Healy pulled into port in Boston last week, Coast Guard and NOAA officials had arranged for a formal announcement of the Bear's discovery by the docks, with the Healy serving as the backdrop.

After leaving Boston, the Healy returned to sea, headed for Baltimore en route to a Panama Canal passage and a final jog north up the West Coast to Seattle. The goal is to make it back by Nov. 20, shortly before Thanksgiving.