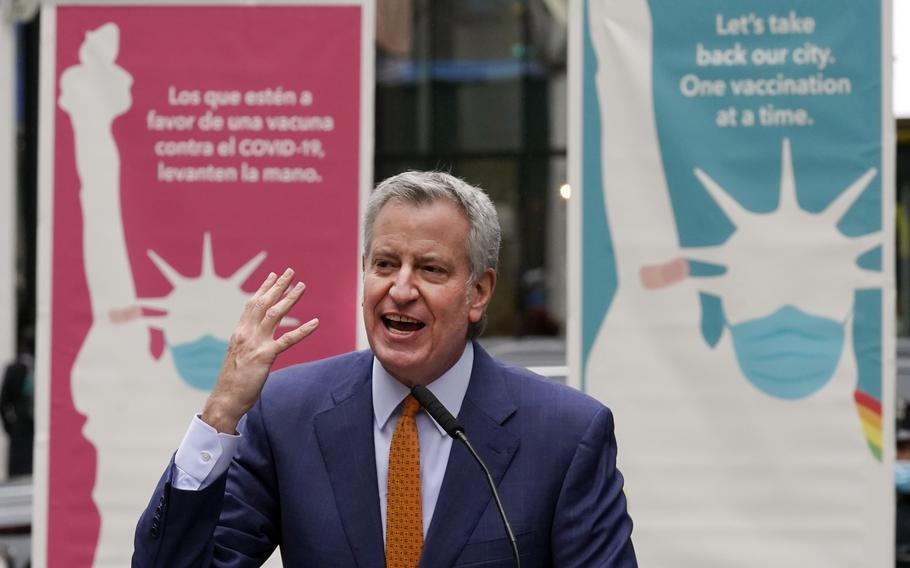 New York City will require police officers, firefighters and other municipal workers to be vaccinated against COVID-19 or be placed on unpaid leave, Mayor Bill de Blasio said Wednesday, Oct. 20, 2021, giving an ultimatum to public employees who’ve refused and ensuring a fight with some of the unions representing them. (Richard Drew/AP)

NEW YORK — New York City will require its entire municipal workforce to be vaccinated against COVID-19 or be placed on unpaid leave, Mayor Bill de Blasio said Wednesday, giving an ultimatum to public employees, including police officers and firefighters who have refused the shots and ensuring a fight with some unions representing them.

The Democrat gave approximately 46,000 unvaccinated city employees until Nov. 1 to get their first vaccine dose, and he offered an incentive: City workers who a shot by Oct. 29 at a city-run vaccination site will get an extra $500 in their paycheck.

Unions representing some city employees immediately castigated the mandates as an unfair invasion of personal privacy.

New York City's largest police union, the Police Benevolent Association, said getting vaccinated is a "personal medical decision" officers should make in consultation with their doctors.

"Now that the city has moved to unilaterally impose a mandate, we will proceed with legal action to protect our members' rights," said its president, Pat Lynch.

With the expanded mandate, more than 300,000 city employees will need to be vaccinated, roughly 160,000 more than had previously been covered by vaccination rules. Jailers on Rikers Island, where the city has been grappling with staffing shortages creating unsafe conditions, won't be subject to the mandate until Dec. 1.

De Blasio had been weighing a vaccine mandate for the police and fire departments and other city agencies for several weeks.

His announcement came amid new uproar over NYPD officers defying even simple measures, like wearing face masks. On Monday, two police officers were seen on video shoving a man out of a Manhattan subway station when he confronted them for flouting rules requiring they wear masks.

About 69% of the NYPD's workforce is vaccinated, compared with 77.4% of adult New Yorkers who have been fully vaccinated. The NYPD has about 34,500 uniformed personnel and about 17,700 people in non-uniformed support positions.

More than 60 NYPD employees have died of COVID-19. The fire department, whose EMTs and paramedics were working around the clock in the early days of the pandemic, lost 16 workers to the virus.

Police Commissioner Dermot Shea, who had COVID-19 in January, and Fire Commissioner Daniel Nigro have said they support a vaccine mandate. Shea told reporters earlier this month that given the "emergency situation that we're in, it makes sense." Nigro said at a fire department memorial service, "I think it's time."

New York City's mandate comes as other cities are starting to punish — and even fire — first responders who fail to meet vaccine requirements.

In Seattle, six police officers and 11 firefighters are slated for termination after that city's vaccine mandate took effect Monday. Another 93 Seattle officers and 66 firefighters were sidelined Tuesday while seeking religious or medical exemptions.

In Massachusetts, a police union said at least 150 state troopers are resigning over that state's mandate. In Washington State, as of Tuesday, 127 state troopers have been fired for defying a vaccine mandate and another 32 have resigned or retired rather than getting vaccinated.

In Chicago, where city workers are required to log their vaccine status, Mayor Lori Lightfoot last week accused the president of that city's police union of trying to "induce an insurrection" by encouraging officers to defy that requirement — even after the union's former president died of COVID-19. The dispute is now in court.

Under an executive order signed by de Blasio last month, NYPD officers have either had to be vaccinated or show proof of a negative COVID-19 test each week.

The state has mandated vaccines for health care workers and people in New York City must show proof of vaccination to eat indoors at restaurants or to attend sporting events — or even play in them.

One of the city's biggest basketball stars, Brooklyn Nets guard Kyrie Irving, has been banned from playing or practicing for refusing to get the vaccine. In barring the seven-time all star, the team cited New York City rules that pro athletes playing for a team in the city must be vaccinated against COVID-19 to play or practice in public venues.

He initially allowed public school teachers to get the vaccine or submit regular negative COVID-19 tests, but toughened the rule this summer by requiring all teachers to get a vaccine, with no test-out option.

Thousands of teachers and other school employees got the vaccine in the days before the deadline, city officials said.

Earlier this month, the Supreme Court denied a challenge to the teacher vaccine mandate, showing a potential legal pathway for expanding the requirement to other city agencies.