Maine citizens want a military base named for Joshua Chamberlain, not Confederates 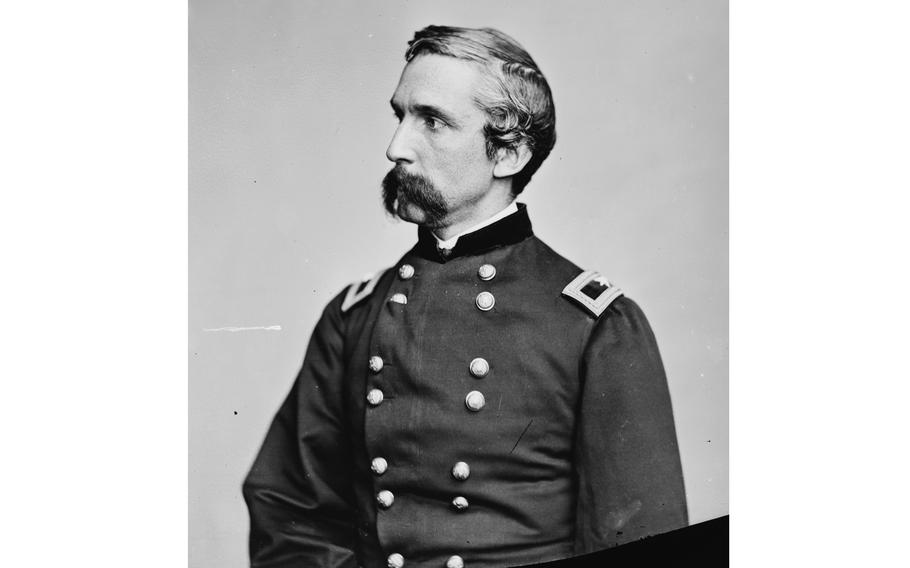 Col. Joshua Chamberlain won the Medal of Honor for his heroics during the Civil War and was elected governor of Maine four times. His home state boasts two statues in his likeness while Chamberlain’s old house is a beloved museum. (U.S. Army)

A mild-mannered Maine college professor leads a band of citizen soldiers in a desperate bayonet charge down a far-off rocky slope in July 1863. They sweep the enemy aside, save the day and help win the battle, thus preserving the Union.

In countless history books, novels, movies, plays, songs and television documentaries Col. Joshua Chamberlain and his 20th Maine Regiment are lauded as the heroes of Little Round Top and saviors at the Civil War battle of Gettysburg.

Chamberlain later won the Medal of Honor for his heroics and was elected governor of Maine four times. His home state boasts two statues in his likeness while Chamberlain’s old house is a beloved museum.

There’s also a village, beer and bridge named in his honor.

But there is no American military installation bearing Chamberlain’s name and some Mainers want to change that.

Last week, the executive director of the Pejepscot History Center, which runs the Chamberlain House Museum in Brunswick, asked her docent staff for suggestions in renaming an American military base in Chamberlain’s honor. With a federal group taking suggestions, it was a timely ask with a purpose

Picard asked them to also submit their ideas to the official federal base Naming Commission set up last year in a national rethink of Confederate statues and iconography following a summer of racial justice protests.

The commission was created as part of the United States National Defense Authorization Act for Fiscal Year 2021. The act requires the Secretary of Defense to “remove all names, symbols, displays, monuments, and paraphernalia that honor or commemorate the Confederate States of America or any person who served voluntarily with the Confederate States of America from all assets of the Department of Defense.”

President Donald Trump originally vetoed the act but his action was later overridden by Congress. The commission is taking base naming suggestions until the end of November and has three years to get its renaming work done.

“My vote is to change Fort Gordon to Fort Chamberlain,” wrote long-time docent Dean Clegg, who once raised thousands of dollars to get a historic marker put up in Virginia on the spot where Chamberlain was wounded.

Clegg thinks the name change would be appropriate, in part, because Chamberlain received Gordon’s surrender at the war’s end.

Over 30 years after the fact, Chamberlain told of seeing Gordon, mounted on horseback, leading his troops in a dreary column as they came to lay down their arms. In a show of class still remembered over a century later, Chamberlain ordered his own troops to salute. Gordon, seeing the honor, sat straight up, returning the gesture.

“On our part not a sound of trumpet more, nor roll of drum; not a cheer, nor word nor whisper of vain-glorying, nor motion of man standing again at the order,” Chamberlain wrote, “but an awed stillness rather, and breath-holding, as if it were the passing of the dead.”

Clegg also pointed out that Gordon was a slaveholder, was probably the leader of Georgia’s Ku Klux Klan and a vocal racist — all things Chamberlain was not.

“Aside from the treason of the Confederacy which he served, Pickett’s Charge at Gettysburg was a failure — the obverse of Col. Joshua L. Chamberlain’s notable victory leading the 20th Maine regiment over the 15th Alabama on Little Round Top the prior day,” Tenney, a retired history teacher, wrote.

Tenney also pointed out Chamberlain’s long record of public service after the war.

“He survived another 50 years as a noted servant of his state and community, a citizen soldier to the end of his life,” he wrote.

Picard said she was happy with the responses coming in from her email inquiry but the Pejepscot History Center isn’t advocating for any specific fort, just yet.

“But we’d love to see Chamberlain’s name on a federal military base, of course,” she said.