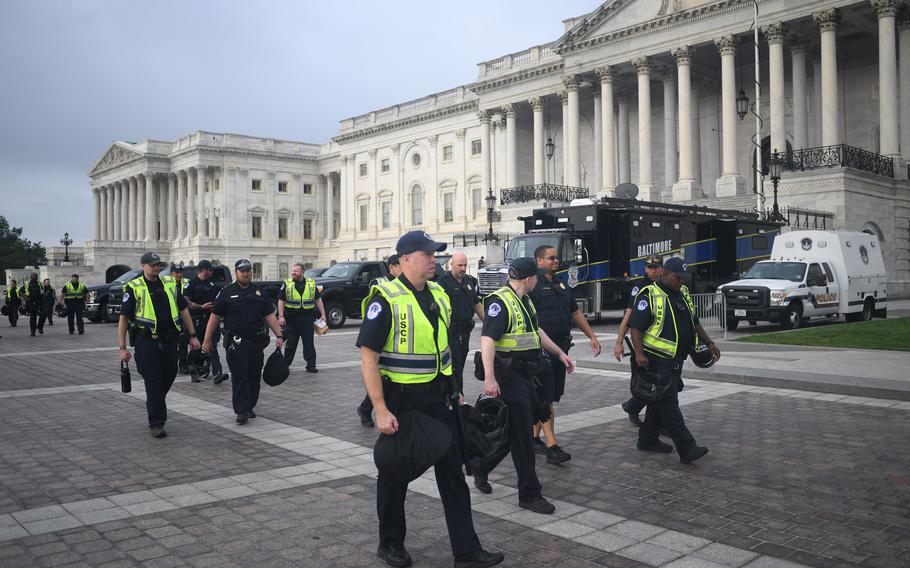 Capitol Police officers prepare for the “Justice for J6” rally in Washington on Sept. 18. (Astrid Riecken/For The Washington Post)

WASHINGTON — Local governments and the National Guard spent at least $792,500 to assist U.S. Capitol Police in its response to the Sept. 18 "Justice for J6" rally, a small right-wing rally supporting those arrested during the insurrection that prompted a massive law enforcement response and the reinstallation of the temporary Capitol perimeter fencing.

This is not the total cost to taxpayers as it does not include the response of Capitol Police, the head law enforcement agency that handled security Sept. 18, or the reinstallation of perimeter fencing. Instead, it mostly reflects the costs incurred by the D.C. police, estimated at $580,000, said Jenny Reed, the District's director of the Office of Budget and Performance Management.

Other D.C. agencies incurred costs as well, with the Department of Public Works spending about $19,700 and the District Department of Transportation spending a "pretty marginal" amount, Reed said, noting that some other city agencies have yet to tally their costs. Police forces from around the area also were asked to pitch in, with officers from Northern Virginia and Maryland suburbs responding. Washington D.C.'s and Alexandria's police and sheriff's offices said they would seek reimbursement from the federal government.

Agencies in and around the nation's capital are accustomed to responding to protests and demonstrations for a variety of causes. But the Sept. 18. rally, which was held on federal land near the U.S. Capitol, prompted significant media attention and a heightened security response because it was held in support of those charged in the Jan. 6 insurrection. Organizers had insisted the rally would be peaceful and ultimately, on the day of the rally, the protesters were outnumbered by journalists, police officers and counterprotesters.

Capitol Police said on Sept. 18 that between 400 and 450 people were observed within the protest zone; however, many of those were journalists and bystanders.

D.C. police had planned for the rally, asking the entire force of more than 3,500 members to work on both Sept. 17 and 18. This meant most of those officers did not receive overtime pay and instead were scheduled for alternative days off, said Kristen Metzger, a spokesperson for the department.

"MPD was out there, we were fully activated, and we recognize the rights of all those who come here to exercise their First Amendment rights," Metzger said of the rally. "I think we accomplished that that day. We kept safety for everybody who attended or visited or was in the area. It was nothing like January 6 again."

It is difficult to compare the costs incurred by the government for demonstrations or protests in Washington, which involve varying crowd sizes in different areas and frequently include responses from multiple local and federal departments. In some instances, authorities increase their response, citing concerns about potential unrest or clashes.

The city's bill is far less than the $2.6 million estimate for the 2018 "Unite the Right 2" white-supremacist rally, held a year after neo-Nazis, Ku Klux Klan members and other far-right demonstrators gathered in Charlottesville for a violent rally that led to the death of Heather Heyer, a 32-year-old counterprotester. The 2018 rally attracted fewer than 40 supporters.

Capitol Police have not yet determined the final cost of the response to the Sept. 18 rally but will release this information once it is finalized, which is expected to occur around December, a spokesperson said.

Capitol Police leaders, specifically, had been criticized for inadequate security Jan. 6, when a violent pro-Trump mob stormed the Capitol, disrupting Congress during the certification of President Joe Biden's election victory. After being caught flat-footed at the Capitol just over eight months prior, officials erred on the side of overpreparation for the Sept. 18 rally.

"What we do know is the chatter we heard before January 6, the threats turned out to be credible," Capitol Police Chief J. Thomas Manger said at a news conference Sept. 17. "So we're not taking any chances."

Congress budgeted $23 million in the 2020 fiscal year, which began Oct. 1, 2019, and lasted through Sept. 30, 2020, for a fund to help the District pay for responses to large-scale protests and events, according to data provided by the city. The District spent $61 million during this time, which included the historic racial justice protests that followed the murder of George Floyd by Minneapolis police.

In the 2021 fiscal year, which included the Sept. 18 rally, the federal government budgeted an estimated $55 million. However, Olivia Dedner, a spokeswoman for the Office of the City Administrator, noted that this did not take into account the more than $35 million deficit in the previous fiscal year, for which she said the city has not been reimbursed.

Other departments did not immediately provide this information. In response to a records request, Fairfax County estimated it will cost The Washington Post nearly $300 to receive information about the costs associated with both the Sept. 18 rally and the Jan. 6 insurrection. The department is now gathering any responsive materials.

Arlington County Police did not provide an estimate to The Post, stating in a response to a public records request that the reimbursement record for the "Justice for J6" rally "has not been created." The Post has submitted records requests to receive similar information from Montgomery County police and U.S. Park Police.

Patricia McCabe, the U.S. Supreme Court spokesperson, declined to provide information about law enforcement and security response to the Sept. 18 demonstration, stating: "We don't discuss security as a matter of Court policy." The Architect of the Capitol did not respond to multiple requests for comment regarding the costs of reinstalling the temporary perimeter fencing ahead of the rally.

The Washington Post's Peter Hermann contributed to this report.