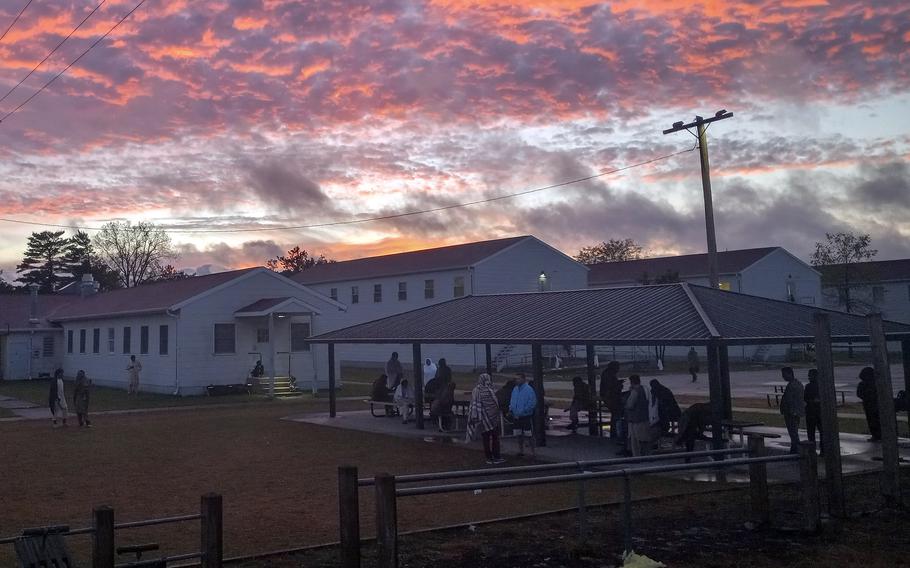 Buy Photo
Afghan evacuees gather to talk Sept. 24, 2021, as the sun sets over Fort McCoy, Wis., where they are waiting to be resettled. (Zubair Babakarkhail/Stars and Stripes)

After driving three hours through the dark from her home in central Illinois to Crown Point, Indiana, she picked up more items from another veteran, then turned around and drove 5½ hours to Fort McCoy military base in western Wisconsin.

There, she’d meet an Afghan friend, Waheed, who worked as a U.S. Army interpreter alongside Henderson in Afghanistan from 2002 to 2005.

Henderson gave her truckload full of supplies to Waheed, his wife and their five children, along with seven other families who are friends of the family. She also gave some items to the medical center on the base and to some other Afghan interpreters who could help get the clothing and supplies to some of the roughly 13,000 Afghan refugees at the base most in need.

“We owe it to these people to get them the things that they need,” Henderson said. “They have fought alongside us. They have put their lives on the line.”

But a new policy bars Henderson or any other individual from bringing any further donations onto the base to help families.

The order, which went into effect Sept. 24, prohibits people from entering Fort McCoy and handing out clothing, supplies and other items of value to Afghan evacuees in person. Instead, such donations must now go through official channels. But some say that process still isn’t working fast enough, leaving the Afghans with limited access to basic necessities.

Under the new policy, only those on official business can enter the Afghan neighborhoods at the base. Those who violate the rule could face criminal charges or be banned from Fort McCoy.

“So I can go up, and I can visit with them,” Henderson said. “(But) if I were to give them any clothing or any money or any food ... I could be arrested and barred from post.”

Military personnel can get an exception to the order, but it has to get approved by officials. Henderson said her request for an exception is in progress.

“It’s one more person that’s properly clothed and taken care of,” Henderson said of her effort to provide direct relief for Waheed’s family. “So what’s the problem? How is that a bad thing?”

The goal of the order, officials say, is to cut down on backdoor donations, which can cause problems.

“The policy was established to protect both the Afghans and the soldiers who are supporting Operation Allies Welcome,” a spokesperson who insisted on anonymity said in an email. “This policy mitigates entry of contraband, such as drugs and weapons from entering the base. ... Another reason is to prevent perceptions of inequities among the Afghan population and could breed resentment.”

The spokesperson said soldiers are put in an “awkward position” when asked to purchase food, clothing or other items for Afghans, and it’s unfair for some to have access to extra supplies while others don’t.

Friends can still send items to specific Afghan individuals, but they need to be mailed. That allows personnel to have security protocols in place and “avoid the perception of favoritism in the community,” the Operation Allies Welcome spokesperson said.

Henderson said mailing supplies wouldn’t work for some of the bigger items she’s brought in, such as the wagons and plastic bins full of clothing.

She also said the process for distributing clothes is already unfair because the 12,600 Afghans can’t all get clothes at once. For instance, on Sept. 30, the nonprofit organization Team Rubicon said, roughly 4,500 winter coats had been distributed, leaving the other 8,100 Afghans to wait until they get a chance to get into the distribution center.

“They’re creating favoritism,” Henderson said. “Why can’t I pick up their slack?”

Henderson said the clothes she has brought for Waheed, his family and their friends have resulted in 40 fewer people having to wait to get clothes from the distribution center.

Waheed, who asked to be identified by only his first name to protect family members still in Afghanistan, said he most recently worked within the Afghanistan government, making him a target. Waheed said if the Taliban had found him, they would have killed him because of his role helping the U.S.

“Waheed is an amazing person,” Henderson said. “I am alive today because of him.”

Although all Afghans on base have now gotten a chance to go through the distribution center, it took more than a month to accomplish that. Just last week, more than 1,200 evacuees still had not received a new set of clothes from the center.

And not everyone who goes through the clothing distribution center can find what they’re looking for because of limited sizes, a somewhat unorganized setup and time constraints, Henderson said.

The center has dozens of large cardboard boxes filled with clothes of many sizes. On Sept. 30, women and children dug through the boxes, holding up various clothing items to gauge whether they would fit. Shelves with around 100 shoes lined a corner of the warehouse.

Lt. Col. Robert McTighe said each evacuee gets about 30 minutes to choose 10 to 15 items for themselves, but Waheed said for him it was more like 10 minutes. Waheed said he couldn’t find clothes or shoes in his size, and then his time was up.

A 27-year-old Afghan woman, who plans to go to college in the U.S. and asked to remain anonymous because her family is still in Afghanistan, said she got 15 to 20 minutes in the center and didn’t have time to find clothes.

“Most of my time, I just spent on selecting the shoes,” the woman said. “I couldn’t take much from there. ... The time was short.”

McTighe said last week that most people have been able to find the sizes they need, “give or take a size,” but acknowledged that some of the donated clothes have been too big.

Fort McCoy is currently seeking donations of new toddler clothing, the Operation Allies Welcome spokesperson said. People can purchase items on Amazon and ship them to Fort McCoy, or drop them off at any of four Salvation Army locations in Madison, Milwaukee, La Crosse and Wausau that are collecting donations for the Afghans.

Both Waheed and the 27-year-old woman say they have been able to receive fresh clothes in their correct sizes only because of friends on the outside.

Henderson is not alone in bringing donations directly into the hands of Afghan families to sidestep Fort McCoy’s weeks-long distribution process.

One volunteer, who asked not to be identified because officials have discouraged volunteers from speaking to the press, said she brought several phone chargers for the evacuees in early September. She said others who brought toys in person were surrounded by a crowd of people. Henderson said she also brought 69 cans of baby formula when that was in short supply.

A friend of the 27-year-old woman said she arranged for clothes to be dropped off for a group of young women who came to the U.S. to continue their education. The friend also spoke on the condition of anonymity because she doesn’t want to potentially reveal the identities of the Afghan women she is helping.

Fort McCoy spokesperson Cheryl Phillips said on Sept. 30 that some of the Afghans have money they’ve used to buy things from the retail store on base. Fort McCoy is not providing Afghans with cash, so it’s possible some are getting money from friends or brought money with them from Afghanistan.

Waheed said he had a house in Kabul and thousands in savings, but he’s lost it all. The Taliban has frozen his bank account, he said, and he’s lost about $10,000 in cash in the chaos at the Kabul airport.

“I don’t have one dollar in my pocket to get my sons to the PX and purchase for their necessities,” Waheed said.

But Waheed’s not angry about the conditions at Fort McCoy. He said he would like warm clothes for his family and the opportunity to have his children go to school if they end up staying at Fort McCoy for a long time. But he said the most important thing is his family’s safety, and he appreciates the help he’s gotten from Americans in ensuring their survival.

“If they give us nothing, we are very happy because right now we are feeling very safe with my family,” Waheed said. “The wagon that Miss Ilene gave to us, I put my son in it and walked for about 50 meters, down the street and walked, breathing fresh air and feeling very safe.”

“I hope one day I will be useful once again for (the) U.S. government.”

New or gently used, freshly laundered clothing donations for Afghan evacuees at Fort McCoy can be dropped off at four Salvation Army locations in Wisconsin:

Monetary donations, which are preferable because they allow officials to adapt to changing needs, can be made online or through the mail:

—To donate to the group sorting and organizing the clothing donations, go to: go.madison.com/team-rubicon

Corporations interested in donating or offering services, such as housing or legal assistance, can fill out this form: go.madison.com/corporate.