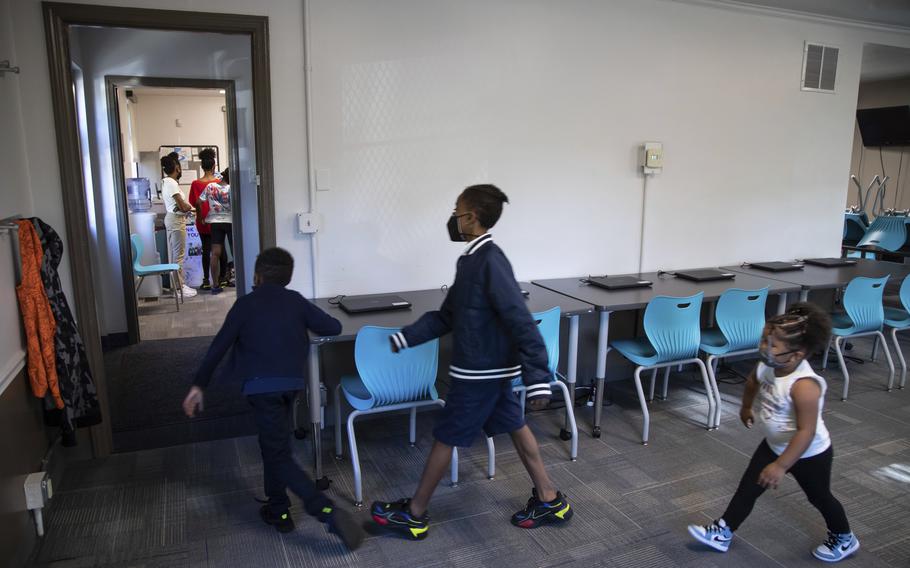 In this Oct. 1, 2021, photo, Zihare Wellons, 7, from left, Shahif Wellons, 12, and Janiyah Acie, 3, walk through new Rec2Tech space at Jefferson Recreation Center, which will provide access to technology and innovative programming for community members including STEM, computer science and coding education, combined with the arts in Pittsburgh. (Rebecca Droke/AP)

As Congress considered a massive COVID-19 relief package earlier this year, hundreds of mayors from across the U.S. pleaded for “immediate action” on billions of dollars targeted to shore up their finances and revive their communities.

Now that they’ve received it, local officials are taking their time before actually spending the windfall.

As of this summer, a majority of large cities and states hadn’t spent a penny from the American Rescue Plan championed by Democrats and President Joe Biden, according to an Associated Press review of the first financial reports due under the law. States had spent just 2.5% of their initial allotment, and large cities spent 8.5%, according to the AP analysis.

Many state and local governments reported they were still working on plans for their share of the $350 billion, which can be spent on a wide array of programs.

Though Biden signed the law in March, the Treasury Department didn’t release the money and spending guidelines until May. By then, some state legislatures already had wrapped up their budget work for the next year, leaving governors with no authority to spend the new money. Some states waited several more months to ask the federal government for their share.

Cities sometimes delayed decisions while soliciting suggestions from the public. And some government officials — still trying to figure out how to spend previous rounds of federal pandemic aid — simply didn’t see an urgent need for the additional cash.

“It’s a lot of money that’s been put out there. I think it’s a good sign that it hasn’t been frivolously spent,” Louisville Mayor Greg Fischer said. He was president of the U.S. Conference of Mayors when more than 400 mayors signed a letter urging Congress to quickly pass Biden’s plan.

The law gives states until the end of 2024 to make spending commitments and the end of 2026 to spend the money. Any money not obligated or spent by those dates must be returned to the federal government.

The Biden administration said it isn’t concerned about the early pace of the initiative. The aid to governments is intended both “to address any crisis needs” and to provide “longer-term fire power to ensure a durable and equitable recovery,” said Gene Sperling, White House American Rescue Plan coordinator.

“The fact that you can spread your spending out is a feature, not a bug, of the program. It is by design,” Sperling told the AP.

The Treasury Department set an aggressive reporting schedule to try to prod local planning. It required states, counties and cities with estimated populations of at least 250,000 to file reports by Aug. 31 detailing their spending as of the previous month as well as future plans.

More than half the states and nearly two-thirds of the roughly 90 largest cities reported no initial spending. The governments reported future plans for about 40% of their total funds. The AP did not gather reports from counties because of the large number of them.

To promote transparency, the Treasury Department also required governments to post the reports on a “prominent public-facing website,” such as their home page or a general coronavirus response site. But the AP found that many governments ignored that directive, instead tucking the documents behind numerous navigational steps. Idaho and Nebraska had not posted their reports online when contacted by the AP. Neither had some cities.

Officials in Jersey City, New Jersey, required the AP to file a formal open-records request to get its report, though that shouldn’t have been necessary. City employees in Laredo, Texas, and Sacramento, California, also initially directed the AP to file open-records requests. Laredo later told the AP it had spent nothing. Sacramento relented and eventually provided a short report stating it had spent nothing but might put its entire $112 million allocation toward replacing lost revenue and providing government services.

Among states, the largest share of initial spending went toward shoring up unemployment insurance trust funds that were depleted during the pandemic. Arizona reported pouring nearly $759 million into its unemployment account, New Mexico nearly $657 million and Kentucky almost $506 million.

For large cities, the most common use of the money was to replenish their diminished revenue and fund government services. San Francisco reported using its entire initial allotment of $312 million for that purpose.

Those reporting no initial spending included Pittsburgh, whose mayor joined with several other Pennsylvania mayors in February on a column urging Congress to pass “crucial” aid for state and local governments.

“Congress must act, and they must act soon. Our communities cannot wait another day,” the Pennsylvania mayors wrote.

Pittsburgh ultimately ended up waiting to spend the money until the Treasury guidelines were released, community members had a chance to comment and the City Council could sign off on the spending plans. In the future, the city plans to use part of its federal windfall to buy 78 electric vehicles, build technology labs at recreation centers and launch a pilot project paying 100 low-income Black women $500 a month for two years to test the merits of a guaranteed income program.

“Even though the money hadn’t technically been expended” by the Treasury Department’s reporting timeline, “the receipt of the money was enough for us to hold off on major layoffs,” said Dan Gilman, chief of staff to Pittsburgh Mayor William Peduto.

Some officials are intentionally taking their time.

Parson’s budget director said the administration will present more ideas to lawmakers when they convene for their regular session in January. Until then, the state should have enough money left from a previous federal relief law to cover the costs of fighting the virus, budget director Dan Haug said.

“We want to try to find things that are going to benefit Missouri not just next year or the year after, but 10 or 20 years down the road,” Haug said. “That takes some thought and some planning.”

“To the extent that we spend these dollars, we are participating in an ever-increasing federal debt or bad monetary policy,” Richey said.

Missouri was one several states that waited to request its initial allotment. Five other Republican-led states — Oklahoma, South Carolina, South Dakota, Tennessee and Texas — waited so long that they weren’t required to file reports by the Treasury’s Aug. 31 deadline.

Tennessee wanted to make sure small cities were prepared for a 30-day clock that starts ticking for them to seek funding once the dollars arrive at the state, said Lola Potter, a spokesperson for the state Department of Finance and Administration. A South Dakota official cited similar reasoning for the delay. Financial Systems Director Colin Keeler said it’s difficult for small towns to take the steps needed to apply.

“The state was in no rush at all,” he said. “The cities wanted to get theirs, but we needed to be prepared.”