Restaurants’ fragile recovery is fizzling in the US 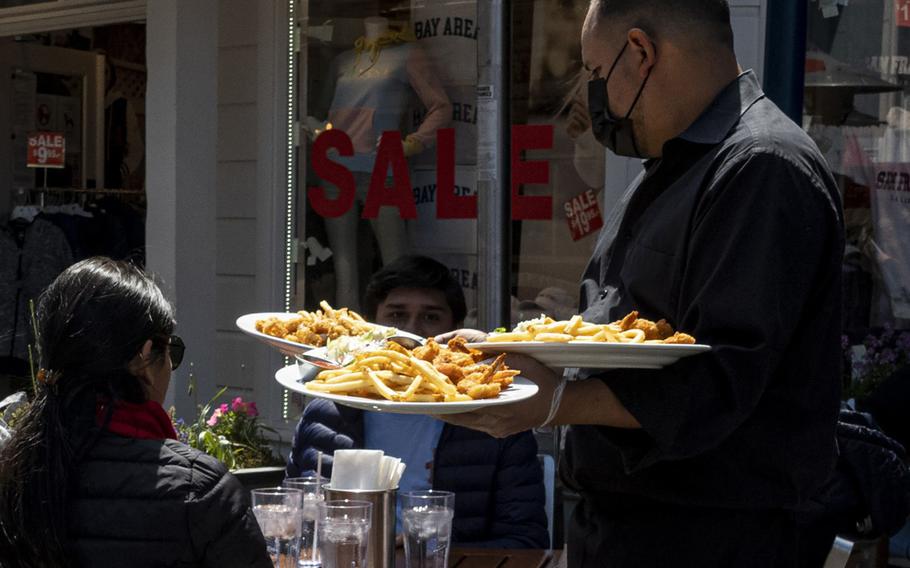 A worker serves food at a restaurant on Pier 39 in San Francisco. (David Paul Morris/Bloomberg)

After a brief glimpse of normalcy this summer, the fragile recovery in the U.S. restaurant industry is sputtering.

Data and interviews with restaurateurs point to a deterioration in finances due to surging costs for everything from salmon to uniforms and labor shortages. A survey found that 51% of small restaurants in the country couldn’t pay their rent in September, up from 40% in July.

Unlike during most of 2020, today’s struggles aren’t visible with the naked eye: Customers are still flocking to eateries, for the most part, in spite of rising prices and lingering fears of the delta coronavirus variant. But the anxiety over mounting expenses is palpable among restaurant owners from New York City to Nashville, Tenn.

“You might see a restaurant that’s doing well on a Friday night, but that doesn’t at all tell the story of how they’re doing. Probably not good,” said Daisuke Utagawa, a Washington, D.C., chef whose restaurants include Haikan and Daikaya. “For us, personally, we haven’t seen any sort of recovery. We are still underwater.”

The industry is raising the alarm. Its main lobbying group last week called on Congress for more aid to help meet payroll and pay down debt, citing a survey showing that a majority of restaurant operators have seen business conditions deteriorate in the past three months. Like many companies around the world, food-service firms are also hit by supply-chain bottlenecks.

Underscoring the surge in expenses, a closely watched price gauge hit its highest since 1991 in August, driven by energy and food, the Commerce Department said Friday.

“Our kitchen labor costs are up 20%, maybe more,” said Jeff Katz, partner at Crown Shy and Saga in New York City. “The question is, how much more can the customer handle. We haven’t raised our prices yet, but these costs are real.”

The rebound has been shaky and uneven across the country, even for national chains.

Darden Restaurants Inc., which has about 870 Olive Garden locations, said last week that sales bounced back slightly in September after falling off in August. Georgia and Florida have seen pressure from the delta variant in recent weeks, Chief Executive Officer Gene Lee said on a conference call. But California locations are getting better.

Large public-traded companies including Chipotle Mexican Grill and McDonald’s are scheduled to report quarterly earnings in October. While the recovery in fast food has been stronger, with brisk sales via drive-thru and takeout options, costs and the lack of workers are eating into profitability.

Heading into the winter with COVID-19 still spreading in parts of the U.S., some customers may be more wary to patronize indoor venues. But one of the biggest concerns on restaurateurs’ minds today is the dearth of cooks and waiters, many of whom are unwilling to come back to the industry in spite of higher wages.

Many restaurateurs have raised menu prices, and consumers are starting to notice. Almost two-thirds of customers say they’re either ordering less or visiting restaurants less often due to price increases, according to an August survey by Bluedot, a location-based software company.

Still, nationwide sales have remained brisk since the economy reopened and Americans, many of them vaccinated and flush with savings racked up during long months of isolation, flocked back to eateries and pubs.

Spending at quick- and full-service restaurants is up 7% compared with 2019, according to data from dining-loyalty program Rewards Network. The number of customers is down, however, meaning part of the gain in dollars is due to higher menu prices.

NoHo Hospitality co-founder Andrew Carmellini is seeing high demand at his restaurants in New York City, Baltimore, Detroit and Nashville. At Carne Mare in Manhattan, he has raised steak prices by 15%.

“Everything is costing more, especially in the luxury food category, but customers are paying the price,” Carmellini said.

For how long remains the question. At a casual seafood place such as Abrams’s Mermaid Inn, the unofficial ceiling for entrees is $30. Beyond that, the place loses customers, he said. And yet the price of salmon has doubled, killing margins.

“It’s going to be touch and go for us, we’re planning for another fall and winter of uncertainty,” Abrams said. “ We are by no means out of the woods.”