Back in the classroom, teachers are finding pandemic tech has changed their jobs forever 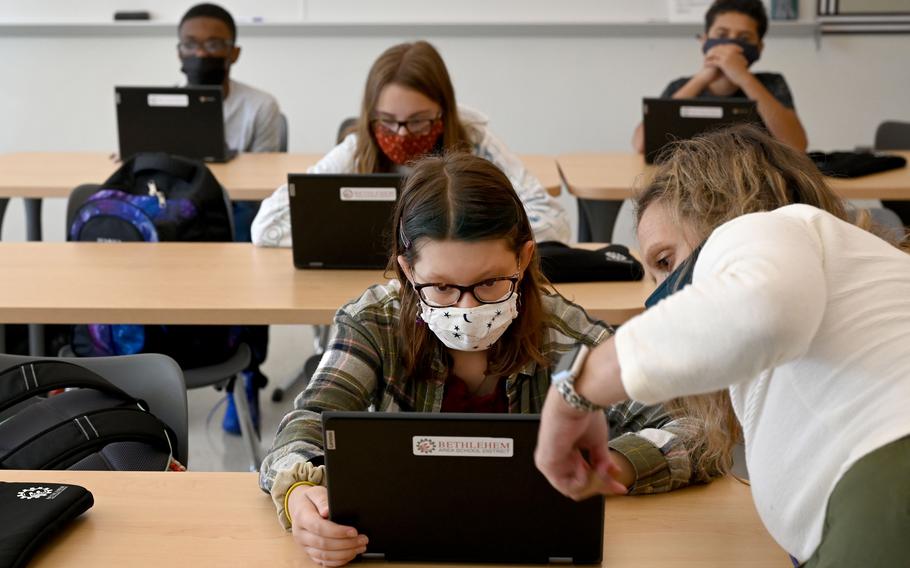 MaryRita Watson says her job as a fourth- and fifth-grade reading specialist is 110% more stressful these days.

As the delta variant continues to spread across the United States and leads to more coronavirus exposure among students, Watson says she has been forced to embrace the hybrid model of teaching, where she simultaneously has to educate students both in person and virtually.

“It’s difficult. I feel like the students who are at home aren’t getting the best of me, and then at times, the students at school aren’t getting best of me,” says Watson, who teaches at Oakbrook Elementary School in Summerville, S.C. She has switched between in-person and virtual classes over the last year and half due to the pandemic.

Watson is among millions of teachers across the nation who are in their second year of teaching either in person, online or both — depending on the state, city and district they live in. Like many other professions, teachers’ jobs have become increasingly complex due to the pandemic. This year, many students are back in the classroom, but teachers have to constantly adapt if there is virus exposure. There aren’t specific guidelines on how best to teach students using the many technologies that are available. Teachers are also struggling to keep students engaged while learning new tech tools that are required to make online classes successful.

“Teachers have been doing heroic things to keep kids learning during the pandemic,” Sal Khan, founder of online education platform Khan Academy said in a Washington Post Live interview. “They’ve been thrown into the deep end of the pool with the technology and it’s been difficult.”

Still, the pandemic has also made virtual learning tools and classes less of a lift for students, teachers and parents who want to consider the option, he said, and a lot more schools are talking about the need to personalize education for students with online tutoring and other tools.

During the pandemic, some teachers have created YouTube videos that students can watch when they need help with a lesson. They’re using Google Forms to give students a quick and easy way to submit assignments. Others are using Whiteboard. Fi, which gives students individual digital whiteboards, game website Math Playground for math competitions, and online learning tool Quizlet to make custom sets of virtual flash cards.

Teachers also are learning how best to use the capabilities within video software Google Meet, WebEx and Zoom — which they use to host classes — to make lessons more interactive. For example, small virtual breakout groups help keep students engaged. Reactions and chat functions get more students involved without the pressure of having to speak in front of an entire class.

Roberta McGuire, a Fayette County teacher in West Virginia who has taught for 37 years, said the pandemic has forced her to quickly understand the learning styles of her students since she can’t see them in person. McGuire said that in-person, she could quickly pick up on whether students were more visual or whether they learned better through instructions. Now that she’s teaching virtually, she has her students read to her over video so she can get a better sense of their reading levels. She also has to educate some students and parents on the tech — sometimes even the most basic digital tools.

“I’ve been teaching parents how to copy and paste, how to upload a document, how to do things with email,” she said. “Those things are a challenge, and you have to have patience.”

As online teaching continues, the American Federation of Teachers, a labor union that represents more than 1.7 million professionals including teachers and school-related personnel, said it’s worried about the possible lack of resources for teachers that ultimately could make online learning less effective than in-person classes. The union says educators need access to professional development focused on remote teaching and advises against “ineffective strategies” like hybrid teaching. It also worries about hurdles for students in a virtual environment.

“It means working to bridge the digital divide for students through heavy investment in devices and broadband,” said AFT President Randi Weingarten.

Some teachers have more resources than others to be prepared for a long-term virtual teaching environment. At Mesa Virtual Campus — which opened last year as a part of Mesa Public Schools in Mesa, Ariz. — teachers were given standard operating procedures for a virtual environment over the summer and have been offered training on digital tools for student engagement. They’re also finding ways to make the virtual classroom more interactive.

“Something very simple that I do is say, ‘Type the answer in the chat, but don’t hit enter until I say waterfall,’ “ says Heather Gookin, a sixth-grade teacher at Mesa. “Then I say ‘waterfall!’ and ‘OK, scroll up and see if anyone has the same answer as you.’ “

Jennifer Echols, director of online and personalized learning at the largest school district in Arizona, Mesa Public Schools, said enrollment in virtual school continues to rise due to safety, flexibility and preference. It has about 70 full and part-time teachers who are able to teach virtually from a repurposed elementary school two days a week. The campus serves about 1,050 students full time and has been on a hiring spree for teachers.

But despite the massive amount of preparation, hiring and strategizing that went into opening the new virtual school, educators there still face common challenges. Namely, teachers are tasked with making sure students who join a virtual class are actually paying attention and engaged versus keeping their cameras off and playing Xbox.

“Sometimes, students are very upfront that this is not a learning model they chose for themselves but one their parents chose,” Echols says. “So they’re not happy.”

Rebecca Jordan, a teacher at the virtual learning program at Austin Independent School District in Texas, says keeping first-graders interested and engaged online is a challenge. She uses some traditional teaching methods to mix with the video-hosted class, such as a camera to project a basic whiteboard on which she writes to the students over video. They are then asked to mirror her work and physically hold up their boards to their computer cameras to show her.

With younger students, she says she found it best to stay away from using longer videos for instruction.

“They want to be with their teachers and talk to them.”

Keeping students on task isn’t the only problem. Sometimes it’s access to the tech itself.

Anita Carson, a sixth-grade science teacher at Lake Alfred Polytech Academy in Lake Alfred, Fla., says many students in the school’s county don’t have access to the internet because service doesn’t exist in their neighborhoods or their families can’t afford it. Others don’t have the proper devices to complete their schoolwork. Last year, the school was able to loan devices and hotspots to help those students get online. But this year, schools aren’t able to get proper equipment out to quarantined students before they come back 10 days later.

On top of that, students are also suffering the emotional toll of losing teachers who have died of the virus. Carson counts 16 educators and staff members who died in her county since school started in August.

Still, the continued demand for online classes has made one thing clear: Virtual learning is much more than a stopgap solution during the pandemic, educators say. And it’s an alternative way to learn that many families are finding they prefer.

“The biggest challenge is we need more staff,” said Kimberly Solomon, a second-grade teacher at Baltimore Public Schools’ virtual learning program, which has an enrollment of 200 second-graders alone. “It appears to be what parents want. “