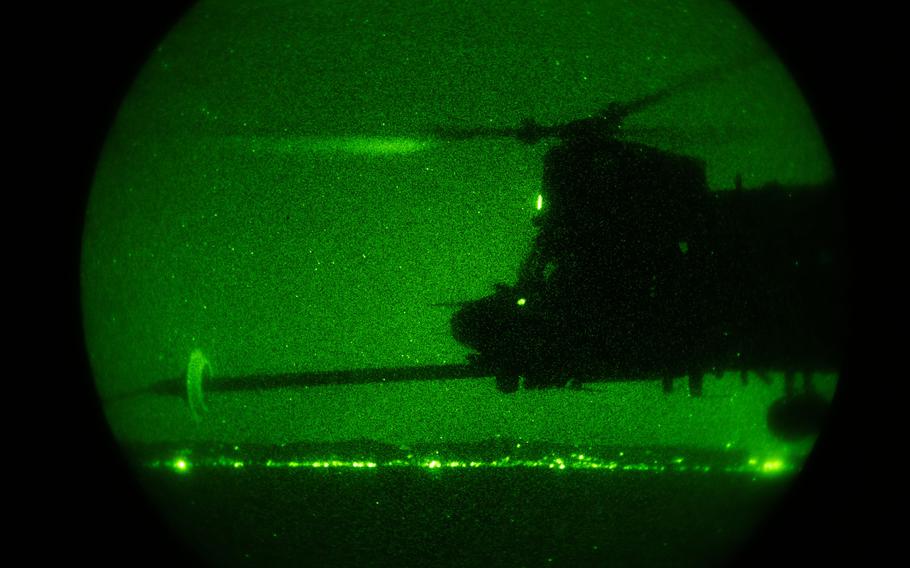 An MH-47G Chinook assigned to the 160th Special Operations Aviation Regiment refuels at Naval Air Station North Island, Calif., in 2019. Soldiers who may have been members of the 160th SOAR were attacked Sept. 18, 2021, by a sword-wielding man dressed as a ninja while they were training at Inyokern Airport, about 100 miles north of Los Angeles. (Daniel Snider/U.S. Air Force)

A sword-wielding man dressed as a ninja attacked several special operations soldiers who were training at a California airport, reportedly forcing them to shelter in a hangar and inflicting wounds that required stitches.

The bizarre assault took place at Inyokern Airport, an airfield in the Mojave Desert about 100 miles north of Los Angeles, sometime after 1 a.m. on Sept. 18, according to what appears to be a military incident report shared on Instagram and Reddit.

Records from the Ridgecrest Police Department seem to confirm some details in the document posted to social media in a photo late Wednesday that said two soldiers had to receive stitches before returning to duty.

After confirming that the incident described in the document leaked on social media did occur, U.S. Army Special Operations Aviation Command spokesman Maj. Jeff Slinker said officials did not have any further information to add.

The soldiers’ names were redacted in the photo shared on social media — but one was identified as a staff sergeant and the other as a captain. The details suggest that they are members of the 160th Special Operations Aviation Regiment, an elite helicopter unit known as the Night Stalkers.

The staff sergeant was sitting outside the administration building at the airport hangar smoking a cigarette when he was approached by “an unknown person wearing full ninja garb,” the photographed document states. 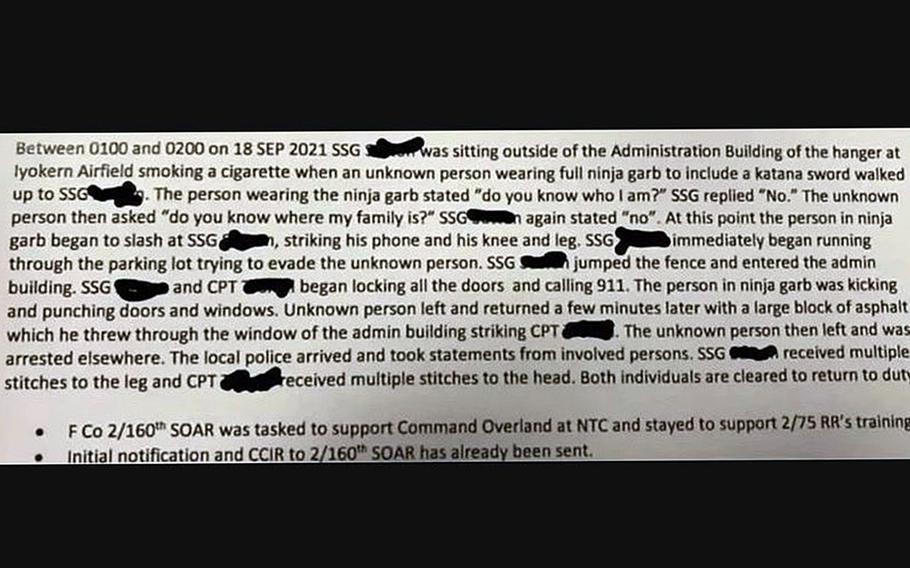 A screenshot of what appears to be a military incident report shared on Reddit describes an attack on a group of soldiers Sept. 18, 2021, in California by a sword-wielding man dressed as a ninja. (Reddit)

It is unclear from the records whether the man was an actual practitioner of ninjutsu.

“Do you know who I am?” the ninja asked, to which the soldier replied no, according to the document.

“Do you know where my family is?” the black-clad man then asked. The staff sergeant again answered no.

“The person in ninja garb began to slash at (the soldier), striking his phone and his knee and leg,” the record states.

The staff sergeant took off running across the parking lot to escape the attacker, and then he jumped a fence and entered the administrative building, where he and the captain locked doors and called 911.

Meanwhile, the man dressed as a ninja was “kicking and punching doors and windows” before leaving to grab a large block of asphalt, which he heaved through the window of the administration building.

The captain was struck by the chunk of asphalt, said the document on social media.

The first assistance call was recorded about 1:20 a.m., the Ridgecrest Police Department log shows. A man “with a sword” was in a parking lot, and there was at least one victim, the log states.

About 30 minutes later came a second call via 911: “26 spec op military members doing training at the airport,” the log states. “Hunkered down in a hangar wondering where help is.”

The ninja fled and was arrested elsewhere, according to the document shared on social media.

It indicates that the soldiers were with F Co., 2nd Battalion, 160th SOAR, which had been tasked with support at Fort Irwin’s National Training Center.

The incident report photo was shared Wednesday on the Instagram meme page Daddy SOARbucks before appearing on Reddit.

The Daddy SOARbucks page posted several more memes mocking the company and the battalion over the incident.

The regiment did not immediately respond to a query seeking confirmation of the information shared on social media. It was unclear which law enforcement agency responded to the calls.