Was Georgia Marine in viral video of baby rescue at Kabul airport? DOD is investigating 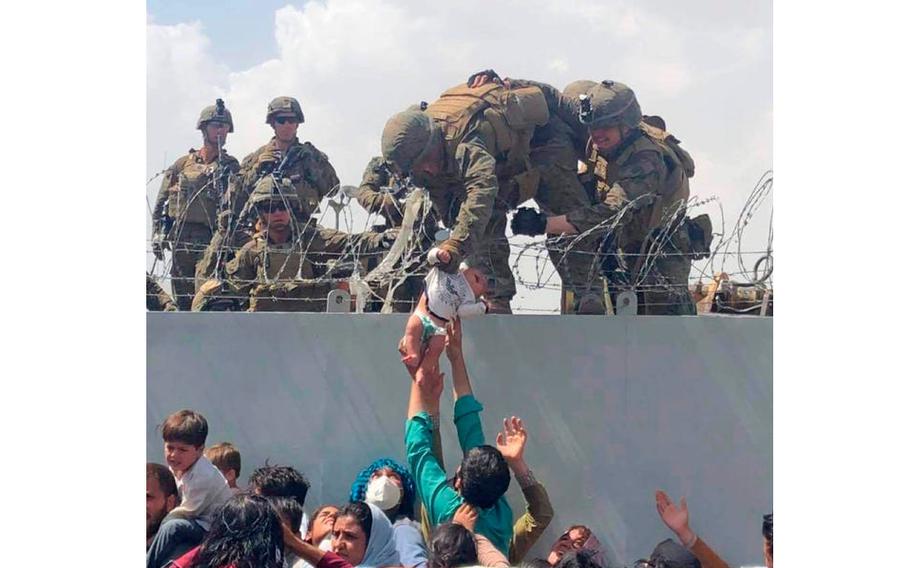 A Marine pulls a baby over the wall at the Kabul airport on Aug. 19, 2021. (Screen capture from video)

(Tribune News Service) — At a rally in Middle Georgia last Saturday, former President Donald Trump introduced a Marine who claimed he pulled a baby over a wall at the airport in Kabul, Afghanistan, an act captured in a viral video.

CNN reported Thursday that a U.S. Marine Corps spokesperson said Lance Cpl. Hunter Clark was not the individual who lifted the child over the wall, and Clark is now under investigation for his attendance at the rally.

During the rally at the Georgia National Fairgrounds in Perry, Trump introduced Clark and invited him to the stage to say a few words.

“We’re also honored to be joined by one of the Marines who bravely served in Kabul during the withdrawal and helped evacuate children over the airport and over the airport wall,” Trump said.

Clark thanked the crowd for their support and said he was glad to be home.

“I am the guy that pulled the baby over the wall, and it’s definitely probably one of the greatest things I’ve ever done in my entire life,” Clark said at the rally.

The crowd followed Clark’s comments with cheering and chanting U-S-A.

Kelton Cochran, a spokesman for the 24th Marine Expeditionary Unit, said in a statement that Clark was not the Marine identified in the viral photo that began circulating around Aug. 20. Multiple Marines helped lift children over the airport wall, and Cochran didn’t specify whether Clark could have been in a different photo or video.

An investigation has been launched into Clark’s attendance at the rally because the Defense Department usually doesn’t allow active duty members to speak at partisan political events.

Further details of Clark’s military service were not available at the time of publishing. A Trump spokesperson has not responded to multiple requests for comment.