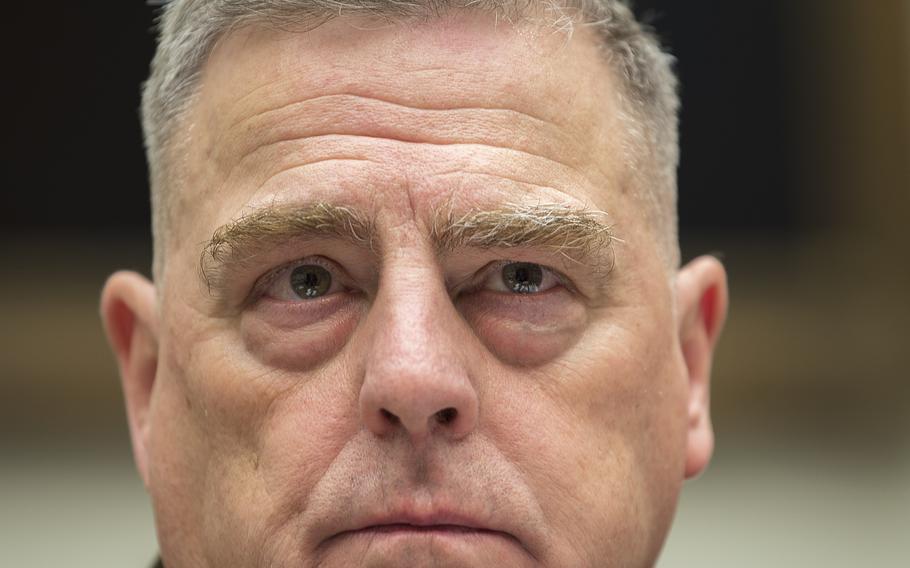 A series of dramatic inside-the-room accounts, including one in which the chairman of the Joint Chiefs promised to alert China's top officer if Trump was preparing to launch an attack, provides new insight into military leaders' response to the previous administration's fraught final period.

But Kori Schake, a scholar at the American Enterprise Institute, said the revelations that Milley covertly acted to counter his commander in chief are "bad for the military as an institution."

"It encourages people to do what Americans are already doing, which is viewing the military as they view the Supreme Court: apolitical when they agree with them, partisan when they don't," she said.

The latest exposé comes in a book by Washington Post journalists Bob Woodward and Robert Costa, who write that Milley, alarmed by the possibility Trump might strike China as he tried to stay in power, reached out to Gen. Li Zuocheng in the months surrounding the 2020 election to dismiss any Chinese fears of a preemptive American attack, they said.

That followed other dramatic accounts involving Milley, including in a book by Washington Post journalists Carol D. Leonnig and Philip Rucker, which said the general likened the circumstances around the election to those of Nazi-era Germany.

"This is a Reichstag moment," Milley told others, referring to the 1933 attack on the German parliament, the book reported. "The gospel of the Führer."

Supporters of the general, a stocky, blunt-talking infantryman, credit him with successfully sheltering the military from Trump's most problematic impulses, then pivoting to serving a president who is different from his predecessor in almost every respect.

"He has been asked to do the most difficult Olympic dive of any of the chairman since Goldwater-Nichols," a 1986 congressional act that cemented the power of the top officer, said Peter Feaver, a scholar on civil-military relations at Duke University. "So when you're evaluating the quality of the dive and evaluating him, you have to recognize that," he said.

Milley "did what he had to do to fulfill his oath to the Constitution and to protect this country," a senior military official said, speaking on the condition of anonymity because he was not authorized to speak on the record.

But critics say that Milley's unusually prominent role in the nation's charged political discourse has the potential to exacerbate the erosion of the military's nonpartisan status that occurred under Trump. Chairmen, who usually keep their military advice to the president confidential, typically keep a low profile and are little known outside government circles.

Trump flouted norms concerning the military, intervening in military justice cases, treating troop events like campaign rallies and referring to the top brass as "my generals."

"Whatever one thinks of the reports on General Milley's actions, it's of great concern that the chairman of the joint chiefs of staff has become a regular topic of political debate, commentary and intrigues," John Gans, a former Pentagon speechwriter, said on Twitter. "This won't end well."

Milley has attracted more attention than many of his predecessors since even before he became chairman. In December 2018, Trump announced his decision to nominate Milley, who was then serving as Army chief of staff, disregarding the recommendation of another candidate by Defense Secretary Jim Mattis.

A former senior official said Trump was fascinated by Milley's medals and "tough guy" swagger. Trump later said he picked Milley to spite Mattis, who has since criticized his former boss.

Perhaps the most searing moment of Milley's tenure occurred in June 2020, as Trump mounted an aggressive response to protests over the police killing of George Floyd. Milley, dressed in fatigues, joined the president as he walked across Lafayette Square outside the White House, which authorities had forcibly cleared of protesters moments before, for a photo op. Pictures of that event appeared to suggest Milley was a willing supporter of Trump's heavy-handed approach.

People who know Milley said he was deeply affected by the barrage of criticism he received from respected former senior officers, and considered resigning. Days later, he issued a rare public apology.

In the months after, Milley appeared to be attempting to atone for what happened at Lafayette Square.

He has issued instructions to the military ranks to remain loyal to the Constitution rather than any individual. After President Joe Biden chose to withdraw troops from Afghanistan despite Milley's impassioned arguments against doing so, the general sought to display his deference to the president's decision.

At other times, though, he has appeared to go out of his way to wade into politically charged matters.

Appearing before the House Armed Services Committee in June, Milley launched a heated counterattack to criticism - which came during an exchange between Defense Secretary Lloyd Austin and a Republican lawmaker - of critical race theory, which examines the societal impact of racism. Some Republicans have asserted that "woke" Pentagon policies, including the lifting of a ban on transgender personnel, distract from the military's core mission.

"I've read Mao Zedong. I've read Karl Marx. I've read Lenin. That doesn't make me a communist," Milley said. "I personally find it offensive that we are accusing the United States military . . . of being 'woke' or something else because we are studying some theories that are out there."

Critics have also responded angrily to the disclosure about Milley's promise to share information with China's top general. Trump called it treason. Sen. Marco Rubio, R-Fla., demanded Milley resign, as did Christopher Miller, who served alongside Milley as acting defense secretary in the final months of Trump's presidency.

Responding to the report related to China on Wednesday, Pentagon spokesman John Kirby said he saw "nothing in what I've read that would cause any concern."

Biden told reporters that he has "great confidence in General Milley."

But some Democrats, while supportive of steps that sought to prevent Trump from illegally staying in office, have privately voiced worries that the disclosures may create a precedent for unelected military officials to go around civilian leaders, despite Milley's admonitions that the military must obey orders if they are lawful.

A former senior defense official said the recent disclosures appeared to reflect the attempt by Milley, starting with the Lafayette Square incident, to shake free of the toll his affiliation with Trump may have on his legacy.

"He's trying to recalibrate and show his bona fides for the new administration," the former official said. "It's not ideal, but it's not unexpected."