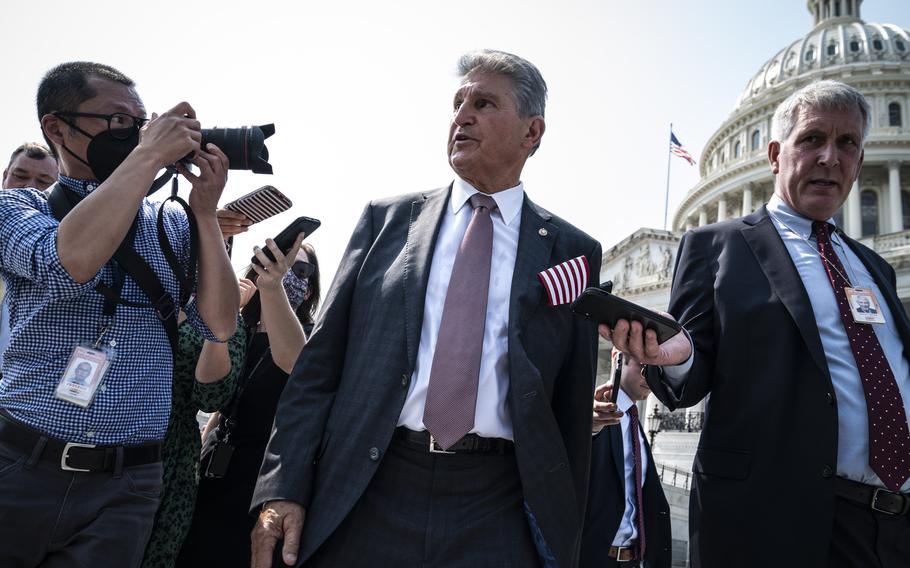 A group of Democratic senators — including key centrist Joe Manchin III of West Virginia — introduced a pared-down voting rights, campaign finance and government ethics bill Tuesday in hopes of building momentum for its passage through a closely divided Senate.

The new Freedom to Vote Act retains significant portions of the For the People Act, Democrats’ marquee voting legislation that passed the House this year but was blocked by a Republican filibuster in June. Those include mandating national minimum standards for early voting and vote-by-mail, establishing Election Day as a national holiday and creating new disclosure requirements for “dark money” groups that are not now required to disclose their donors.

But it also discards significant pieces and tweaks others, largely in an effort to placate Manchin and indulge his hopes of building enough Republican support to pass the bill. Overcoming a filibuster absent a rules change would require the support of 10 Republicans in addition to the 50 members of the Democratic caucus.

For instance, a public financing system for congressional campaigns that would match small donations with federal funds on a 6-to-1 basis has been scaled back to an optional program for House campaigns only, requiring states to choose whether to participate. State and local election officials would have a freer hand to purge voter rolls than under the initial bill, and a provision to change the makeup of the Federal Election Commission, moving from an even split between the parties to an odd number of members in a bid to break partisan gridlock, has been omitted from the revised bill.

While the original bill mandated that states use nonpartisan commissions to draw congressional district lines in order to prevent gerrymandering, the revised bill does not require commissions. It instead creates federal criteria for mapmaking, gives courts the power to enforce them, and allows states to choose how to comply, whether by using a commission or another method.

The Freedom to Vote Act does not include one controversial proposal that Manchin floated in June — a national voter identification mandate. Instead, the bill would create a national standard for the states that choose to require voter ID, allowing them to accept a range of documents as proof of identification, without requiring it in other states.

The new legislation also adds provisions meant to override state-level efforts in GOP-controlled states that some are warning could allow officials to override election results. Sections aimed at so-called election subversion would create federal protections for elections officials and create standards for the handing of election equipment and records.

The revised bill comes at a precarious moment for Senate Democrats, with the party eager to make progress on President Joe Biden’s sweeping economic agenda while facing deadlines to fund the federal government and address the approaching debt ceiling in the coming weeks.

Meanwhile, Democrats are under mounting pressure to address the series of state election laws passed in GOP-controlled states this year in an effort to cut back on early voting, vote by mail, drop boxes and other ballot access measures in response to former president Donald Trump’s false claims of a stolen 2020 election.

And states are already beginning the redistricting process without new federal standards in place to prevent partisan gerrymandering. Nonpartisan forecasters predict that would allow Republicans to net several House seats in the 2022 midterms, further imperiling the Democratic House majority.

Klobuchar said in a statement that the Republican state laws “demand an immediate federal response” and she thanked her fellow Democrats for arriving at a consensus product after weeks of negotiations. “Now let’s get it done,” she said.

Senate Majority Leader Charles E. Schumer, D-N.Y., hosted several of the meetings and said Monday that he expects a procedural vote on the bill “as early as next week.”

“Let me be clear: Republicans refusing to support anything on voting rights is not an excuse for Democrats to do nothing,” he said in a floor speech. “I applaud my colleagues for their hard work and their progress to come together with a very strong voting rights bill that all Democrats can support, while respecting the role of states and promoting greater confidence in our democracy.

Schumer said Manchin has undertaken discussions with Republicans about supporting the bill, but no Republican has emerged as even being curious about supporting new federal voting legislation of the breadth that Democrats are contemplating. Top party leaders, including Senate Minority Leader Mitch McConnell, R-Ky., have insisted that no new national election legislation is necessary, and there is no expectation in the Democratic ranks that next week’s vote will succeed in advancing the bill.

“We don’t think there’s any rationale for the federal government taking over how we vote in this country,” McConnell said in an interview last month.

What is less clear is what will happen next: Voting rights advocates and many Democrats are hoping the sustained GOP opposition will create a put-up-or-shut-up moment for Manchin and Sen. Kyrsten Sinema, D-Ariz., who have both vocally opposed changing the Senate rules to allow legislation to pass with a simple majority vote.

There are no obvious reasons to think that either senator is on the cusp of changing their minds, and with Biden’s economic agenda hanging in the balance, there is little incentive for top party leaders to engage in hardball tactics — at least not yet.

Merkley said in an MSNBC interview Monday night that the drama could play out for many more weeks as Democrats debate among themselves about next steps.

“The dialogue will begin,” he said. “How do we honor our responsibility to defend the fundamental rights of all Americans? ... And that’s going to take some time to work that out. But I really believe that we have to, before the month of October is out — we have to get this voting rights legislation done.”